Malik says every murder in the city is descri­bed as a target killin­g by the media becaus­e of a lack of inform­ation.
By PPI
Published: October 3, 2010
Tweet Email 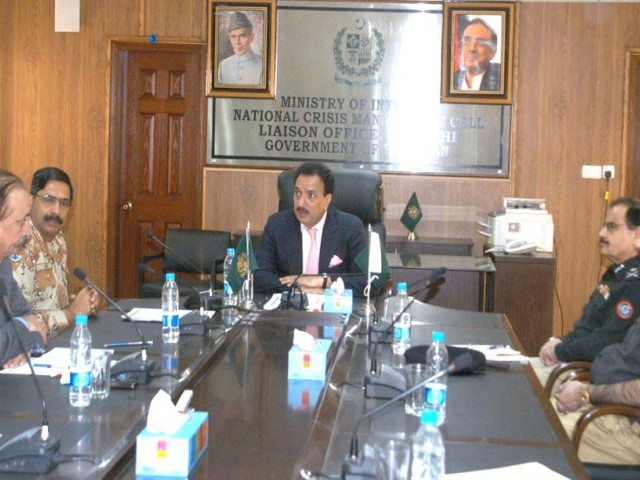 KARACHI: Every murder in the city is described as a target killing by the media because of a lack of accurate information, said Interior Minister Rehman Malik on Saturday. This is not the first time he has chastised journalists on this account.

Malik met the IGP Sindh, DG Rangers Sindh, CCPO Karachi and DG FIA to discuss Karachi’s security conditions. He also instructed the chairman of the Pakistan Electronic Media Regulatory Authority (Pemra) to compile a list of incidents that had been misreported as target killings by the media.

The interior minister directed the names of absconders to be put on the Exit Control List so they could not travel out of the country and for those abroad to be brought back to the country with the help of Interpol.

The minister appreciated the work done by the paramilitary Rangers and the police in arresting people involved in target killings. Malik also thanked the intelligence and law-enforcement authorities of other countries for help in tracking down terrorists who are living abroad and are involved in acts of terrorism in Pakistan.

A taskforce should be established, comprising officers from the Sindh police, FIA and NADRA, to deal with all matters related to terrorism, Malik added.

The minister also sympathised with the families of the 50 police officials who had died in the line of duty and assured them of support and help from the federal government. The minister reviewed the progress on plot allotments for the families as ordered by the president.

He appreciated the police’s work in arresting suspects in 37 out of 50 target killing cases.

He also instructed the IGP Sindh to submit a list of police officials who worked on these cases so that they may be suitably rewarded.

Malik said that he had noted an increase in the illegal business of human trafficking. He told the DG FIA and all the zonal directors to adopt zero-tolerance policy towards offenders.

An intelligence unit has been established within the FIA to report any internal involvement of FIA officials in human trafficking. If any official is found guilty, he will be charged under the relevant sections of the law. The help of other intelligence agencies will also be sought “to weed out the black sheep in the organisation.”

He said that the FIA had made a visible improvement in clamping down on the hawala or illegal money transfer business. The FIA has been asked to check the illegal business of agents going on outside the offices of the FIA and NADRA.

In the end Malik, asked officers of grades 19 to 22 to submit the details of their assests within two weeks.