PM says his countr­y welcom­ed Chines­e invest­ment and would work to create a friend­ly enviro­nment for it.
By AFP / APP
Published: July 5, 2013
Tweet Email 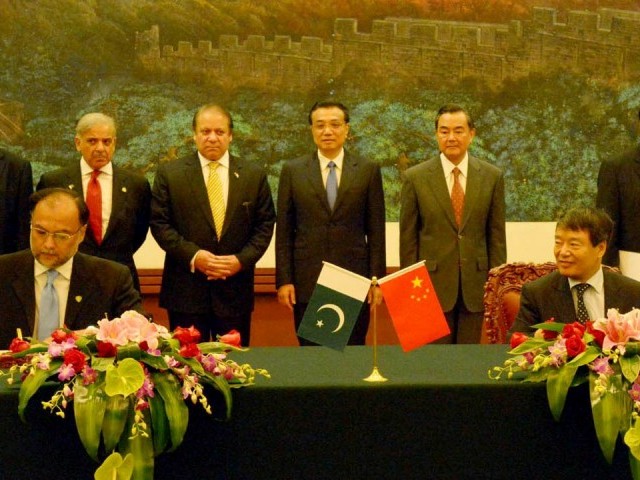 BEIJING: Pakistan and China signed eight agreements on Friday agreeing to strengthen economic and diplomatic ties between the two countries.

One of the agreements includes the construction of a 200km-long tunnel that amounts to $18 billion in cost. The “Pak-China Economic corridor” will link Pakistan’s Gwadar Port on the Arabian Sea and Kashghar in Xinjiang in northwest China.

For the development of the Economic Corridor, the two countries agreed to collaborate on connectivity construction, people-to-people construction exchanges and exchanges between local governments and organisations.

Pakistan reiterated its desire of following a one-China policy, opposing Taiwan and Tibet’s independence and supporting China’s efforts in combating extremism, terrorism and separatism, a statement issued by foreign ministry on Friday said.

Prime Minister Nawaz Sharif on Friday told his Chinese counterpart Li Keqiang their countries’ relationship was “sweeter than honey”, during a visit to Beijing with economic ties at the top of the agenda.

Pakistan and China are close diplomatic and military allies and Nawaz, who is on his first foreign trip since his May election, is looking to secure infrastructure projects to tackle a chronic energy crisis and economic malaise in his country.

At the Great Hall of the People in the Chinese capital, Nawaz said his welcome “reminds me of the saying, our friendship is higher than the Himalayas and deeper than the deepest sea in the world, and sweeter than honey”.

Li told him: “I greatly appreciate your great warmth and deep affection for the people of China.”

The Chinese premier was the first foreign leader to visit Pakistan after Nawaz’s victory at the polls.

Beijing has been involved with the upgrade of the Karakoram Highway as part of a proposed economic corridor between the two countries.

Earlier this year China took control of Pakistan’s Gwadar port, giving it access to the Arabian Sea and Strait of Hormuz, a gateway for a third of the world’s traded oil.

China-Pakistan trade last year reached $12 billion and is targeted to rise to $15 billion in the next two to three years.

On Thursday Nawaz held talks with Chinese President Xi Jinping, amid concerns in his country over weak growth, inflation and power cuts of up to 20 hours a day.

Xi, who referred to Nawaz as an old friend and a good brother, said strengthening strategic cooperation with Islamabad was a priority for China’s diplomacy, the state-run broadcaster China Central Television reported.

Nawaz said his country welcomed Chinese investment and would work to create a friendly environment for it.

The threat of terrorism is also expected to figure during Nawaz’s discussions.

YouTube ban: Ministry of IT says it doesn’t know how to block specific URLs