A thrivi­ng art market and securi­ty concer­ns at home persua­de some Hazara artist­s to stay in the city.
By Sonia Malik
Published: March 10, 2013
Tweet Email 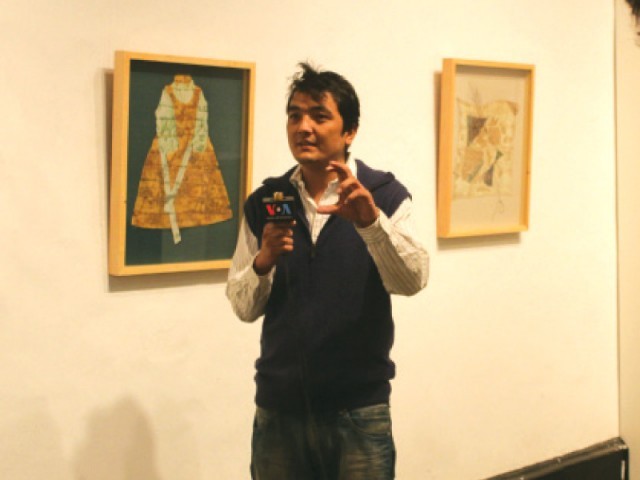 “During General Ziaul Haq’s days [as president] artists Saleema Hashmi and Nazish Ataullah produced work that focused on the oppression of women. Today artists from Hazara extraction are depicting what it is like to live in fear, to be targeted and to live in isolation from other communities in Quetta,” says National College of Arts graduate Shakila Haider.

Haider, 23, resides in Lahore and hopes to have her family join her here. She says her sister, the first female Hazara lawyer, “had to stop her law practice after she started getting threats.”

Many of Haider’s paintings are of her father’s personal belonging. He was killed in Afghanistan during the Cold War.

Several artists of Hazara origin, studying at or recently graduated from the NCA, are producing art which takes its cue from the target killings in Quetta. Most have chosen to live in Lahore because of the security situation in Quetta and the thriving art market in Lahore.

Two out of the three miniature graduates in the class of 2013, displayed art about ethnic violence in Quetta for their thesis.

“No matter how hard we try to create work on themes other than violence, we cannot keep the fear our families live in out of our work,” Haider said.

“Art is a means of expression. Many Hazaras still practice guldozi and naqshkari – art forms that they brought with them,” says Asad Ali Changezi. “The violence will be reflected in our work as long as there is violence,” he said.

Changezi studied at the Punjab University’s School of Art and Design before joining the NCA’s master’s programme in visual arts. He has been in Lahore for seven years.

“My father was a government contractor and my mother worked as an art teacher. They quit working out of fear. I had to live here and make enough to help at home,” said Changezi. He now visits Quetta only once a year.

“During my last trip home, the train was packed with bearded men in turbans. There were only three Hazaras on the train. We covered our faces to avoid a confrontation.”

He got his bachelor’s degree in 2007 from Balochistan University. “All my friends were Pashtun and Baloch. They stopped contacting me after things deteriorated for the Hazaras.” Changezi said this was the common experience of many Hazaras he knew. “Other ethnic groups have moved out of our neighbourhoods and avoid seeing us. There is a sense of isolation.”

Most of Changezi’s work is themed around tolerance. Some of it also focuses on the effect of war on human psychology and the socio-political situation of the Punjab during the lawyers’ movement in 2008.

“But I cannot ignore violence against my own community,” he says. “If I cannot reveal my identity, how can I create art?” asks Ramazan Jafri another 2013 NCA graduate who has stayed behind in Lahore.

“I had wanted to move back to Quetta and teach art but my parents have advised me not to return home. I have had three exhibitions. It’s freer, safer and economically viable in Lahore,” he said.

Jafri says art markets in Lahore, Karachi, and Islamabad are growing. “I would like to move to Karachi in a year. I also have plans to study abroad.”

Jafri lost a cousin in a blast last year in Quetta. “Our minds are geared towards getting away. My entire family is there.” He visits Quetta twice a year. “I never leave home when I am there.”

“Painting is a way of venting anger. It is relaxing and calming. It is a medium in which I can let go,” Jafri added

The artists acknowledged media support in raising awareness about the Hazara situation.

“Many people in Islamabad and Lahore were unaware of Hazaras and their travails before. Many would mistake me for a Chinese or a Korean. They speak to me in English and mistake me for a foreigner. They now recognise us. It is a positive change,” Jafri said.

He says he is often asked about responsibility for the killings. “I blame the government, not Baloch or Pashtuns.”

Haider says people in Lahore and Islamabad are sympathetic. “Non-Hazara Shias gather outside the Governor’s House, the Liberty roundabout or outside the Lahore Press Club and we join in.”

“It is a huge consolation. It means we are not alone … someone else cares too,” said Changezi.