MQM in shock as Karachi mourns

MQM in shock as Karachi mourns

MQM believ­es murder of Farooq was a clear bid to target the party or perhap­s even send a messag­e.
By Gibran Peshimam
Published: September 18, 2010
Tweet Email 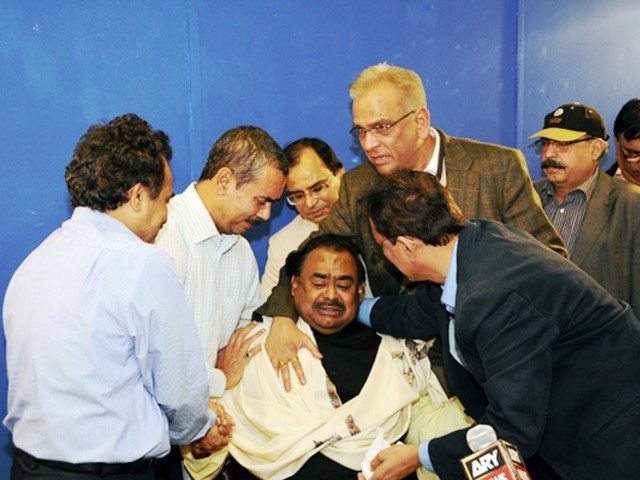 Altaf Hussain is comforted by party officials as he prays in London, for Imran Farooq after his murder by an unidentified man outside his home. PHOTO: AFP

KARACHI: As Karachi ground to a halt on Friday, mystery continued to surround the shocking murder of Dr Imran Farooq in London late Thursday night. The MQM seemed to be clear on one point: The murder of its highest-ranking member after Altaf Hussain himself was a clear bid to target the party.

Perhaps even send a message.

The MQM is under increasing pressure from “a number of quarters” due to the outspokenness of its leader. In fact, an MQM spokesman Faisal Subzwari told The Express Tribune that they had been informed of a new “hit list” of its leadership in Pakistan.

Though he was not active politically, the fact that he was such a key and central figure in the party meant that, by targeting him, the MQM could be hurt badly.

However, aside from announcing a 10-day mourning period, the party has maintained an unnerving degree of silence on the matter up until now.

The party says that there were no specific threats received by Dr Farooq, but most of the MQM’s leadership had been under threat. Dr Farooq, contrary to reports, did not have any guards.

The leadership of the MQM appears to remain in a state of shock – choosing to stay away from the speculations and rumours that have begun sprouting due to the lack of any semblance of answers. That, in turn, seems to have given more fuel to the speculations.

The party says that it is itself in the dark and is counting on the Scotland Yard to conduct thorough investigations into the murder, adding that it is for this reason that it is not looking to say anything on the matter. Altaf Hussain has termed the murder of one of its founding members and one of its chief ideologues the greatest loss suffered by the party in its history.

The confusion regarding the status of Dr Farooq in the MQM was however quelled by MQM spokesman and provincial minister Faisal Subzwari, who said that he remained the Convener of the Rabita Committee till the time of his death. He was “never” removed from the party.

The reason for the suspension remains unclear – but in an interview to a local magazine in 2003, Dr Farooq had said that he had been suspended under party policy. What that policy pertained to remains unclear.

He said that though he was not active politically, he remained a central and key figure, deeply involved in the party’s affairs and its policies. After Altaf Hussain, Dr Farooq was the major contributor to party ideology and literature, said Subzwari.

An emotional Altaf Hussain termed the murder of one of its founding members and one of its chief ideologues the greatest loss suffered by the party in its history. Dr Farooq remained the MQM chief’s closest associate.

By targeting Dr Farooq, said Subzwari, they have very much targeted the MQM.

Fifty-year-old Dr Farooq married in 2004 and was father to two boys.

The Scotland Yard, said Subzwari, has assured the MQM that they are treating this murder as high priority, and not as just another murder.

But as of now there are absolutely no answers. None. No hints either. Never has silence been this muted.