Media bias: Out of sight...

Media bias: Out of sight...

Journa­lists acknow­ledge that bias affect­s decisi­ons regard­ing what news people want to – and should – know about.
By Saba Imtiaz
Published: September 17, 2010
Tweet Email 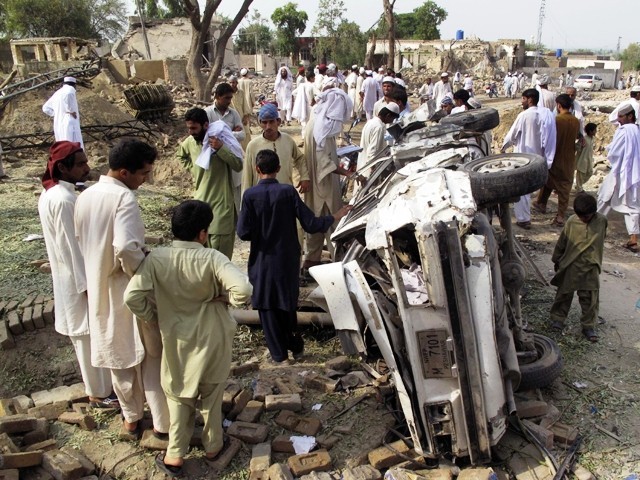 The site of the suicide bombing in the town of Lakki Marwat that claimed 19 lives. PHOTO: REUTERS

KARACHI: On July 9, 2010, two suicide bombers attacked the office of a political agent in Yakka Ghund, Mohmand Agency. A hundred and seven people died and over 90 were injured, the highest toll of any attack this year.

In Lakki Marwat a suicide bomber targeted a volleyball match with an explosives-laden truck, killing 98. One would expect these two attacks to dominate the terror narrative in the country.

Instead, it is the attacks in major urban centres like the RA Bazaar and the Data Ganj Baksh shrine in Lahore, with lower death tolls of 39 and 45, respectively, that are more commonly cited examples of terror in the media.

The media plays a key role in highlighting or downplaying terrorist attacks. Geographic location  is one of the factors that often determines which news is highlighted.

An attack in a town or city is accompanied by on-the-spot coverage, talk-show discussions, front-page headlines, editorials and sometimes investigative reports.

But for those who died in Yakka Ghund or Lakki Marwat, no such space or airtime was dedicated. Journalists acknowledge that bias affects their decisions regarding what news people want to – and should – know about.

Journalist Talat Hussain says a bias exists because “most journalists are from urban areas”. The audience is also urban or semi-urban, and they have no geographical relevance to events in far-flung areas, Hussain adds.

“It is a natural tendency for people to be more concerned with what is familiar,” says Talat Aslam, editor of The News in Karachi. “For example, if an attack happens in Waziristan, people will say ‘Oh, another bomb blast’. But if it happens in Lahore, they’ll want to know if their relatives are fine or if the shop they know is intact.”

The other reason why places at a distance from urban centres do not get a lot of coverage is more practical, according to Aslam. “In places like Lakki Marwat, there are only district correspondents who are not geared to cover bomb blasts.”

Pakistan has been grappling with militancy and extremism for years, but the Lal Masjid crisis in 2007 and reports that the Taliban were ‘within 200 miles of Islamabad’ in 2009 were picked up and played up in both local and foreign press.

Pakistan Press International chairman Owais Aslam Ali, agrees. “Look at the 2005 earthquake. What really got people mobilised was that a building in the Margalla Towers collapsed and everyone knew someone who lived there.” In his opinion, the public and the media have been slow to respond to the floods, “because they have impacted rural areas.”

In a vicious cycle, it seems that the media first helps create certain perceptions and then reacts to them. Ali says that perceptions of far-flung areas have a role to play in their coverage. They are always portrayed as violent, he says, as “they are only covered when a disaster occurs or a horrific crime takes place.”

Quetta, however, is an example of a provincial capital – home to almost daily attacks and target killings – that is largely ignored in the news.

Veteran journalist Siddiq Baloch says the reason behind the lack of coverage in Balochistan is because “it has a ‘special status’.” He calls it a military province. He says that journalists often publish planted stories that are fed to them by the army, the Inter-Services Public Relations or other sources. “There are only a few locals who are reporting from Balochistan.”

Talat Aslam, however, believes that the lack of coverage of Balochistan has to do with the “very real danger” that reporters face, given the “nationalist movement, sectarianism and extremism … it’s a complicated situation. “There is a lot of self-censorship.”