A glimpse of the magnificent Mughals 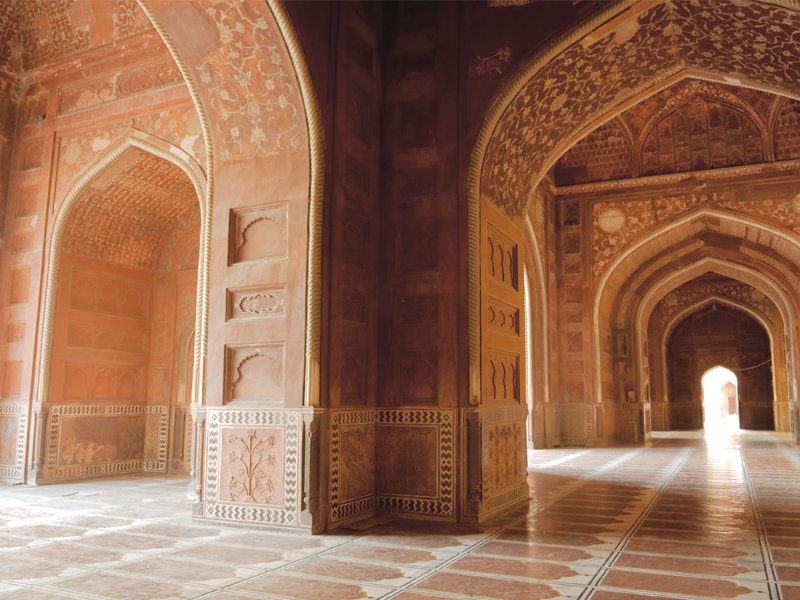 From Babar’s Bagh-e-Wafa to Bahadur Shah Zafar’s defeated golden crown, the Mughal exhibit brings to life the journey of a legendary empire.
Entering the softly lit space with sitar harmonies delicately wafting through the air, one is apprehensive that the Mughal India: Art, Culture and Empire exhibit may present a narrow, clichéd, gift-shop approach to the Mughal dynasty.

Exhilaratingly, it turns out to be a spectacular treasure trove of imperial life, unearthed by curator Malini Roy, from the vaults of the British Library. The knowledge of Mughals that exists around the edges of one’s memory comes to life in the exhibit, pulsating tangibly with the excellence and the grandeur of the legendary empire. The poets, scholars, statesmen, warriors and kings that the Mughals were, is highlighted beautifully as the exhibit unfolds through three centuries of achievements in architecture, literature, astronomy, science and the unparalleled patronage of the arts.

Descendants of Genghis Khan and Timur, the Mughals ruled over South Asia from 1526 to 1858. At its peak, the empire encompassed most of present day India, Pakistan, Bangladesh and eastern Afghanistan. Babar, a Central Asian prince, conquered Kabul, Lahore and ultimately Delhi in 1526. He became the first of 15 Mughal emperors followed by Humayun, Akbar, Jahangir, Shah Jahan and Aurangzeb Alamgir, who are collectively known as the ‘Great Mughals.’ The gradual decline of the empire began when the later Mughal emperors began to face consecutive wars of succession as well as multiple invasions, and struggled to maintain control of a diminishing empire.

The Mughals were highly cultured and cultivated a sophisticated lifestyle based on both the Iranian and Indian examples. Architecture flourished under their patronage; they commissioned fortresses, palaces, mosques and mausoleums as a representation of their powerful stature. One of the greatest accomplishments of the Mughals was to initiate a new tradition of painting. Court historian Abu’l Fazl documented Akbar’s interest with these words: “His Majesty from his earliest youth has shown a great predilection for this art and gives it every encouragement. Hence the art flourishes and many painters have obtained great reputation.” Akbar’s Tasveer Khana was led by eminent Iranian artists and employed more than 100 Hindu and Muslim artists of various skills, for projects that included Hamzanama, story of Ameer Hamza, which took 15 years to complete. Akbar encouraged artists to follow a realistic depiction of subjects, drawing attention to the individual’s features and physiognomy. Many painters and calligraphers collaborated to create manuscripts primarily for the emperor’s private library. The works of miniature painters are riveting representations of their skill and excellence.

The Mughals were keen patrons of literature and Babar himself was a poet and a diarist. A painting depicting one of Babar’s gardens, Bagh-e-Wafa in Kabul in 1504, hangs alongside a detached folio from Babarnama (Memoirs of Babar), where he lovingly describes the details of the garden and the nights he spent there. Turkish Chaghatay was the original language of the Mughals but the literary language was Persian, which was also the preferred language for those who sought a position of influence. Shown here is the outstanding, 17th century, Turkish-Persian dictionary. Commissioned by Akbar, it was arguably the most important Persian dictionary till the end of the 19th century.

Great bibliophiles, the Mughals loved the traditions of fine arts and works of Iranian and central Asian masters. There were 24,000 volumes in Akbar’s library at the time of his death. A folio from “Shahnama” (the book of kings) remains from many books that were looted or given away in later years. Hamida Bano Begum, Akbar’s mother was one of the few Mughal women who had a library of her own. A late 16th century volume of Diwan-e-Hijri from her collection can be seen here. As are Shah Jahan’s books such as “Kabutarnama” — a treatise on the art of keeping pigeons. “The Notebook of Fragrance” dated 1698 is an interesting manuscript intended for gentlemen, containing formulae for perfumes and soaps,  techniques for arranging a house, a garden or a library and for igniting fireworks.

Sciences were actively cultivated and significant advances were made in many fields by combining Indian and Islamic scientific traditions. Humayun had his own observatory where astronomical observations were recorded in tables and treatises. Geography, cartography and gazetteers were vital both for administrative purposes and for data used in compiling astronomical tables and calculating prayer times. Mughal physicians produced detailed medical manuals, some of which are on display. They were aware of the ancient Ayurvedic and contemporary European medicine but were greatly influenced by Unani Greco-Arabic tradition, which still flourishes in India and Pakistan today.

The Mughals ruled a vast empire, accommodating the culture and religion of the diverse peoples inhabiting the land. Peace and harmony of the empire depended on maintaining a balance between the Hindu majority and the Muslim, Christian, Zoroastrian, Jain and Sikh population. The tolerance of the Mughal emperors is a part of their legacy. Depicted in the exhibition are also Akbar’s efforts to hold inter-faith debates, his appointment of Hindu ministers and encouragement of multi-faith marriages and finally, his formation of Din-e-Elahi, a religion of his own, albeit controversial, which combined the features of various faiths.

The exhibit also brings out Aurangzeb’s commitment to religion and Shariah during his reign, symbolised by al-Fatawa Alamgiria, a vast compendium of Islamic jurisprudence in Arabic which took 50 Islamic scholars eight years to complete. The displayed copy originally belonged to Sir William Jones, judge of the Supreme Court in Calcutta.

Presented alongside is Dara Shikoh, a depiction of the diversity of religious thought among the Mughals. Interested in the Sufi, mystical aspect of Islam, Dara Shikoh tried to reconcile Islamic and Hindu doctrines. Also on display at the exhibition is his last work, the translation of the Upanishads, a philosophical thesis of Hinduism, which he called Sirr-i-Akber. It was completed in 1657 and it was through this Persian version rather than the Sanskrit one that the Upanishads reached the West.

There is also a glorious display of the early 19th century collection of exquisitely artistic and calligraphic copies of the Quran, with Persian translation.

In a lit glass case sits the last emperor Bahadur Shah Zafar’s gold crown, set with rubies, turquoise and pearls in floral patterns and arches decorated in gold filigree. Many of the artefacts were acquired from various auctions by Robert Tytler, with the gold crown being sold ultimately to Queen Victoria in 1861. Tytler, an officer of the Bengal Army and an ardent photographer, is known for capturing the famous last photograph of Bahadur Shah Zafar II — a bleak, melancholic image of defeat and ruin. The emperor stares at the camera with vacant eyes, while he awaits trial at Delhi’s Red Fort — reduced to an object of curiosity for European residents, who visited him frequently. This black and white image along with others of the Crystal throne, the Friday Mosque and derelict Delhi are symbolic of the decline of the dynasty. Their inherent greyness is in sharp contrast to the opulence and jewel tones of the illustrations of the lives of the Great Mughals at their peak.

By the end of the exhibit, one has viewed 200 pieces, 20 of which are not part of the Library’s own collection. And just within the span of an hour, we have witnessed an enthralling journey of the empire, from the heights of power to a gradual and tragic decline. 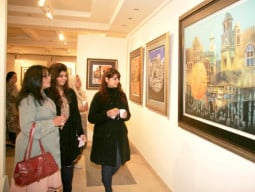 Revivers Art Gallery: An exploration of Mughal architecture and calligraphy 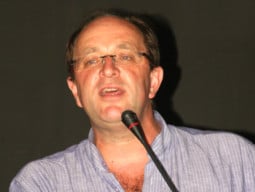 Of Mughals and Afghans ‘It was born in Lahore’

@Yoghurt lover , please dont be so pessimistic. The Mughal court under teh rule of Akbar ruled the biggest size of land. They came up to Deccan in the south which no other North Indian ruler could do.They ruled efficiently and patronised many arts. People were happier way back then than today.

Except Zebunissa and Jahan Ara none of the women from the Mughal period have ever come to light.

I went to this exhibit last month and it was truly spectacular, just as you describe it.

Yoghurt lover(!) Clearly you were there in the time of Mughals. Why not write an exposé on the Mughals yourself - first hand view and all.

Yoghurt lover | 8 years ago | Reply And if anyone wants to see the magnificence of the Mughal rule of India, all they have to do is look at the present day Pakistan. Present day Pakistan is exactly how the Mughals ruled India. Poor were crushed, the rich led lavish lives at the cost of the poor. The rest of the issues/anarchy/lawlessness of Pakistan is right before our eyes to see.
Yoghurt lover | 8 years ago | Reply

"The Mughals were highly cultured and cultivated a sophisticated lifestyle based on both the Iranian and Indian examples."

Except for one or two the rest of the Moghuls were barbarians who treated both muslim and Hindu commoners as dirt. They enjoyed a lavish lifestyle but the commoners remained poor. Why do you think Indian muslim population is still so downtrodden?

"Architecture flourished under their patronage; they commissioned fortresses, palaces, mosques and mausoleums as a representation of their powerful stature."

Muslim architecture is known for sheer size. Otherwise there is hardly any intricacy, sophistication of art to their buildings. Just compare Taj Mahal to the temples of Hampi. One a big building built on the graves of thousands of slaves. Another an exemplary treasure of art.

"“The Notebook of Fragrance” dated 1698 is an interesting manuscript intended for gentlemen, containing formulae for perfumes and soaps, techniques for arranging a house, a garden or a library and for igniting fireworks."

Igniting fireworks? This shows how ignorant the Mughals were.

"Sciences were actively cultivated and significant advances were made in many fields by combining Indian and Islamic scientific traditions. "

This is a baseless assertion. Mughals were as regressive as the present day Pakistan is.

Akbar is not a muslim by any standard. he started his own religion called Din-e-lahi.

This is a euphemism of forced conversion of Hindu women, which is practiced even today in Pakistan with much gusto.

Aurangazeb was a brute, who murdered Hindus/sikhs/jains/buddhists alike. Is this what you mean by commitment to Sharia? Guru Tej Bahadur was executed by Aurangazeb because he opposed forced conversion.

Ms. Gina Hassan, you can write these lies in Pakistani text books. On a public forum like this, you will be slapped with truth on your face.