A life in writing: ‘Had I been in Pakistan, I wouldn’t be a writer’

A life in writing: ‘Had I been in Pakistan, I wouldn’t be a writer’ 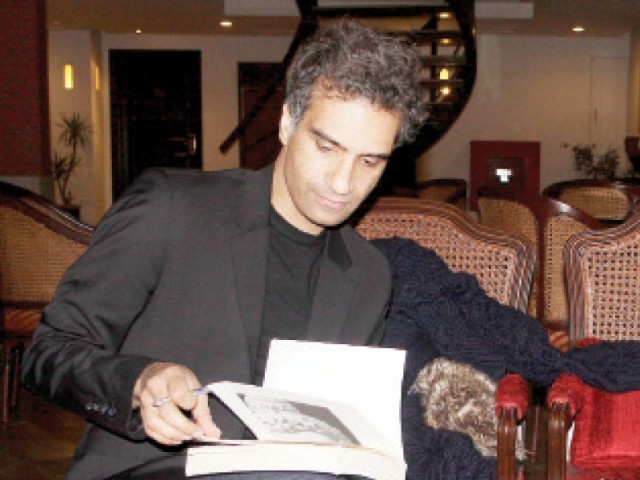 Aslam has won the Betty Trask Award (1994) and the Author’s Club First Novel Award (1993) for Season of the Rainbirds and The Encore Award (2005) and The Kiriyama Pacific Rim Book Prize (2005) for Maps for Lost Lovers. PHOTO: SHAFIQ MALIK/EXPRESS

How good can you become, at 27, at a foreign language that you started learning in your late teens? If Pakistani-British writer Nadeem Aslam, who turned 47 this month, is anything to go by, the answer is ‘very’.

Aslam, who won several awards for his first two books— Season of the Rainbirds and Maps for Lost Lovers— says he did not know a word of the English language when he first moved to Huddersfield, West Yorkshire in England in 1980 after his father, a communist, fled General Zia’s regime.

To learn the language, he copied entire novels by hand – taking particular notice of where to put the punctuation marks and how to make paragraphs. Among the books were Nabokov’s Lolita, Gabriel García Márquez’s Autumn of the Patriarch, Bruno Schulz’s The Street of Crocodiles, Herman Melville’s Moby-Dick, Toni Morrison’s Beloved and Cormac McCarthy’s Blood Meridian.

His recent novel, The Blind Man’s Garden – from which he will be reading at the Lahore Literature Festival today – took him four and a half years to complete. The book is set in Pakistan and Afghanistan, as was its predecessor, The Wasted Vigil.

Aslam, who hails from Gujranwala, says his books are set in this region because whatever happens here, politically and socially, affects him in “good and bad ways”.

Surprisingly, he says he wouldn’t have been a writer had he remained in Pakistan. “I would [have been] working to contribute to my sister’s dowry, as I don’t come from an affluent family. I come from a mohalla.”

He thinks the youth in Pakistan are forced into fulfilling responsibilities much earlier than the youth in the West, even before they “identify [who they are] and [are aware of] their potential”.

Growing up under Zia regime, Aslam says he had always wanted to explore what the ‘war’ had brought Pakistan “… the refugees, the militant infiltration, the heroin trade and jihad.”

Aslam’s latest book also revolves around the same subject and tells the story of young people and the challenges that they have been given as a consequence of the war in the region.

Aslam’s books are known for their juxtaposition of unimaginable violence and beauty.  Of this he says, “I cannot write about violence without mollifying it with beauty. I want my readers to continue reading through the violence and darkness in hope of finding beauty and light, which they do.”

He says people often tell him they find his novels “sad”. When he tells them they are meant to also give hope, they are taken aback.

“I tell them [that] at any given moment, when… harrowing things [are] happening to [the characters], they always behave with honour and believe as much in a heroic life as in a heroic death. The hope is in how my characters behave.”

Aslam’s main source of research for his books is newspapers, followed by personal observation and first-hand accounts. For his latest book, he says, after a year’s worth of meetings and discussions with visually impaired people in the UK, all he had were blank notebooks. “I just couldn’t make them share their intimate experiences. So I decided to put myself in their shoes,” he says.

For a week, Aslam lived with a blindfold around his eyes round the clock to experience the “dark life”, which he said was “horrible”. He pinned two nails on the kitchen floor next to the stove to know where to place his feet and wore thin-soled shoes to feel the ground. He remembers how the black changed to red when he accidently touched something hot and how stars sparkled in his mind’s eye as he felt raindrops on his palms.  At one point in The Blind Man’s Garden, Rohan, the main character describes the same sensations. Aslam repeated the experience for a week for the next two years.

Aslam, who also paints, says he prefers to write in complete seclusion. While writing, he “falls into the deeper layers of who I am, oblivious to the surroundings.” In order to help his reader live his characters’ experiences, he says, he lives them first.

Aslam says he thinks of writing as a job. He says whenever he goes for a walk, he notes down things that he finds interesting. His notes go into his ‘record books’ that are numbered by the years. He has been doing it since he was 17. The notes, he says, help him write.

As he pours tea into his cup and tears the sugar sachet, he notices that it has double the amount of sugar as a sugar sachet in England. This, too, will go into his record book.

So what’s next for the author? It seems he is more than ready with future plans. He has 11 more novels in line, all mapped out already. Currently, he is working on a book about blasphemy laws in Pakistan. He has already decided on the name: One Thousand Miles by Moonlight. The inspiration, he says, came from former Punjab governor Salmaan Taseer’s murder. Aslam plans to launch the book in 2015.

He says he is not a religious person. Religion, for him, is about consequences. “The lesson [of all religions] is the same. Do good, get good and the other way around.”

He condemns drone attacks but is quick to explain that this does not mean that he supports the cause of the extremists. Similarly, he says, when he condemns target killings in the name of religion or sect, it does not mean he approves of everything the West is doing. He then recites verses by Polish poet Czeslaw Milosz: ‘If there is no God, Not everything is permitted to man’.