A freedom fighter lost in the pages of history

A freedom fighter lost in the pages of history

His valour still echoes in the pages of histor­y, his determ­inatio­n, many say, knew no bounds.
By Shaikh Israr
Published: January 21, 2013
Tweet Email 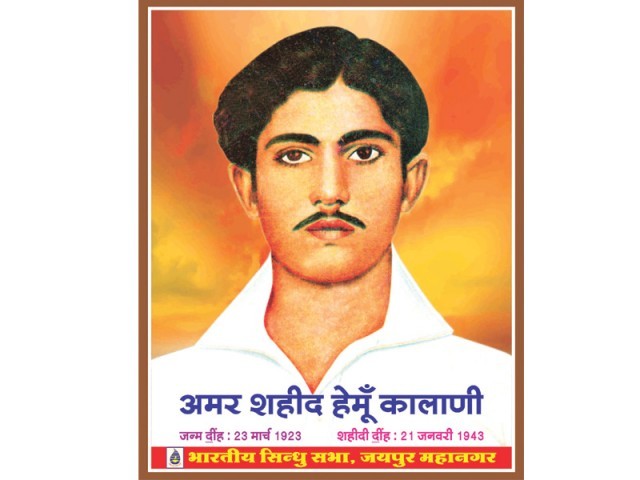 Just 18 years old when he was caught red-handed, imprisoned and tortured for attempting to loosen the fixings of the railway track .

Seventy years ago this day, a forgotten freedom fighter was hanged in Sukkur Jail (now Central Jail Sukkur 2) under the British Raj.

Hemu Kalani, originally from Sukkur, was given the option of relaxing his sentence for a simple written apology — but he remained steadfast and unapologetic.

His valour still echoes in the pages of history, his determination, many say, knew no bounds.

Just 18 years old when he was caught red-handed, imprisoned and tortured for attempting to loosen the fixings of the railway track in his hometown in a bid to derail the train which was carrying special troops of the European battalions.

Young Kalani was informed on October 23, 1942 that a train was carrying weapons which would be used against freedom fighters in Sindh. He along with friends decided that the train will not be allowed to go ahead.

Perhaps lost in history, it is still unclear who caught him.

But according to writer Dr Amir Abbas Soomro, a security guard of a biscuit factory near the track caught him and handed him over to the police (information the writer says he gathered from Kalani’s younger brother Tekchand).

Accounts of his story reveal that Kalani asked his friends to run away before being caught by authorities and never disclosed their names despite being tortured mercilessly.

His case was being heard in a Martial Court and his lawyers, Pirzado Abdul Sattar, failed to prove him innocent before the British Raj.

Sattar made an offer to Kalani’s paternal uncle, Dr Manga Ram: If Kalani could sign a written apology, the British would relax his death sentence but Kalani simply refused.

Upon hearing the news his mother, Jethi Bai, rushed to the Sukkur jail and begged her son to accept the terms of the apology.

Kalani refused to apologise for saving his land.

Today, 70 years on it seems the hero of Sindh has been lost in translation.

While India pays homage and celebrates his death anniversary as a sign of resilience, very few are aware of his sacrifices here except a few nationalist parties who take him as a hero.

A post stamp of Kalani’s name was issued by former Indian premier Indira Gandhi in 1983 and several roads, schools and parks have been named after him in different cities of India.

So highly placed is this historical legend that the Indian parliament boasts a statue of Kalani on its premises.

His uncle Dr Manga Ram was also a freedom fighter and Kalani was inspired by his struggle against the British Raj.

According to Kalani’s neighbours, his family migrated to India after the partition of the subcontinent and resided in Chamber Camp, Mumbai. His younger brother, Tekchand, still lives in Mumbai and is 71 now.

At one point in time, Jawaharlal Nehru himself visited Kalani’s family and announced pension for his mother after his death.

Today, Iftikhar Shah possesses the house that once was home to Kalani in old Sukkur.