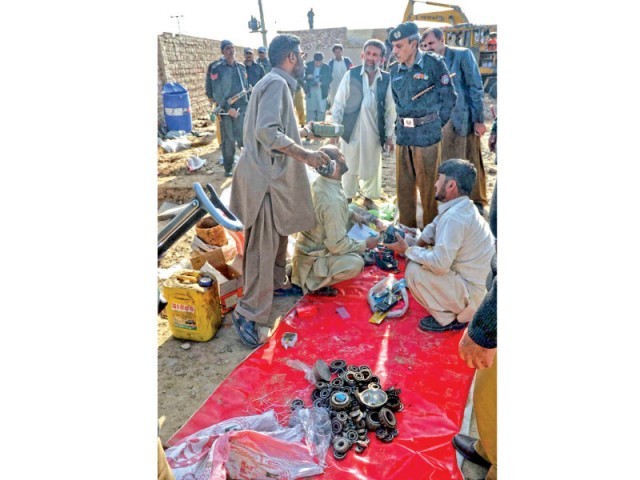 Police and officials of bomb disposal squad categorising the seized arms, ammunition and explosives recovered from a vacant plot in Quetta. PHOTO: PPI

Police conducted an operation and recovered a huge cache of arms and explosives buried at Eastern Bypass in Quetta, Express News reported on Wednesday.

CCPO Quetta Mir Zubair said that SP Saryab Amanullah Kakar received a tip-off in the morning, after which the police launched an operation. The team deployed at the site was tasked to excavate and find the weapons and explosives.

CCPO Zubair said that the weapons included hand grenades, pistols, rifles, Kalashnikovs and a large amount of explosives. The official added that the Kalashnikovs recovered belonged to soldiers who were killed a few days back.

“Out of the Kalashnikovs, four belonged to the soldiers who were killed in an attack earlier. They are a property of the district police,” said the CCPO.

He further said that the excavation was under process, adding that the operation might lead the police to the culprits responsible for killing the soldiers.