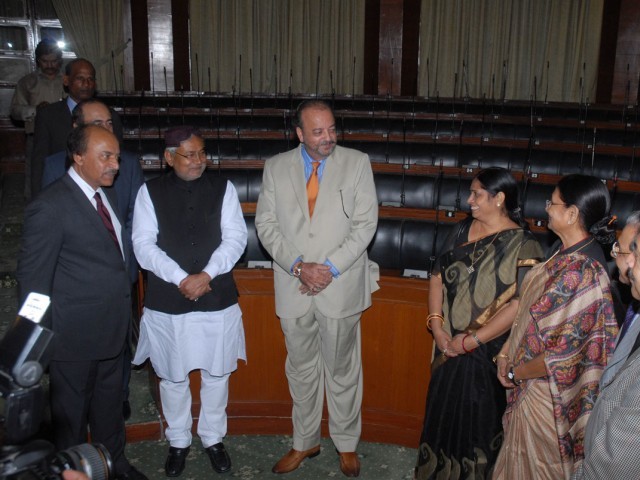 KARACHI: Chief Minister of Indian State Bihar, Nitish Kumar said on Saturday that history and culture of India and Pakistan were common and opined that effective results could be achieved if the two countries worked jointly for establishing peace and tranquility in the region.

Addressing a seminar on ‘sharing experiences of Sindh and Bihar’ held at Shaheed Benazir Bhutto Banquet Hall of Chief Minister’s House, he recalled that great civilizations existed along the Indus and Ganga rivers thousands of years ago and the people used to get education from the centers located here.

Kumar stressed that brotherly relations and peace would bring progress and prosperity in the region, a need of the hour.

Stating that he has come here with the best wishes for the people of Sindh and Pakistan, the Bihar Chief Minister shared policies of good governance that his government introduced in Bihar. “We have focused on provision of justice, maintaining peace, development of human resources, infrastructure and agriculture besides female education.

Kumar said he has invited Sindh Chief Minister to visit Bihar along with a delegation of parliamentarians.

Speaking on the occasion, Chief Minister Syed Qaim Ali Shah shed light on development policies and projects of government besides devolution of federal ministries under the 18th constitutional amendment. He claimed that media and judiciary were free in the country and despite energy crisis, unemployment, price hike and other problems, the government has devised an effective policy for resolving the issues.

Shah further informed that that 5600 acre land has been distributed among landless women peasants, and new engineering and medical universities have been established, new highways built, Rs42 billion spent on construction of flyovers in Karachi, 34000 families given free of interest loans, rehabilitated 9 million flood affected people and appointed 16000 teachers and 3000 lecturers.  Moreover Zulfiqarabad, a new city is being built near Thatta to attract foreign investment, he added.

The Sindh Chief Minsiter said that despite unsatisfactory law & order thousands of people from other provinces come to Karachi daily while foreign investors are investing capital capital in the Thar coalfields.

The Indian dignitary said Sindh was the center of culture and he was happy to be here.