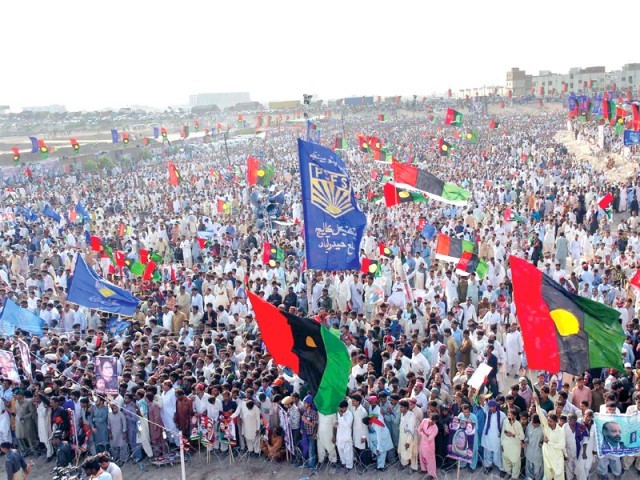 It was a long time coming.

Though in power, the Pakistan Peoples Party (PPP) had plenty to prove – particularly in its bastion of power, Sindh. Criticised, counted out, and even physically attacked by opponents, the ruling party finally hit back – that too with a high level of confidence.

At a grand political show of strength in Hyderabad on Monday, PPP’s top leadership let loose a barrage of criticism against political opponents ranging from the Pakistan Muslim League-Nawaz (PML-N) to Sindhi nationalists.

The most potent criticism of the PPP in recent days has been at the hands of the Sindhi nationalists in the aftermath of the passage of the new Sindh local government ordinance – a law that the nationalists alleged worked against the province’s interests.

On Monday, the PPP not only defended the new law, but passed a resolution in its favour in front of tens of thousands of party supporters – who attended the rally despite high security risks. The gathering also paid tribute to President Asif Ali Zardari, and expressed confidence in his leadership as well as that of Sindh Chief Minister Qaim Ali Shah.

Among those who addressed the rally was former prime minister Yousaf Raza Gilani.

He said that refusal to write a letter to the Swiss government has consequently strengthened the country’s institutions. “Today, the judiciary has accepted that the president has immunity,” he told the public meeting.

Gilani paid for his defiance of a Supreme Court order when the court declared him ineligible to hold the office of the prime minister in June. But, he said, his stand on not reopening the graft cases against President Asif Ali Zardari has been justified. “I consider that my sacrifice has not gone in vain.”

For the detractors of the party, Gilani had history lessons. He said that, over the last four-and-a-half years, the PPP government brought 104 amendments to the Constitution. He claimed that all this legislation was done in consensus with the allies and opposition parties.

“It was Musharraf who weakened the provinces by bringing all the districts directly under control of the federal government,” said Gilani. “We restored the provinces’ authority over their cities through the 18th [constitutional] amendment.” The former prime minister invited the nationalists for a dialogue, but warned them that they cannot frighten the government with violence.

Gilani also questioned the veracity of a recent survey that showed the popularity of the PML-N and Pakistan Tehreek-i-Insaaf to be greater than that of the PPP. “Such surveys can’t take into account the people’s voice which is evident today,” he said, pointing out the large turnout at the PPP rally.

There was a sense of confidence in party leaders’ words.

The stage was set for Sindh-based PPP leaders to come out fire and brimstone – which they did, in particular Chandio, who hails from Hyderabad. A fiery Chandio not only rubbished the electoral threat put forward by nationalist parties, but also said that these small groups were being controlled by non-Sindhi forces and agendas.

Another Sindh-based leader Makhdoom Amin Fahim declared that the PPP’s vote bank was never broken in the past and would never break in the future either.

Federal Information Minister Qamar Zaman Kaira pointed out how the PPP has survived in power with only 127 MNAs in the National Assembly, against a required number of 172, and said that, by doing so, it had prevented the country from breaking up. He thanked the people for attending the meeting and also by doing this owning the PPP. “No power can weaken the PPP,” he thundered.