The end?: Thumbs up for Naek’s Swiss letter

The end?: Thumbs up for Naek’s Swiss letter 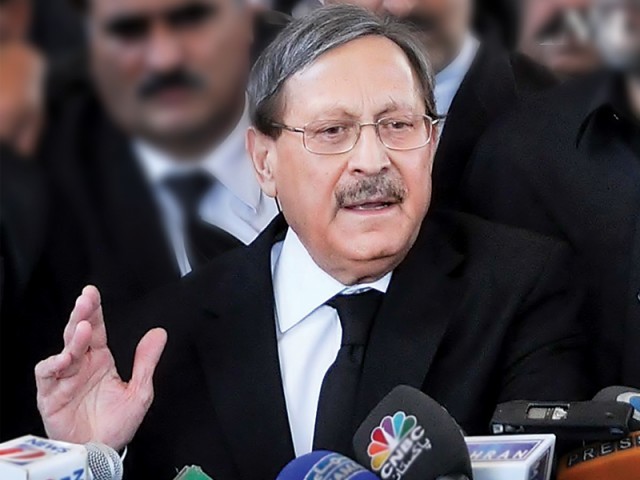 ISLAMABAD: The judiciary and the executive abandoned their maximalist positions on the Swiss letter and finally met halfway through on Wednesday.

The approved draft states that former attorney general Malik Qayyum’s letter to his counterpart in Geneva, stating that the federation of Pakistan does not seek to be a party in cases involving the Pakistan Peoples Party (PPP) co-chairman and his family, be retracted and considered “never written.”

The ruling PPP has taken around three years to implement the court order in the National Reconciliation Ordinance (NRO) case. The party lost one prime minister in this legal battle before conceding that the former attorney general’s correspondence with Swiss authorities was illegal.

Legal experts say the “middle way” worked in this highly-public tiff as the court allowed the federal government to mention presidential immunity as an international norm, and the government withdrew from mentioning Article 248 of Pakistan’s Constitution specifically.

Last month, after years of sparring, the executive and  the judiciary deadlock saw a breakthrough when Prime Minister Raja Pervaiz Ashraf agreed to write the letter, and assigned Law Minister Naek to complete the task.

Justice Asif Saeed Khosa, head of the five-member NRO judgment implementation bench of the apex court, announced they are almost at the conclusion of the issue.

The bench appreciated the role of Law Minister Naek in resolving the issue, and said he served the national interest.

Naek also appeared relaxed at the breakthrough. He requested the court to retract the contempt notice issued to Prime Minister Raja Pervaiz Ashraf, to which Justice Khosa said the letter issue should be resolved in its entirety first.

Upon Justice Khosa’s inquiry, the law minister said the letter would first be translated into French, and then sent through the Foreign Office. He requested four weeks to complete the task, and was granted the same. The hearing was adjourned till November 14.

Wednesday’s court order states that proof of actual receipt of the communication by the Attorney-General of Geneva should be produced before the court on the next date of hearing.

The bench also asked Naek to place on the record of this case copies of the summary for the prime minister, the premier’s order authorising Naek, the authorisation letter, and the final letter dispatched to Switzerland.

Meanwhile, the review petition against court order, filed on Tuesday, was dismissed by the court. Experts said it was filed as a bargaining chip anyway, and the law minister did not press on it either, once all issues related to the draft letter were resolved.

Trial of the president

Would the president face a trial before Swiss authorities?

Naek said no trial would be held because there is no case in “that country’s court.”

“There was no case there in the past, there is no case now and nor will there be any case in the future; hence a trial is out of question,” Naek said.

He added that there had only been investigations.

“The letter states that Malik Qayyum’s letter be withdrawn and our reservations are without prejudice to the rights, the legal rights, to the defences of the presidents/heads of state, under the law, under the constitution and under the international law,” Naek said.

At the outset of the hearing, the five-member bench had retreated to the judges’ chambers to deliberate over the draft submitted.

Justice Khosa read the draft aloud in court after returning from the chambers, and said the letter is ready to be sent to Swiss authorities.

What happened behind closed doors, journalists asked Naek.“They summoned me as a law minister and expressed their reservations, and I expressed mine and the federation’s,” Naek said.

He added that everything was done with transparency.

Judges were strict back then

Barrister Aitzaz Ahsan, the counsel of deposed prime minister Yousaf Raza Gilani, said the judges were strict and no similar option was presented to him when he was arguing this case.

He said he was happy to see the court adopted his arguments regarding the federal government’s concern about presidential immunity.

He said he believes President Zardari will not face trial, and indicated that former premier Gilani has legal remedy to challenge his disqualification on grounds that his concern was not considered at that time.

Responding to critics: Malala promised opposition would never deter her