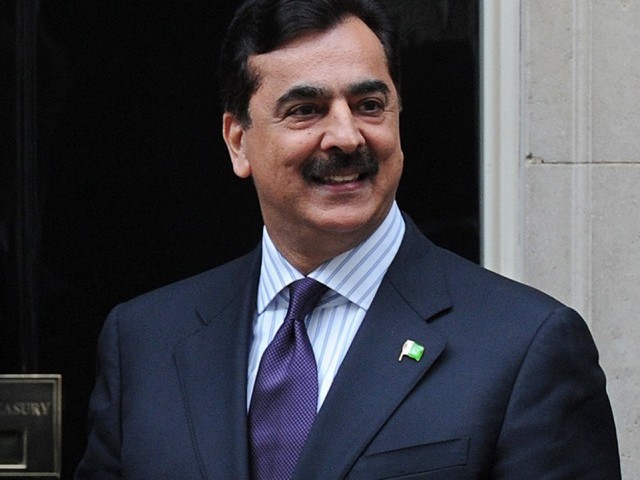 Court says Gilani has been ineligible since April 26. PHOTO: AFP/FILE

ISLAMABAD: The Supreme Court of Pakistan on Tuesday declared Prime Minister Yousaf Raza Gilani ineligible to hold office, Express News reported. The court said that he had been ineligible since April 26.

He has been declared ineligible to be prime minister ever since the verdict in the contempt case had been announced.

The Election Commission of Pakistan, following the court order, issued the notification of Gilani’s disqualification.

Gilani will not be a member of parliament following the verdict, and his name was also removed from the Press Information Department website.

“Yousaf Raza Gilani is disqualified from membership of parliament from April 26, the date of his conviction. He has also ceased to be the prime minister of Pakistan,” said Chief Justice Iftikhar Muhammad Chaudhry, reading the order.

“The Election Commission shall issue a notice of disqualification and the president is required to take necessary steps to ensure continuation of democratic process,” he added.

(Read a copy of the short order here)

Express News reports that Gilani can appeal against the verdict within 30 days.

Former Election Commission secretary said that after the Supreme Court verdict, Gilani has been disqualified for five years, and added that he also cannot hold any official post in the party.

Khyber-Pakhtunkwa Assembly session was adjourned for five minutes in protest of the Supreme Court’s verdict.

Following the verdict, all federal cabinet ministers stopped using the security protocol assigned to them. National flags were also removed from their vehicles.

The Muttahida Qaumi Movement (MQM) also held a meeting after the verdict was announced, during which the party decided to accept the Supreme Court’s verdict.

Punjab Chief Minister Shahbaz Sharif, while talking to the media, said that Pakistan Muslim League – Nawaz (PML-N) will not present any candidate for the post of the prime minister.

He added that the Supreme Court gave this verdict in the petition filed by PML-N which demanded Gilani’s disqualification.

“If he [Gilani] had supported the Constitution and the judiciary, and had not protected a beneficiary of the NRO, then Pakistan would not have been seeing this day,” Sharif added.

Earlier, concluding his arguments in the Speaker’s ruling case, Attorney General Irfan Qadir said that the immunity provided to Gilani cannot be taken away anyone but the Parliament and that he was not answerable to any court.

Qadir was told to wrap up his arguments by 11am today.

The judicial bench observed that being an attorney general, Qadir should assist the court proceedings, rather than defending a party.

The attorney general also said that the contempt of court law was made in the colonial era when the sub-continent was operating under the British rule.

Earlier, Qadir had said that the judges who announced the verdict of the contempt case against Gilani were “more inclined towards disqualifying him” than deciding whether it was a contempt case or not.

He had said the parliament has the right to reject court’s decision if it decides against the Speaker’s ruling.

The attorney general had also presented a resolution of the parliament before the bench, which stated that the parliament had confidence in the speaker, Dr Fehmida Mirza’s decision.

Justice Khilji Arif Hussain had observed that the job of the court was to interpret law and that it will continue doing so “no matter what anyone thinks”.

The chief justice had said that the court respected the parliament and that they should do their job while the court does its own.

The attorney general had read out an article written by a judge of the Indian Supreme Court that stated that people are free to criticise the judges and discuss about them. Justice Arif had interrupted him and had said that he should discuss the case than wasting the court’s time.

The petitions, including those filed by PML-N and Pakistan Tehreek-i-Insaf (PTI), had challenged the speaker’s ruling and demanded prime minister’s disqualification after he was convicted of contempt by the apex court.