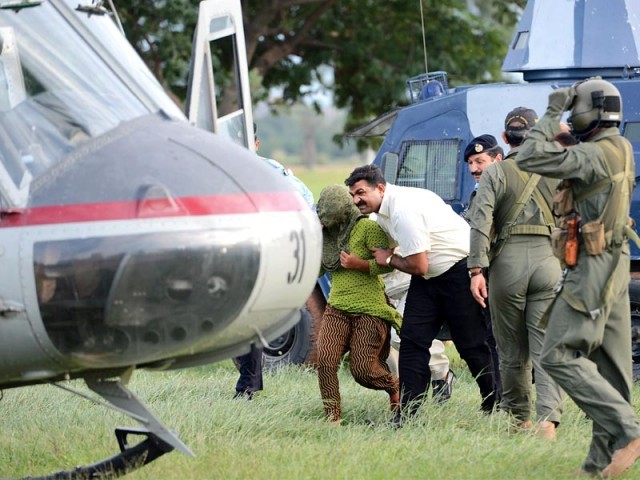 The judge observed that the accused was not as significant as the accusation that had been levelled against her. PHOTO: AFP/ FILE

A lower court judge on Friday reprimanded police officials for not submitting a charge-sheet against Rimsha Masih, a minor mentally disabled girl accused of blasphemy on trumped up charges. Justice Aziz Khan of the District and Session court ordered the police investigators to submit the charge-sheet in three days.

During the hearing, Investigation Officer (IO) Munir Jaffri claimed that investigation was under way and requested the court for more time.

Justice Khan expressed his annoyance at the delay and directed the IO to submit the charge-sheet on September 17.

Rao Abdur Rahim, the complainant’s counsel, requested the court to cancel the accused’s bail. “If a prime minister appears before the apex court when he is summoned, why did a girl accused of committing blasphemy not appear?”, he questioned. The counsels representing the girl did not appear before the court.

The judge observed that the accused was not as significant as the accusation that had been levelled against her.

Meanwhile, the investigation officer suggested the court hold the trial inside the jail due to the sensitivity of the case. Opposing the suggestion, Rahim said Rimsha had been granted bail, therefore an open trial should be held.

Earlier on September 7, the court had granted bail to the accused against two surety bonds of Rs500,000 each. She was flown off in a helicopter to an undisclosed location afetr her release from jail.

The girl was arrested on August 16 for allegedly burning a primer, a booklet used to familiarise children with Arabic as written in the Quran. The Ramna police station had registered a case against her on the insistence of a mob incited by a cleric who was later arrested for planting the evidence against the girl.

Fearing a backlash, Rimsha’s family fled from the area, while locals handed over the girl and her mother to the local police.

Art that interacts with the viewer