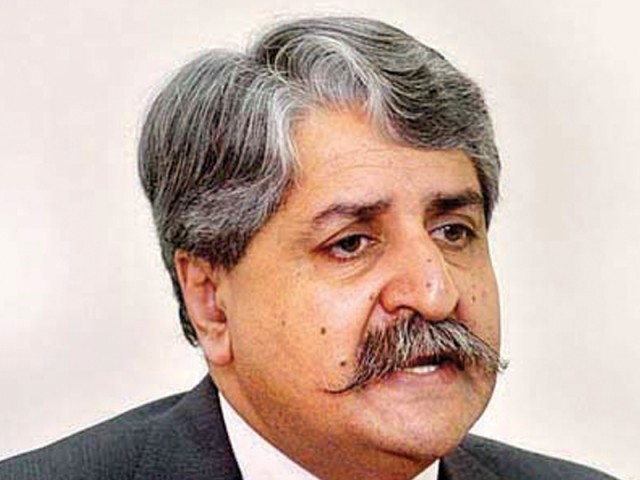 Defence Minister Syed Naveed Qamar, who is heading the special cabinet committee on Balochistan, said that a handful of armed insurgents who have taken positions on mountains do not represent the entire province.

“Our committee is approaching all other stakeholders, including nationalist leaders, to find an amicable solution to the festering issue,” Qamar told journalists after interactions with political leaders at the Chief Minister Secretariat on Saturday.

“We believe in dialogue. We do not mind visiting all those political and nationalist leaders – the genuine representatives of Balochistan – who did not show up today,” he added.

“Though the Balochistan issue is complex, we are not hopeless,” Qamar said. He went on to add that a handful of disgruntled Baloch were not the real issue of Balochistan.

Referring to the fluid security situation in the province where highway robberies, kidnapping for ransom and targeted killings are rampant, Qamar said the federal government was determined to restore normalcy.

“We are aware of the injustices committed to Balochistan in the past. And we are here to identify the areas where we can work to heal the wounds with our sincere efforts to the province that belongs to Pakistan,” he added.

Qamar conceded that little had been done in the past for the people of Balochistan, but added that the PPP-led government was determined to win the hearts and minds of the disillusioned Baloch people.

He added that committees alone could not rectify the wrongs done to the Balochistan people over the last 60 years. “But we are still hopeful that things would be settled with the passage of time,” he said.

Another delegation, including JUI-F, BNP-Awami, Pashtunkhwa Mili Awami Party and Jamaat-e-Islami, met the cabinet committee and gave suggestions for steering the province out of the current mess.

Dr Malik of the National Party and Dr Jehanzeb of the Balochistan National Party called for creating an environment conducive for talks with the stakeholders.

Dr Jehanzeb claimed that the committee was consulting the non-Baloch in order to hoodwink the people. They demanded resolving the issue of missing persons.

JUI-F parliamentary leader in the Balochistan Assembly Maulana Abdul Wasay said they had no expectations from the special committee of the federal government on Balochistan. “Without accepting the constitutional rights of Balochistan its issue cannot be resolved,” he told media persons after meeting the committee.

Information Minister Qamar Zaman Kaira told the media that the central government was making serious efforts to address the grievances of Balochistan.

He recalled an apology from President Asif Zardari to the people of the province in his first address to the Parliament for the excesses of the past.

“The Cabinet committee’s visit to Quetta will focus on finding a durable solution to the Balochistan issue,” he added. He said the issue of provincial autonomy has been resolved but some people were shouting the slogans of an “independent Balochistan” which would not be tolerated.

The committee will present its interim report to the Cabinet on August 15.