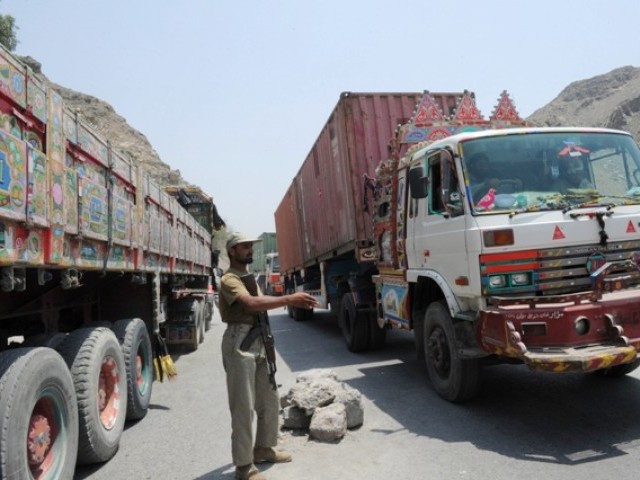 A paramilitary soldier stands guard near NATO supply trucks on their way to the Torkham border on July 12, 2012. PHOTO: AFP

CHAMAN: Trucks carrying supplies for NATO troops in Afghanistan crossed the Pakistani border on Thursday for only the second time since Islamabad agreed to lift a seven-month blockade, officials said.

Pakistan closed overland routes for NATO convoys going to its war-torn neighbour after botched US air strikes killed 24 Pakistani soldiers in November, plunging ties between the “war on terror” allies to a new low.

Islamabad agreed to reopen the routes after US Secretary of State Hillary Clinton said sorry for the deaths on July 3.

But traffic has been sluggish.

Until Thursday, only a few trucks had been cleared to enter Afghanistan, with thousands of truck owners awaiting compensation before going back to work, and saying the trips into Afghanistan are too dangerous and too poorly paid.

The Pakistani Taliban have threatened to attack NATO supply trucks and kill drivers if they resume trips to Afghanistan.

On Thursday, the umbrella militant organisation threatened a further wave of attacks, and claimed responsibility for shooting nine police prison officers being trained in the eastern city of Lahore.

In the northwestern tribal district of Khyber, officials said seven to 10 trucks loaded with NATO supplies were due to cross the Torkham post for the first time since Pakistan agreed to resume supplies.

“All of them will cross the border today,” customs official Ubaid Ullah told AFP.

But in Karachi, where NATO containers begin their long journey to Pakistan’s two Afghan border crossings from the Arabian Sea port, many are waiting for compensation from subcontractors for being out of work for seven months.

“We are too wary, too anxious and too cautious about the situation. It was dangerous to go overland before the government ban, but now the dangers have increased,” Akram Khan Durrani, president of the All Pakistan Oil Tankers Owners Association, told AFP.

“No one from the authorities have contacted us properly and assured us of fool-proof security,” he said.

“Except for some trucks which were stuck elsewhere and have settled their payment issues with the contractors, none have started moving,” he told AFP from Karachi.

“Subcontractors have started installing satellite trackers on trucks as a means of security, but still there is no nod from the government, which has to arrange fool-proof security for the operation.”

Officials in customs and at the ports and shipping ministry, who wished not to be named, said it would still “take a few days” to finalise compensation and was unable to give a specific date for trucks to leave Karachi.

The Home ministry in Sindh said it was finalising a security plan, but declined to go into details.

“You see how many people are opposing it? Earlier, we only feared the Taliban, but now we’re afraid of many people and groups,” said truck owner Mohammad Asghar.