These unprot­ected famili­es are left to fend for themse­lves and someti­mes they miss out of meals three times a day.
By Fawad Shah
Published: August 16, 2010
Tweet Email 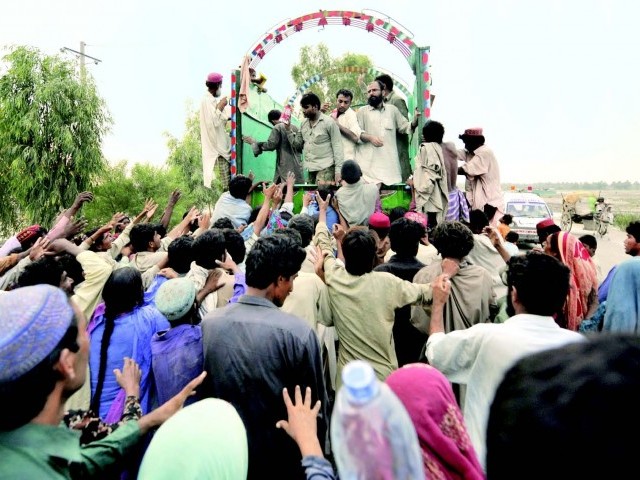 People struggle for relief items as they are distributed from a truck on the outskirts of Sukkur Sunday. UN chief Ban Ki-moon has urged the world to quicken aid for up to 20 million people hit by Pakistan’s worst humanitarian crisis as he flew in to visit areas ravaged by record floods. PHOTO: AFP

SUKKUR: It is survival of the fittest in relief camps as men snatch food and water from unaccompanied women and children. These unprotected families are left to fend for themselves and sometimes they miss out of meals three times a day.

The Pakistan armed forces cannot seem to find a solution to the problem. “There is no way we can ensure that women and children are receiving the relief goods. Somewhere on their way back, a group of men snatch the food from them,” explained Flight Lieutenant Mubasher. “We do not have enough human resources to handle the situation. There is no way to ensure foolproof ration distribution.”

Food trucks from the armed forces and the city district government park outside the camps and two to three people in the back of the trucks throw out food supplies. Survivors, in their desperate state, want the food so badly that they do not make lines. The army says that they cannot possibly control the crowd that ranges from 400 to 500 at a time. In the ensuing chaos, women and children are left behind as men elbow and fight their way to the front.

Children, because they are short, are similarly deprived as their tiny arms cannot reach for the food. So women and children are forced to return when the army truck will come again. Most of the time, however, the same men get food supplies three to four times in a day while some families cannot get a single piece of bread.

Sukki, 44, went to get supplies when the army trucks were distributing food at night. She could not get anything. She was unsuccessful even in the morning when more food was distributed at 8:30 am. “We haven’t had anything to eat the whole day,” she complained. In reaction, Sukki’s 12-year-old daughter learnt her lesson and successfully snatched a roti from someone. But she was the only one who enjoyed the feast as the scrap of bread was too small to share.

“In an ideal situation, people would stand in queues and we would write down their names as we distribute food. But we do not have the human resource to manage 500 people at one time,” explained Mubasher. “With limited human resources and limited food, we just distribute what we have. We ask people to come one at a time but of course that does not happen.”

He said the armed forces cannot be blamed as they cannot control what goes on in and around each camp. “We cannot hit people. So there really is no way to curb this.”

As for the men, they are in no mood to be confronted. “We also take food for our women and children. We don’t just take it for ourselves,” said a defensive Omar, 35.

This is only the begining of the crisis as scores of livestock saved by flood survivors is now getting sick or dying.

Doctors warn that in the next couple of weeks the situation will be completely out of control and could result in an epidemic. As you travel across the Sukkur Barrage bridge, straight ahead lies the Naz Bypass. The bypass is lined with tents.

While walking, right before the relief camps begin, you can see livestock on the edge of the road. Some are alive, most are dead.

The stench of dead animals is everywhere.

People line the bypass too, on charpoys and some scraps of material lying on the road. There is no room for people and their livestock, especially those who are ill.

In the medical camps, doctors are only able to provide first aid. A seven-year-old child came to the camp bleeding from her nose and ear. Flight Lieutenant Haroon said first aid was given to them and they were sent back. “There is no other option,” he said.

Neither can people needing treatment be admitted anywhere nor can they be referred to hospitals anywhere.

“Along with skin diseases, there is an outbreak of diarrhoea and gastroenteritis,” said Haroon. “Most children under 15 years of age and women over 40 are affected.” The situation might worsen as doctors do not have soft water to give to children. Doctors, armed forces personnel and city district government officials are finding it extremely difficult to cope with the increasing problems and the emergence of new ones.

It is also difficult to keep a record of anything. The relief camps are not even named as new ones keep springing up on a need basis.