Passen­gers say plane first took off at 1 pm but landed again after 45 minute­s due to a burnin­g smell from the plane.
By Mudassir Raja
Published: June 9, 2012
Tweet Email 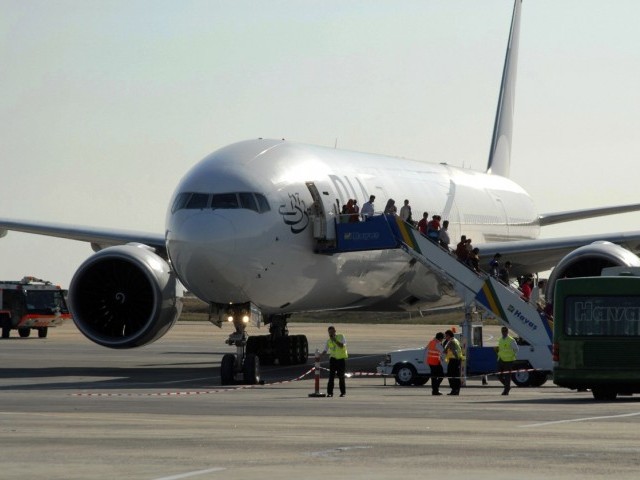 Passengers said that they first took off at 1pm for Dubai but landed at the airport after 45 minutes. PHOTO: REUTERS/FILE

RAWALPINDI: Passengers travelling to Dubai in Pakistan International Airlines (PIA) flight on Saturday finally departed for their destination after languishing at the Benazir Bhutto International Airport (BBIA) in Islamabad for at least nine hours, The Express Tribune learnt.

PIA flight PK-211 took off at 1pm, as per schedule. However, passengers were surprised to receive instructions to prepare for a landing after being in the air for only 45 minutes. Moreso since they had booked for a non-stop two hour flight to the Emirate state.

Passengers were later told that the air craft was making a safe landing at BBIA after crew had detected a burning smell in the fuselage, a passenger told The Express Tribune.

Passenger Hamza Abbasi said sine the plane landed back at the air port it had taken off from. He said the crew of the flight informed the passengers that a technical problem had occurred in the plane and another plane was being arranged from Karachi to keep up PIA’s responsibility of completing their journey. The other plane, passengers were told, would reach Islamabad by 6pm. However, what awaited them was more misery than relief.

Already waiting at the airport for close to three hours, when passengers boarded the changeover aircraft, they were made aware of another technical fault in their new aircraft and were subsequently offloaded.

“It has been four hours since the change of the plane but we are yet to take off,” Abbassi said. Narrating information he had received from the crew, he said that the plane had developed some communication faults and that the engineers were currently trying to repair the plane.

When contacted, PIA Spokesperson Sultan Ahmed said that when PK-211 took off, crew noticed an odour of stuff burning, emanating from the storage bay. Pilots then followed standard operating procedures and returned to BBIA for a full inspection. This inspection was still underway.

Ahmed added that initial investigations had shown that a shipment of mangoes in the cargo hold of the plane contained carbide, a chemical used for catalysing ripening of fruit. The chemical had a reaction to the moisture in the cabin, causing it to effervesce and create fumes.

As luck would have it, the spokesperson said that the new plane requested to take passengers to Dubai too developed fault. He added that as soon as the faults are removed the flight will take off.