SIU SSP Waris presen­ted the four guards to the press at the SIU headqu­arters during a press confer­ence on Thursd­ay.
By Our Correspondent
Published: May 11, 2012
Tweet Email 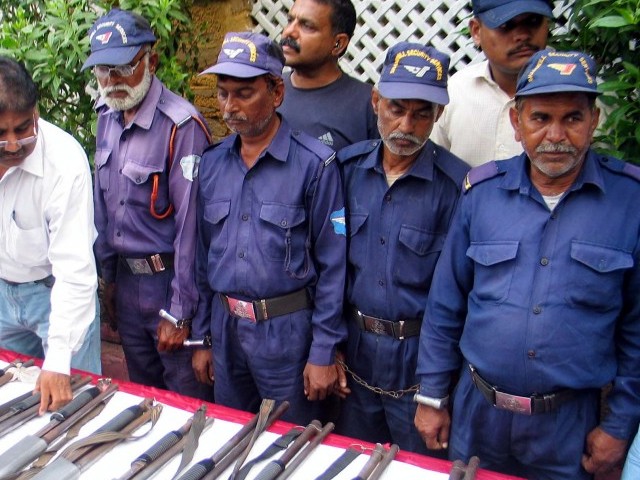 Waris presented the four guards to the press at the SIU headquarters during a press conference on Thursday. PHOTO: PPI

Shamwill Security Company literally turned out to be a sham when the Special Investigation Unit (SIU) arrested four of its armed guards without any authority letter or serial numbers on the guns.

SIU chief SSP Khurram Waris said that these arrests are just the beginning of thorough investigations into many private security companies in the city. He added that some companies conduct careless background checks on hired guards while others are just posing as security companies but may actually be involved in crimes.

Waris presented the four guards to the press at the SIU headquarters during a press conference on Thursday and said that while they are innocent, they are inadvertently involved in the possession and transportation of illegal weapons.

Farooq said that the company is run by a Major Asif and the other guards include a carpenter, a dhobi and an electrician.

“I have provided the banks the standard operating procedures on how to hire and train guards but most of them have not implemented our protocols,” said Waris.