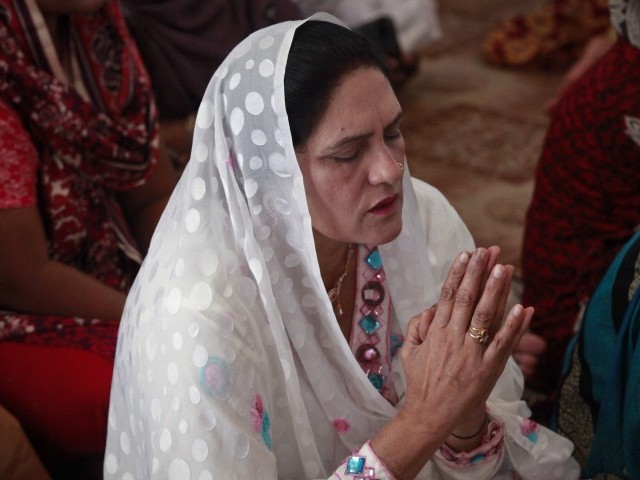 A Pakistani Christian prays while attending Easter celebrations at the Cathedral of the Sacred Heart of Jesus in Lahore. PHOTO: REUTERS

Joyous hymns by the choir filled the air in St Anthony’s Church on Sunday, which was decked in white and gold ribbons for Easter.

People dressed in their Sunday best, commemorated the resurrection of Jesus Christ by attending midnight Mass and another in the morning. “The energy is usually at a higher level during midnight Mass, which goes on for three and a half hours,” said one person. “Some people are so tired and sleepy afterwards that they miss the morning service.” The youngsters who turned up late for morning Mass still rubbing their eyes, proved his point.

Father Melito Dias, clad in robes that matched the luminous colours of the church, delivered the morning sermon. “I have never heard of a man who died and came back to life, except for Jesus,” he said. “This feast is theoretically the greatest feast of the year.”

As he spoke about how the Rising of Jesus was a blessed and happy moment, the congregation broke into hymns including Save Our Lord and Our Savior. Fr Dias blessed them with holy water.

Eat, greet and be merry

In the second part of the Mass, Fr Dias was offered the host and sacramental wine. The services wrapped up with hymns of Hallelujah, handshakes and Easter greetings.

The small circular white hosts, called the Bread of Life, were offered. After the last blessing, Fr Dias distributed Easter eggs among the excited children and senior citizens. Mary, a young girl in a flowery dress, held up a large pink one. “I can’t wait to eat all the candies inside the egg,” she beamed.

And for others it was a tradition that gathered family and friends. “For the past twenty years, I have been organising a lunch at my home after the prayers,” said Christine Francis. “It is a day to be spent with loved ones.”

Damper in the joy

Although Easter Sunday day went by smoothly, some people struggled with challenges that were less than spiritual in nature. Asif Masih, a resident of Old Golimar, lamented how the law and order situation interfered with their midnight prayers. “The rangers were carrying out an operation and had cordoned off the area because of which we couldn’t start our prayers on time.”

Over the weekend, load shedding also dampened the mood. Zahid Farooq, a social activist, said that 12 churches in North Nazimabad had to wrap up their services before time because of power outages.