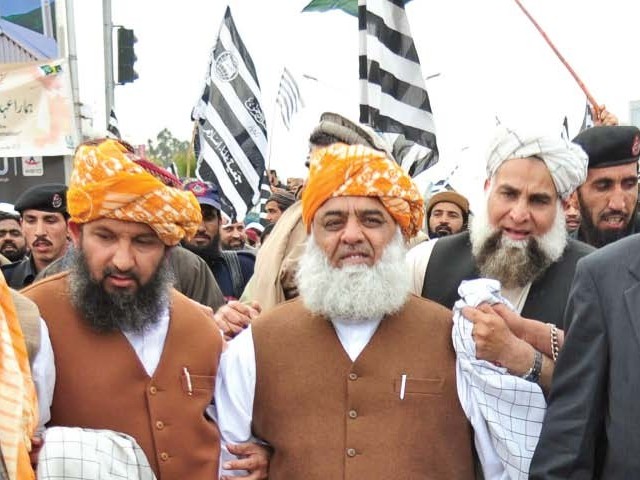 Members of the all-party, bicameral panel expressed concern over what they felt were moves by the United States to pressurise Pakistan to reopen Nato supply routes.

Impressing upon fellow lawmakers that he is firmly against reopening the Nato supply route, with or without conditions, Jamiat Ulema-e-Islam-Fazl (JUI-F) chief walked out of the Parliamentary Committee on National Security (PCNS) meeting.

Maulana Fazlur Rehman said neither his party, nor the entire religious right, is ready to accept the decision of reopening the NATO supply route.

“I want to warn the government that if it tries to influence the decisions and proposals of the parliamentary committee, the fallout would be worse than expected and they will not be able to handle it,” he said.

Fazl, and some other committee members, also expressed their reservations over the announcement of $10 million bounty on Jamaat-ud-Dawa chief Hafiz Saeed and termed it “an act of open aggression.”

The panel members deplored the ‘ill timing’ of the US decision and said the US is still not interested in respecting Pakistan’s sovereignty, which is highly regrettable.

Panel chairperson, Senator Raza Rabbani, termed the US decision unfortunate and said the US has gone ahead with it despite the fact that the situation, vis-à-vis Pak-US bilateral ties, is already not in their favour.

“I believe this decision could have an extremely negative fall out,” Rabbani said.

Rabbani assured them that the government will not bypass the PCNS, and that he will talk to the prime minister and ask him to “dispel the rumours.”

On drone attacks, members from across party lines said the issue should be discussed with the US on all levels and strikes should be suspended.

Some panel members also demanded an extension to the ongoing joint session of parliament, saying it will provide more time to discuss the sensitive issue of revisiting Pak-US ties. The panel chairman said the extension is the president and the prime minister’s prerogative.

Earlier, Rabbani welcomed Pakistan Muslim League-Nawaz (PML-N) representatives back to the committee proceedings and briefed them over the points discussed during their absences. Other committee members also lauded the prime minister for his initiative to call PML-N chief Nawaz Sharif and convince him to rejoin the PCNS proceedings.

The PML-N had boycotted the committee’s sessions in protest against the recent fuel price hike. PML-N’s Senator Ishaq Dar, who is an active participant of the PCNS, was not present during Thursday’s meeting either.