Fahmid­a Riaz did not talk about the pros and cons of transl­ation, instea­d she focuse­d on poetry.
By Our Correspondent
Published: February 12, 2012
Tweet Email 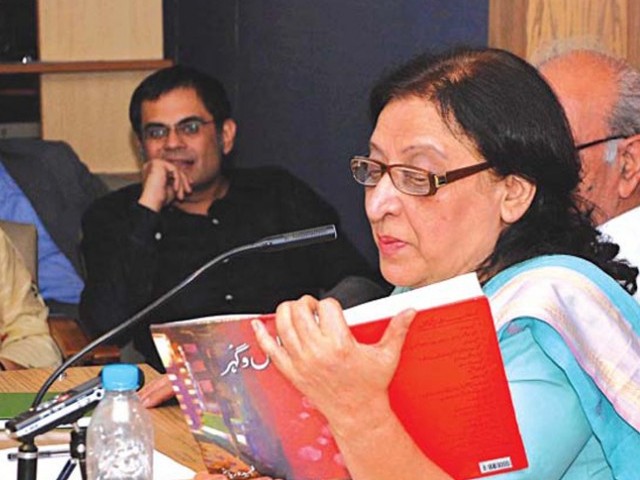 As soon as she started reading her poems in Urdu, there was applause. PHOTO: MUHAMMAD JAVAID

Neither of the two were a concern for Fahmida Riaz, who was the main speaker at the Karachi Literature Festival’s session on ‘Poetry, Fiction and Translation.’ She would not discuss the merits and demerits of the translations of the works of Urdu poetry and fiction and nor would she dwell on the methods and techniques employed to undertake this exercise. She said her problem was simply that it was only possible to gain greater recognition, reach a maximum number of readers or a global audience through the medium of English.

It was apparently for want of a desired level of scholarship to handle the theme that Fahmida avoided a critical discourse on the topic of the day and instead preferred to recite poems after reading a few of her translations of Shah Latif’s poetry.

That is more true in the case of Urdu, where diction and syntax are more important  than the idea it conveys. But arguing that “bridges are bridged by translations,” she refused to subscribe to the assumption that ‘you [can] either be a creative writer or a translator.’ She was modestly critical of Urdu newspapers for the amount of space they devote to Urdu literature. “I am a writer of Urdu but get more writes-up in English newspapers,” she lamented.

It was an unresponsive audience till Fahmida Riaz continued with her discourse in English. But as soon as she started reading her poems in Urdu there was applause.

This prompted a questioner to remind Fahmida that her advocacy of English was wrong. “Look, you spoke that long in English and there was no response from the audience. And as soon as you have finished your poem, see how appreciative and responsive people are.” Columnist and social activist Harris Khalique was the moderator of the session.