Justic­e Essa earlie­r said if Bashir doesn't come in the given deadli­ne, then he will be held in contem­pt of court.
By Web Desk
Published: February 9, 2012
Tweet Email 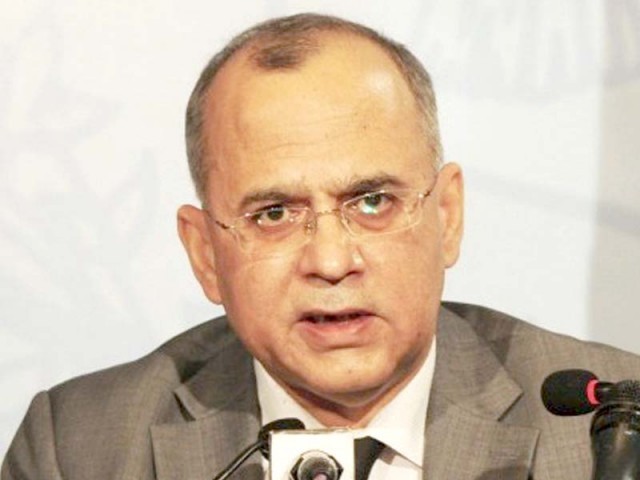 Justice Essa earlier said if Bashir doesn't come then he will be held in contempt of court.

ISLAMABAD: The Memogate commission has once again directed the attorney-general of Pakistan to write to BlackBerry manufacturer Research in Motion, requesting retrieval of data from the handsets allegedly used for communication between Mansoor Ijaz and former ambassador Husain Haqqani.

The commission, in a session on Thursday, also directed Foreign Secretary Salman Bashir to provide details if a data-sharing agreement exists between Pakistan and Canada.

Earlier, the commission adjourned hearing till 9am on February 10, Express News reported.

Bashir was summoned to appear before the commission on a half-hour deadline and managed to arrive at the IHC before the deadline ended.

Justice Qazi Faez Issa had said that if he does not appear before the commission within the given deadline, he will be held in contempt of court.

The court expressed dissatisfaction over the deputy attorney-general’s statement that RIM had given its reply on January 28, and said that if RIM had written a letter on January 28, then why was it not submitted to the court.

Justice Isa questioned if the respondents “did not understand English” and said that the commission had clearly stated that all the documents relevant with the case be submitted to the court, and by not doing so, the government has violated the court’s orders.

The commission observed that if the government continued doing so then the Defense Secretary Nargis Sethi will be asked to attend every hearing of the commission.

Bashir came to the court with his lawyers who will represent him in front of the commission.

Before entering the IHC, the foreign secretary was seen consulting the attorney general on the court’s premises, Express News reported.

The commission resumed the hearing today, headed by Justice Isa, who said that the foreign ministry is creating hurdles in the way of the investigation.

Justice Isa said that if it was told earlier that Ijaz will not be coming to Pakistan, then it would have not only saved time but also resolved the case.

The commission resumed the hearing today, headed by Justice Qazi Faez Isa, who said that the foreign ministry is creating hurdles in the way of the investigation.

Ijaz’s counsel Akram Sheikh said that he was appearing before the court “voluntarily” and that the court, according to Pakistani laws, does not hold the authority to summon Ijaz.

He said that if Ijaz comes to Pakistan, the Parliamentary Committee on National Security would also summon him, in reply to which Justice Isa said, “Now you are taking a U-turn.”

Justice Isa added that earlier, security was being made an issue and now the parliamentary committee.

Sheikh prayed to the court that the location for recording Ijaz’s statement be changed to Zurich or London from Dubai. Justice Isa questioned that what is the guarantee that if the court’s representatives go abroad, Ijaz will have his statement recorded.

Ijaz has been summoned by the parliamentary and judicial commissions investigating the case, and has twice refused to come to Pakistan despite assurances of proper security.

In the request, Sheikh had said that Ijaz has a security threat if he comes to Pakistan and there is also the danger that he might be arrested on false charges or evidence might be taken away from him.