At the campus, you aren’t promot­ed to 2nd year withou­t 30 hours of servic­e.
By Rabia Ali
Published: January 18, 2012
Tweet Email 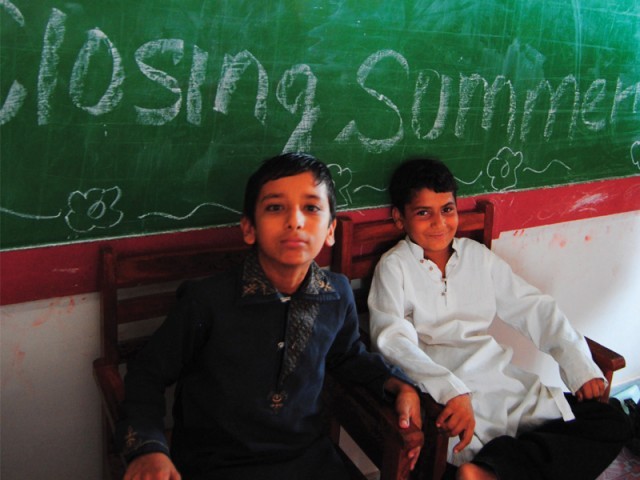 At the campus, you aren’t promoted to 2nd year without 30 hours of service.

KARACHI: The Social Service Society of Foundation Public School’s (FPS) A-Level campus is working on making this kind of work mandatory for all A-Level schools in the city.

According to Muneer Iqbal, the chairperson of the society, he and his peers are already in touch with students from other schools to push for this demand. Meanwhile, the school’s society plans to publicise the cause at events in different schools. “As youngsters, we should contribute to the society by helping those who are in need,” Iqbal said.

At the FPS A-Levels campus, all of the 120 first-year students have to do mandatory community service of 30 hours to be able to pass to the second year. They are free to choose what kind of work they want to do.

They can, for example, teach at government schools, tend to the elderly at shelter homes, or spend time with the mentally or physically challenged or those suffering from life-threatening diseases.

“Community service is greatly needed at government schools because they are in a deplorable state,” said Iqbal. “If educated people like us step forward, we can make a huge difference.”

Another student, Hamza Masood, also at FPS, believes that community service also gives students applying to universities abroad an edge. “Foreign universities prefer students who have done social service,” he said. “Even the top universities in Pakistan, like the Lahore University of Management Sciences, give credit to social service.”

But Masood does not do charity work because it will get him admission to a foreign university. According to him, at the end of the day it is satisfaction that one gets from helping the people that matters.

“I went to Dar ul Sukoon five months after I did community service there,” he said. “I was delighted when two children recognised me and called me by my name. They made me realise that our visits meant a lot to them.”

It seemed like students of other A-Level schools feel the same way. Saba Basit, who studies at Nixor College, believes that students should be made aware of how important serving the community was.

“Community service should be made mandatory but students should know what they are doing is important for the community rather than it being imposed upon them,” said Basit. “Social service does not only mean going to hospitals or old homes. It means that we can also help others in our neighborhoods as well.”

Though community service is not compulsory at Nixor, Basit says that there are still 20 groups of students who do charity work. Basit herself heads the Nixor Culinary – the group cooks food and then serves it the underprivileged once a week.

Sadia Syed Ali, an A-Level teacher, said that social service was necessary to bridge the divide between the rich and the poor. “Empathy and sympathy are leaving our society,” she said. “We need to educate our children to care for others.”

An official of the resource generation and outreach department at the Sindh Institute of Urology and Transplantation (SIUT) said that their student volunteer programme has been very successful. “Around 3,000 students from over 100 schools have participated in community service so far,” she said.

The SIUT holds the programme every year during the vacations. It includes nursing training for the students and teaches them how to take care of the patients. The official said that a lot of students spent time in the pediatric ward reading story books to the children. She mentioned the names of the schools which were most regular: The Lyceum School, Mama Parsi and  Foundation Public School were among them. “Sometimes the teachers also come with the students and do community service.”

An education expert, Abbas Husain, thought that since the educated youth is in school, educational institutes should encourage their students. He agreed that community service was not only limited to hospital visits and old homes. “The students should be encouraged to help people,” he said. “For example, they can pay utility bills for senior citizens or people who cannot do it themselves or they can help those who are illiterate fill out a form.”