The civil-milita­ry faultl­ine has been compou­nded by the additi­on of two new power-broker­s – the courts and the media.
By Raza Rumi
Published: January 12, 2012
Tweet Email 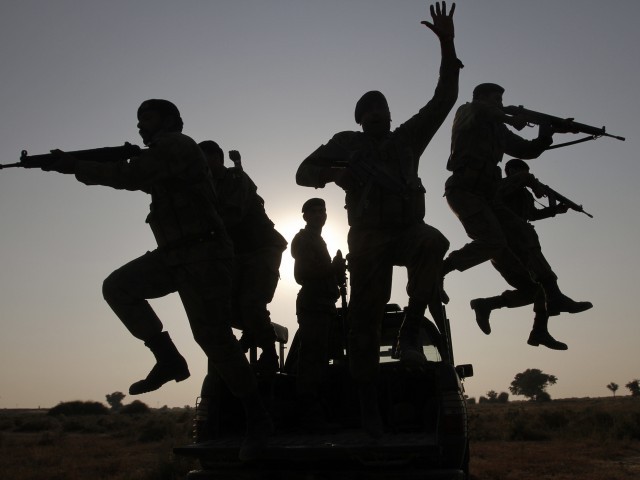 Pakistan has perhaps moved on from 1990s when military takeovers were easier. PHOTO: REUTERS/ FILE

If there is one phrase that would summarise the events of Wednesday it would be ‘media frenzy’ caused by the new players in Pakistani politics: The ubiquitous news channels, hyper-imaginative TV anchors and the social media. By early evening, rumours of an impending coup had gripped Pakistani imagination; and many people were led to believe that the end of the government was nigh. The source of this storm was an ISPR press release that expressed military’s objection to the contents of Prime Minister Gilani’s interview with a Chinese news agency. The PM had implied that the army and intelligence chiefs had acted unconstitutionally in the memo affair by submitting affidavits directly to the Court. “There can be no allegation more serious than what the honorable prime minister has leveled,” stated the ISPR with reference to Gilani’s remarks. Further, the ISPR announced that this “has very serious ramifications with potentially grievous consequences for the country.”

Shortly thereafter the PM dismissed the Defence Secretary, reportedly close to military leadership, for “gross misconduct and illegal action”. The Secretary apparently had bypassed government channels. Most media discussions based on a wild guessing game suggested that the PM might dismiss the ISI and military chiefs. Concurrently, the posting of a new head for the infamous 111 brigade – the coup instrument – by the military was interpreted as a signal that military establishment would react in case of such an eventuality. Thus the stand off between Islamabad and Rawalpindi was detectable. Sections of local media fuelled the tensions and by the evening most international news sources were ‘breaking’ stories on the heightened civil-military rift in Pakistan. Even the diplomatic missions issued statements making the usual noises about supporting Pakistan’s democracy yet vowing not to interfere in its internal affairs.

The widening rift between Zardari led coalition and the Army is not new. It has intensified with the hearing of a petition filed against the memo (asking for US help to prevent a coup) allegedly authored by Pakistan’s former Ambassador to the US. The recent verdicts of the Supreme Court on forming a judicial commission to probe the memo affair and more importantly the 6-options laid out for the government to implement its 2010 NRO judgment have made the government jittery.

By the late evening, tensions were somewhat defused as PPP’s senior Ministers assured that Gen Kayani would complete his tenure; and the PM talking to media remarked that Kayani had spoken to him before the ISPR press release was issued! Such convenient shifts in positions would seem surreal in any other country but Pakistan’s governance patterns are neither rule based nor predictable.

Observers have noted that President Zardari and the government have been playing a game of chess with the Court. That may now be coming to a closure as the hearing on January 16 will be critical given that one of the options is to initiate judicial proceedingss with implied disqualification of senior officials for not complying with court orders. It seems that the government with regard to the military has adopted a similar strategy.

Also on Wednesday, the Chief Justice reiterated his support for democratic system while talking to a delegation. The Judiciary, media and international opinion are aligned against a coup and the government knows it. After dismissing the Defence Secretary it backtracked from the brink. PM Gilani has done it before as well. After his strong remarks against the military in late December he retreated. Both sides have shown the cards they have: the military has the traditional authority, which it has enjoyed since 1950s; and the civilian government is ready to be ‘martyred’. The judicature has emerged as an arbiter of sorts.

The government would need to make concessions before the Court for its survival. Wednesday’s events suggest that Pakistan has perhaps moved on from 1990s when military takeovers were easier. At the same time, the civil-military faultline has been compounded by the addition of two new power-brokers – the courts and the media.  Politicians and the khakis are becoming cognizant of this new reality.