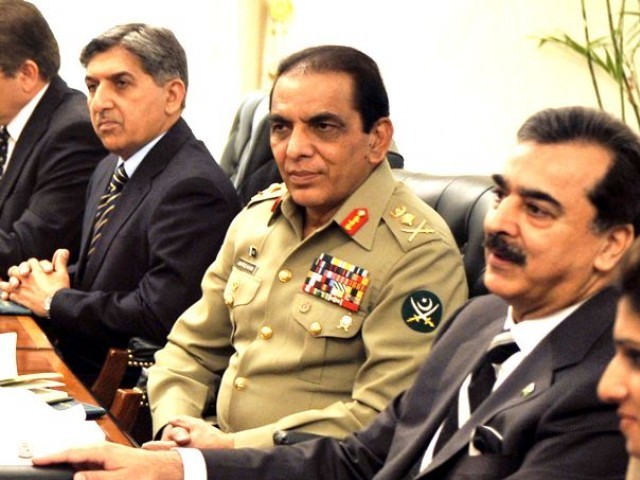 This imbalance in power needs to be rectified immediately in the greater national and public interest since all state institutions need to be subservient to parliament. PHOTO: AFP

In her capacity as the lawyer of former ambassador to the US Husain Haqqani, Asma Jahangir appears to be employing a public defence in the memogate case that has the virtue of being true: that her client, as a member of the civilian government, is being held to a higher standard than the military. On December 19, she said that ISI chief Shuja Pasha should have resigned after the May 2 Abbottabad raid, much as Haqqani did soon after the US confirmed the existence of Mansoor Ijaz’s infamous memo. This line of attack may not be enough to spare Haqqani should his role in the controversy ultimately be confirmed, but by bringing the matter to public attention, Jahangir is fighting the worthy cause of civilian supremacy.

If indeed it turns out that everything Mansoor Ijaz has said is true, then, along with Haqqani, Pasha, too, should be forced out of his job. According to Ijaz, Haqqani only began plotting against the military after the military first considered removing the government from power. In Ijaz’s leaked BBM exchanges, allegedly with Haqqani, he says that the ISI chief had sought permission from Arab leaders to force President Asif Zardari from office in the days after the May 2 raid. In theory at least, the military is supposed to be subservient to the elected government and so to seek foreign help to bring down that government is a gross violation of the Constitution. While hearing the case against Haqqani, the Supreme Court may want to expand its remit and look into these far more serious allegations too.

But as history has painfully taught us, the military does not tolerate outside accountability. For the government to have even a chance of fighting back, it needs the support of both the Supreme Court and the opposition parties. This is where the changing rhetoric of PML-N chief Nawaz Sharif has been such a disappointment. He has used the memogate controversy to fan the flames of public anger against Haqqani in particular and the government in general. What makes this even more disappointing is that Nawaz had been one of the more clear-eyed critics of the military. After May 2, he was one of the few politicians courageous enough to call for accountability for those in uniform. And indeed, as recently as December 19, Nawaz met with veteran Baloch nationalist leader Ataullah Mengal and agreed with Mengal’s accusations at a press conference, where he blamed the military for killing and suppressing the Baloch. It is noteworthy how the problems in Balochistan are being pinned almost entirely on the shoulders of the army, with nary a word against the civilian set-up. This is because the Baloch know, as does the rest of the country, that, elections aside, true power rests with the generals.

The Supreme Court, which has dogged the government as it does every time, seems less worried about the power of the military. Even though it has publicly disavowed the doctrine of necessity, which has been used to justify every coup in the country, the court has not pursued the military with the same verve it has shown in holding the government accountable. The same is true of the Abbottabad commission, which in its questioning of Haqqani and ambassador to the UK, Wajid Shamsul Hasan, seems likely to pin much of the blame for that fiasco on the government. General Kayani was fully on board when the NRO was first agreed upon by Musharraf and Benazir; it would now be ironic if that is what leads to further ruptures in civil-military relations.

It is also important not to get caught up in the minutiae of everyday politics to such an extent that we lose sight of the bigger picture. The military always escapes accountability but brings down all its force on civilians who have displeased it. This imbalance in power needs to be rectified immediately in the greater national and public interest since all state institutions need to be subservient to parliament and the executive led by an elected prime minister.