No respite for the ‘bloody civilian’

No respite for the ‘bloody civilian’ 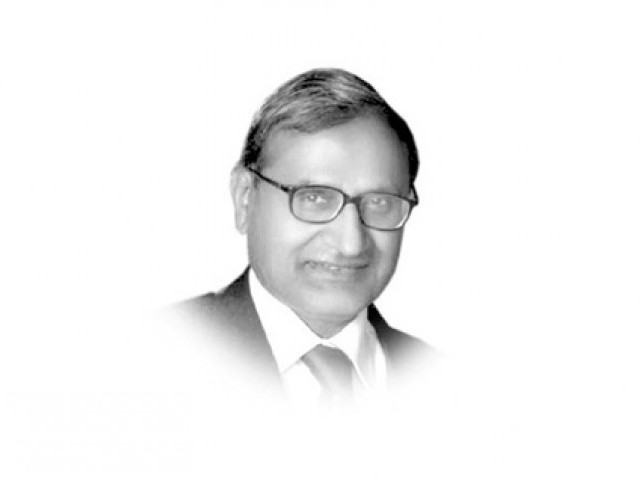 The writer, a former chief economist of the Planning Commission, is at present based at Cambridge pervez.tahir@tribune.com.pk

The government stands completely condemned: corrupt, inept and working against the national interest. First, the MFN treatment for the enemy and now a plot against our strategic assets and their protectors — need there be more evidence against the ‘bloody civilians’? The main opposition party agrees with the script.

In case the main opposition, not fully trusted due its maverick leader, deviates from the script, a party of the untainted has been given its blessings. A meeting of this party’s supremo with the chief spymaster has been denied, but another with the nemesis of our now-former man in Washington has been confirmed. No public servant can visit a foreign country without the approval of the country’s chief executive. The chief spymaster, who is answerable to the chief executive, visits a third country without his knowledge, meets an acknowledged Pakistan-hater to patiently listen to the accusations made against another public servant, conducts an investigation without — one would presume — even informing the accused and satisfies his senior brother-in-arms that the accused stands guilty. Both then summon a meeting with the chief executive and the head of state and present them with a fait accompli. A public servant is investigated first by the ministry concerned. The Foreign Office, however, remains as far removed from this case as it is from foreign policy.

Fast rewind to some months ago. A senior leader of the party, weary of an intrusive establishment, found, as chair of the Public Accounts Committee (PAC) that three retired generals were involved in mismanaging the finances of the National Logistics Cell (NLC). The PAC is fully authorised to investigate offending public officials and recommend disciplinary action. In this case, the PAC was not taken seriously in the first place. When it was about to finalise its recommendations in March this year, the army high command intervened to take matters into its own hands as senior army officials were involved.

On June 13 of this year, the PAC expressed frustration over the slow pace of the military investigation and said that if the military did not submit a response soon, the PAC would have no choice but to take a unilateral decision without any military input. The PAC is required to submit a complete review of government accounts by the end of the fiscal year ending June 30.

“In March, Kayani shared certain findings of the [military’s] inquiry which are very much in line with our findings,” said Chaudhry Nisar. He said the military brass had been acting “hyper-sensitive” in recent days and he urged them to get over their sensitivity and take action against corrupt individuals to save the institution.

No action was taken till July, when the PAC was informed by the defence ministry that it would constitute a court of inquiry for this case.

“It is a proud moment for the Public Accounts Committee that on its recommendation the defence ministry, for the first time in the country’s history, has agreed to set up a full court of inquiry against three former military generals,” PAC Chairman Chaudhry Nisar Ali Khan said.

The defence ministry formed its court of inquiry only last month. On the basis of three inquiry reports, the PAC had already found serious violation of rules, the prime minister’s directives and discipline. But the generals, being generals, will be investigated by their own. There is no such luck for the bloody civilian.

Therefore, the PAC postponed a decision on penalties in anticipation of receiving the military’s internal inquiry report. Senior defence ministry official Air Vice-Marshal Najum told the committee that the military had completed its inquiry and was reviewing it.

The past many months have seen considerable wrangling between the committee and the military high command. The military had initially asked for a month to deal with the issue. It has now been more than seven months since the army intervened in the matter.