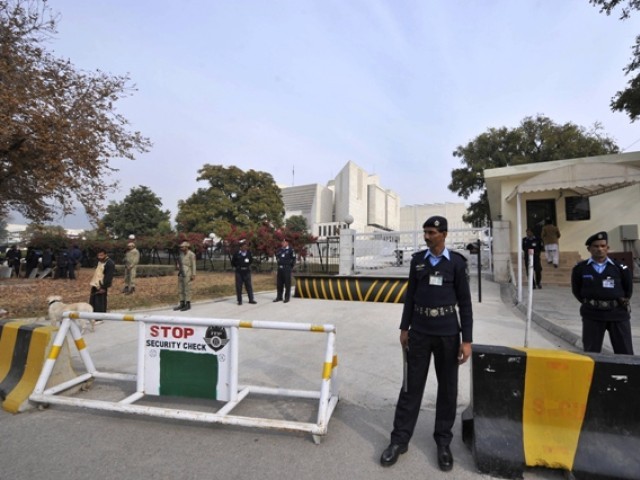 Security personnel deploy outside the Supreme Court building during a hearing of memogate scandal in Islamabad on December 19, 2011. PHOTO: AFP

ISLAMABAD: The Supreme Court has asked Attorney General (AG) Maulvi Anwarul Haq to state whether former Law Minister Babar Awan had been representing the federal government when he made potential derogatory remarks against the judiciary.

Heading a nine-member bench during the hearing of the Memogate case on Monday, Chief Justice (CJ) Iftikhar Muhammad Chaudhry observed that Prime Minister Yousaf Raza Gilani should have taken notice of the December 1 press conference held by Awan in which he lashed out against the judiciary.

During a press conference on December 1, Awan had said that by ordering the judicial probe, the Supreme Court had denied a bipartisan and bicameral parliamentary committee on national security its right to hold an inquiry into the scandal, which has been seen as the latest rift between the country’s political and military leadership.

Justice Jawad S Khwaja observed that the judiciary was an independent organ of the state and was answerable to the people not the parliament.

When the chief justice asked the attorney general to move a contempt case to bring to book the people involved in the press conference, he said that he was restricted by the rules of business on his role in contempt proceedings.

The court asked him to arrange for the recording of the press conference to be played inside the courtroom so everyone could see what was said of the judiciary. The CJ also criticised former ambassador to US Husain Haqqani’s counsel Asma Jehangir by saying that lawyers such as Jehangir watched the judiciary’s criticism in silence.

Jehangir, in reply, told the court: “I haven’t been watching television for the last seven days; still I condemn such an attitude.”

When Advocate Rashid A Rizvi took the rostrum to represent Pakistan Muslim League – Nawaz (PML-N) chief Nawaz Sharif, the chief justice asked him to argue on the maintainability of the petitions filed under Article 184(3) of the Constitution. The CJ observed the court in its December 1 order had raised the question of maintainability.

The chief justice said that Awan had brought bad reputation to the family of Tariq Khosa, whom the court had named for heading the commission, by saying that he was appointed because he was the brother of Supreme Court judge Asif Saeed Khosa. Tariq Khosa had refused to head the commission after Awan’s conference.

The Supreme Court also asked the attorney general to place on record a copy of Haqqani’s resignation along with a copy of the notification of former SC judge Justice Javed Iqbal’s appointment to head the Abbottabad commission.

The CJ adjourned the case till Thursday and decided to put off the case at the request of Jehangir.