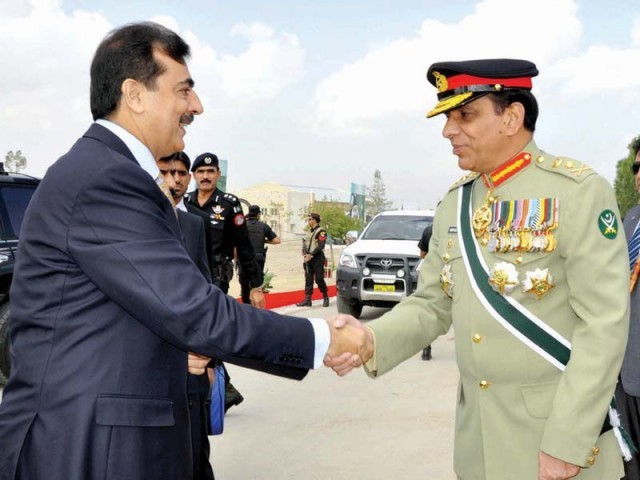 ISLAMABAD: Amidst a rapidly-shifting and charged political scenario, the prime minister and the army chief held a meeting.

It was one-on-one, closed-door and over three hours long.

Little is known about what was discussed, except an official statement – but the language of the statement is telling. Prime Minister Syed Yousaf Raza Gilani appeared to be backtracking from the assertions he, himself, and his party men have been making over the past few days on the Memogate controversy.

The official statement issued by the media office of the prime minister termed murmurs of a civilian-military stand-off mere ‘rumors’.

“Taking serious note of the rumors regarding a confrontation over the Memo issue, the prime minister strongly rejected the notion,” the statement said.

As the Memogate controversy unfolded, the rhetoric of the PPP and some of its allies has been vehemently accusatory – alleging that a fledgling democratic phase was being conspired against.

A few hours before this meeting, Gilani, while jointly chairing a meeting of PPP parliamentary party along with Bilawal Bhutto Zardari, told party members that the memo issue was created by ‘certain forces’ to pack up the democratically-elected government.

According to insiders he had also castigated the armed forces for approaching the Supreme Court directly with its replies in the memo case instead of coming through the ministry of defence.

“They (army and ISI) should have adopted the proper channel in filing their replies,” sources quoted PM as saying during the meeting.

But the statement following the Kayani-Gilani meeting had the contrary to say.

“The prime minister and the army chief also agreed that replies forwarded by the COAS and DG ISI were in response to the notice of the Honourable Court, through proper channel and in accordance with the rules of business and should not be misconstrued as a standoff between the Army and the government,” read the brief statement issued after the meeting.

“The prime minister reiterated that the Government of Pakistan and its institutions remained committed to their constitutional roles and obligations to a democratic and prosperous future for Pakistan,” it added.

Addressing a Senate session few days ago, Gilani is on the record expressing fears that a confrontation over the memo issue could be devastating for the entire system.

According to his spokesman, the prime minister told the army chief that the government’s stance regarding the jurisdiction of the court on the memo issue was still to be heard by the court.

The federal government was not the only one backtracking.

Mansoor Ijaz, the Pakistani-American businessman at the centre of the memogate scandal, has backtracked on his text message about ISI chief Lt Gen Ahmad Shuja Pasha’s tour of some Arab states allegedly to muster support for a possible military coup.

A blog published in The Independent referred to a text message in which Ijaz reportedly said that a senior US official had informed him that Gen Pasha had approached senior Arab leaders in a bid to gather support for deposing President Zardari.

“I was just informed by senior US intel that GD-SII Mr P asked for, and received permission from senior Arab leaders a few days ago to sack Z. For what its worth,” read Ijaz’s message.

It is clearly written in the message that permission was asked for and given.

However Ijaz speaking on television on Friday said the following: “no one ever said to me that General Pasha received permission from somebody to conduct a coup, that’s not what they said.”

Ijaz goes on to say: “What they said was that he had toured Arab countries right after the bin Laden raid taken place, and that he had in fact made clear to those Arab leaders that he met with that there were a significant degree of stress, if you will, between the civilian sector and the establishment about laying blame on what. Again, these are intelligence sources talking to me; I don’t have a transcript that says that; I don’t have the notes of a meeting in which any of those things were said.”