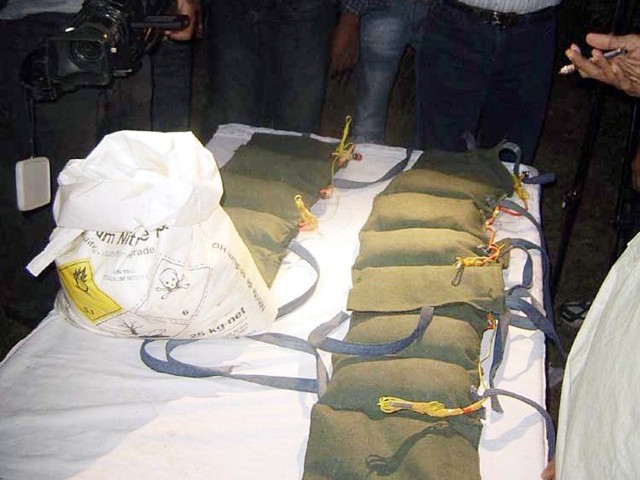 LAHORE: A suspected terrorist was detained by an intelligence agency on December 8, foiling a large-scale terror bid planned for Lahore during Muharram, sources said.

Sources told The Express Tribune that the militant’s phone call was intercepted and he was later held from Raiwind Road. A suicide vest and at least 16 kilogrammes of explosives were also recovered from him.

A report was forwarded by the provincial Home Department’s International Security Wing to the Inspector General of Punjab Police, Capital City Police Officer (CCPO) and other concerned officials to put security on alert to foil terrorist attacks on the ninth and tenth processions – particularly in the areas of Tokhar Niaz Baig on Raiwind Road, Dharmpura and Mustafabad.

Intelligence and law enforcement agencies had kept the areas under surveillance after they were alerted.

The militant had received a phone call from Waziristan on the eight of Muharram and also hailed from the tribal area, sources said. Intelligence sources revealed that the terrorist had reached Lahore before the start of Muharram, while the suicide vest and explosives were delivered to him by another terrorist of the same network.

The terrorist outfit had planned to target three big Shia processions in Lahore through multiple suicide and bomb attacks.

The intelligence and law enforcement agencies have tried to detain other members of the network and further arrests are expected soon, sources claimed.

The agency have kept the detained man’s identity secret to ensure the arrest of the remaining terrorists of the network. The terrorist has been shifted to an undisclosed location for further interrogation.

Due to the sensitivity of the matter, agencies have not informed Bomb Disposal Squad (BDS) about the incident and have also not sent explosive materials for analysis.

BDS Commander Muhammad Aslam confirmed this while talking to The Express Tribune.

Aslam added that when a case is registered, the BDS will be informed and the explosive material will also be handed to the department.