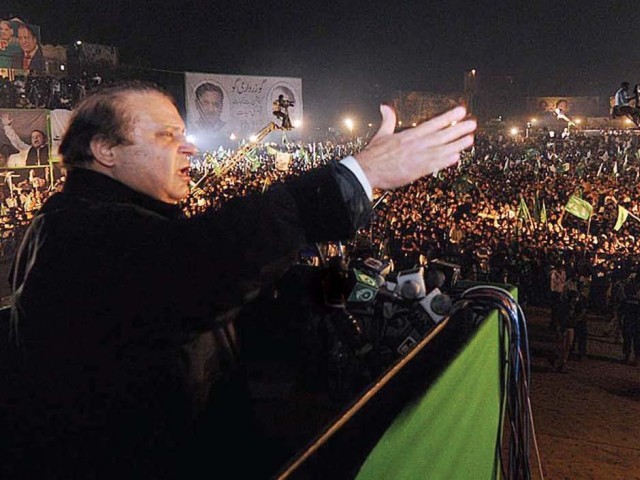 FAISALABAD: The forlorn opposition appears to have finally found the government’s choking point.

Addressing over 20,000 at a rally in the Dhobi Ghat Ground of Faisalabad on Sunday, PML-N leader Mian Nawaz Sharif demanded that an independent inquiry commission be formed “within a day or two” to investigate claims that the government sought US support to take action against its own military and intelligence services.

Failing this, the party will converge “from all provinces” in Islamabad where a petition would be filed with the Supreme Court, Sharif warned.

He said he would not stand by idle when “the country’s sovereignty is being sold and self respect compromised.”

One clear message that emerged from the otherwise chaotic rally was that the party would focus on memogate to bring the government to its knees.

In a speech that ended in couplets from Punjabi poetry, Sharif also warned those who played games on behalf of intelligence agencies and said he would put an end to this.

Nawaz Sharif had much ground to cover at the rally, seen to be held in response to the Pakistan Tehreek-e-Insaf rally in Lahore earlier this month. He said that Imran Khan had misled the people on the issue of declaring assets. “We have declared our assets,” he said, adding with a flourish: “I have devoted everything to the people of Pakistan.”

It was left to the leader of the Opposition in the National Assembly Chaudhry Nisar to hit out at Imran Khan. Nisar alleged that Imran “was backed by intelligence agencies.”  The PML-N senior also had some advice: “Only one rally cannot decide public support.”

Punjab Law Minister Rana Sanaullah said that by turning up in large numbers at the rally, the people had shown that they rejected the “corrupt Zardari mafia”.

He also described Imran Khan as a pawn of the establishment, and said Mian Azhar, who recently joined Khan’s party, was known for his ties with intelligence agencies.

The burly Pir Sabir Shah, senior PML-N leader from Khyber-Pakhtunkhwa, in his speech said that his party’s fight would be against Zardari and “other corrupt elements.” He said that Imran Khan had sought support from the “Jewish lobby”.

Disputes over numbers began even before the rally. The PML-N said it had put 30,000 chairs at the venue, while opposition leader Raja Riaz said the ground did not hold more that 13,000 seats. PTI divisional coordinator Tariq Chaudhry added that the PML-N would try to fill the gaps with 5,000 plainclothes policemen. He accused the party of using state machinery to beef up the gathering.

The PPP has seven, the PML-N four and PML-Q eight of the 20 National Assembly seats from Faisalabad division.

Minister for Information and Broadcasting Dr Firdous Ashiq Awan in reply to the Sharif statement on Sunday evening said that no unconstitutional step can destabilize the democratically elected government.