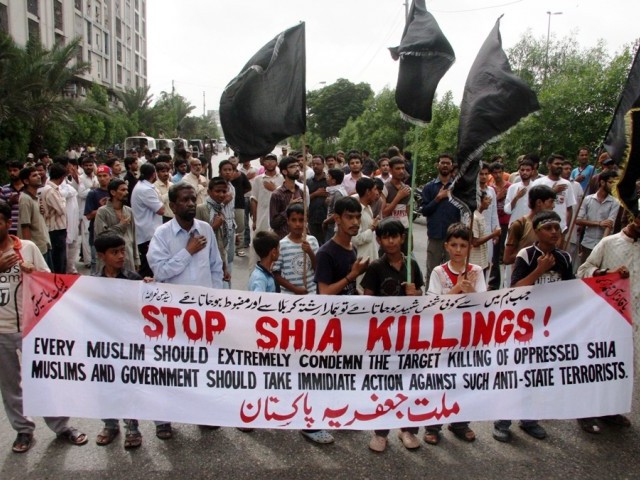 QUETTA: Fourteen people belonging to the Shia community were killed while seven injured in a firing incident near the Western Bypass in Quetta on Tuesday morning.

About 20 people were on board a bus when unidentified gunmen appeared on a motorcycle and opened fire at the vehicle enroute to Hazara Ganji.

Conflicting media reports stated that the passengers were lined up and subsequently shot by the assailants.

Express 24/7 correspondent Mohammad Kazim reported that the passengers were on their way to the fruit and vegetable market when the assailants opened fire.

“The bus was carrying people mostly from the Hazara community who were returning from Quetta,” senior police Hamid Shakeel told Reuters.

“The death toll has risen to 14. Two of the injured who were in critical condition died in hospital. Now 13 Shiite Muslims and one Pashtun have been killed in the attack,” he said after initially putting the death toll at 10.

Meanwhile, police have cordoned off the area and initial investigations of the incident is underway.

Sectarian violence is on the rise in Quetta as 26 Shia pilgrims were killed in a firing incident last month in Mastung, about 30 kilometres southeast of Quetta, when a group of armed men attacked a passenger bus carrying Shia pilgrims from Quetta to Iran.

The Mastung attack was claimed by banned militant outfit Laskar-e-Jhangvi.

Up to 400 furious Hazaras demonstrated outside the Bolan Medical Complex where the wounded were taken for treatment, condemning the government for inaction over sectarian groups, said police official Wahid Bakhsh.

Angry protesters also reportedly set ablaze the bus that was attacked by the assailants.

“These are not random killings but demonstrate the deliberate targeting of the Shia by armed groups,” said Amnesty’s Asia-Pacific director Sam Zarifi.

“These attacks prove that without an urgent and comprehensive government response, no place is safe for the Shia,” Zarifi added.

(Read: How not to cede space to extremists)

The rights group said it had recorded details of at least 15 attacks specifically targeting Shiites across Pakistan.

“Continued failure to address sectarian violence will only exacerbate the general breakdown in law and order in Pakistan,” it said.

Pakistan’s own independent rights watchdog said the killers had been emboldened by a persistent lack of action against sectarian militant groups, which have been implicated in thousands of deaths in past years.

Tuesday’s attack “exposes once again the diminishing writ of the state”, warned the Human Rights Commission of Pakistan (HRCP).

Balochistan is also rife with militancy and a regional insurgency waged by separatists who rose up in 2004 demanding political autonomy and a greater share of profits from the region’s wealth of natural resources.

Updated from Print edition (below):

Sectarian killings: Hazaras wake up to another day of horror

In another ill-fated day for the increasingly vulnerable Hazara community, a local bus was attacked early Tuesday morning leaving 14 dead.

Of those killed in the attack, which occurred on a highway in Akhtarabad near Western Bypass of Quetta, only one person was not from the Hazara community.

Capital City Police Officer Ehsan Mehboob said the bus was carrying more than 20 people and was on its way from Kirani to Hazar Ganji, on the outskirts of Quetta. People from the Shia community often travel on this route to purchase vegetables and fruit for their shops in Quetta.

The bus was intercepted by a pickup that swerved in front of it and blocked its path. Assailants opened fire after distinguishing the Hazaras, said Deputy IGP Hamid Shakil.

The security vacuum in Balochistan has caused so much fear that ambulances did not reach the site for fear of another attack. The driver of the bus had to take the bodies and the injured to the hospital himself. “No one had the courage to shift the victims to the hospital,” the driver told reporters at the hospital.

The bodies and injured were taken to Bolan Medical Complex. The injured were then sent to Combined Military Hospital because of inadequate security and a lack of facilities.

Inspector General Balochistan police suspended the SHO of the Shalkot police station, in whose jurisdiction the attack occurred, while 10 suspects were detained.

The incident sparked protests in different parts of the provincial capital.