He was laid to rest in the Paposh Nagar gravey­ard right next to his brothe­r Ghulam Farid Sabri on Saturd­ay.
By Sohail Khattak
Published: September 25, 2011
Tweet Email 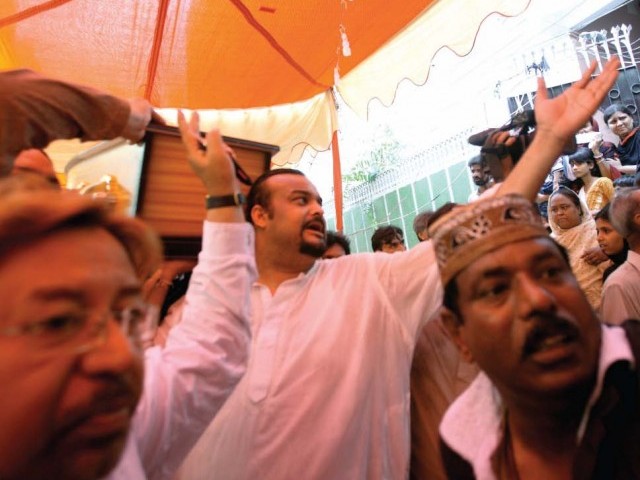 Famous qawwal Amjad Sabri gestures as he shoulders the coffin of his uncle Haji Maqbool Sabri during the funeral procession in Liaquatabad on Saturday. Maqbool Sabri passed away in South Africa on Wednesday. PHOTO COURTESY ASIM HAFEEZ

Sufi poetry and qawwali lovers strained to catch one last glimpse of renowned qawwal, lead vocalist and harmonium player of the Sabri brothers, Maqbool Ahmed Sabri, at his funeral on Saturday.

He was laid to rest in the Paposh Nagar graveyard right next to his brother Ghulam Farid Sabri on Saturday. The funeral prayers were offered by the Jamaat-e-Ahle Sunnat vice chairman Maulana Humza Ali Qadri at Forqania Masjid in Liaquatabad.

Maqbool Sabri’s nephew Amjad Farid Sabri told The Express Tribune that the death of his uncle was the death of the Sabri brothers and the future of qawwali in Pakistan. “My father and uncle lived in this world together, they have been buried in the same place and will be in heaven together too,” he said. “No one can reach the peak that they did in qawwali as people like them are born once in a lifetime,” he said. “I have always tried to follow them and hope to take their work forward.” Amjad added that he had always tried to take their work a step further and expected Maqbool Sabri’s son Shomail to step into the field soon.

“God had given him a gift, he had such a melodious voice that there is no one like him,” said Hasaan Ahmed Siddiqi, a student of Maqbool Sabri. He told The Express Tribune that he started studying music and singing with the qawwal six years ago and had learnt 150 raags from him.

Amanat Ali, a singer, remarked sadly that Maqbool Sabri’s death was a huge loss to the field of qawwali. Maqbool Ahmed Sabri passed away at a hospital in Cape Town, South Africa on Wednesday. His body was brought to Karachi on Saturday morning and his funeral prayers were offered after Zohr. His soyem will be held at Forqania Masjid, Liaquatabad on September 26 after Asr.