Ace fashion designer Maheen Khan has announced that she will be returning her Lux Style Awards following the recent controversy. The 21st edition of the LSAs was recently held in Lahore, with a handful of celebrities showing up for the once-famous event.

Feroze Khan's nomination and subsequent win caused an outrage on social media where many called out the organisers for 'enabling' an alleged abuser whilst making a mockery of domestic violence. Many voiced disapproval of Feroze's inclusion this year while others stood in solidarity with the victims.

Maheen took to social media and shared that she will 'no longer associate herself with an event that disregards the plight of abused women.'

"In a world where one in three women worldwide experience physical or sexual assault, where rape and domestic abuse remains unaddressed, it is imperative that those who have a voice must use it," the designer wrote on an Instagram post. "Physical abuse against women and girls is a human rights violation. Today it is someone's daughter, tomorrow it might be yours."

She went on to comment, "While so many of us have raised our voices against the deaths of Zainab, Noor and others,
the disregard and insensitivity of a recent award show is a travesty. In all conscience, I can no longer associate myself with an event that disregards their plight."

Maheen further revealed that she will be returning my Lux Style Awards "in solidarity with those who continue to suffer the infringement of their basic human right to live free from violence." She further lamented, "It is a sad day as I had such hopes for the Lux style Award show to be not just a champion of style but a platform that nurtured justice for women and stood out as a proud beacon of hope for every child and woman who has been violated."

Earlier, Oscar-winning filmmaker Sharmeen Obaid-Chinoy announced that she would be returning her Lux Lifetime Achievement Award, which she received from the platform back in 2012, in protest.

Taking to her Instagram Stories on same day, the Saving Face director pointed out, “Lux is a beauty brand that sells soaps to women yet it has chosen to allow the nomination of a man known to have violently abused his ex-wife. Its parent company, Unilever, has a global campaign that says no to domestic violence and advocates against it. The company signed up to the United Nation’s SDGs, including SDG 5 on gender equality,” she wrote, noting that Unilever’s offices in Pakistan do not seem to share the same values.” 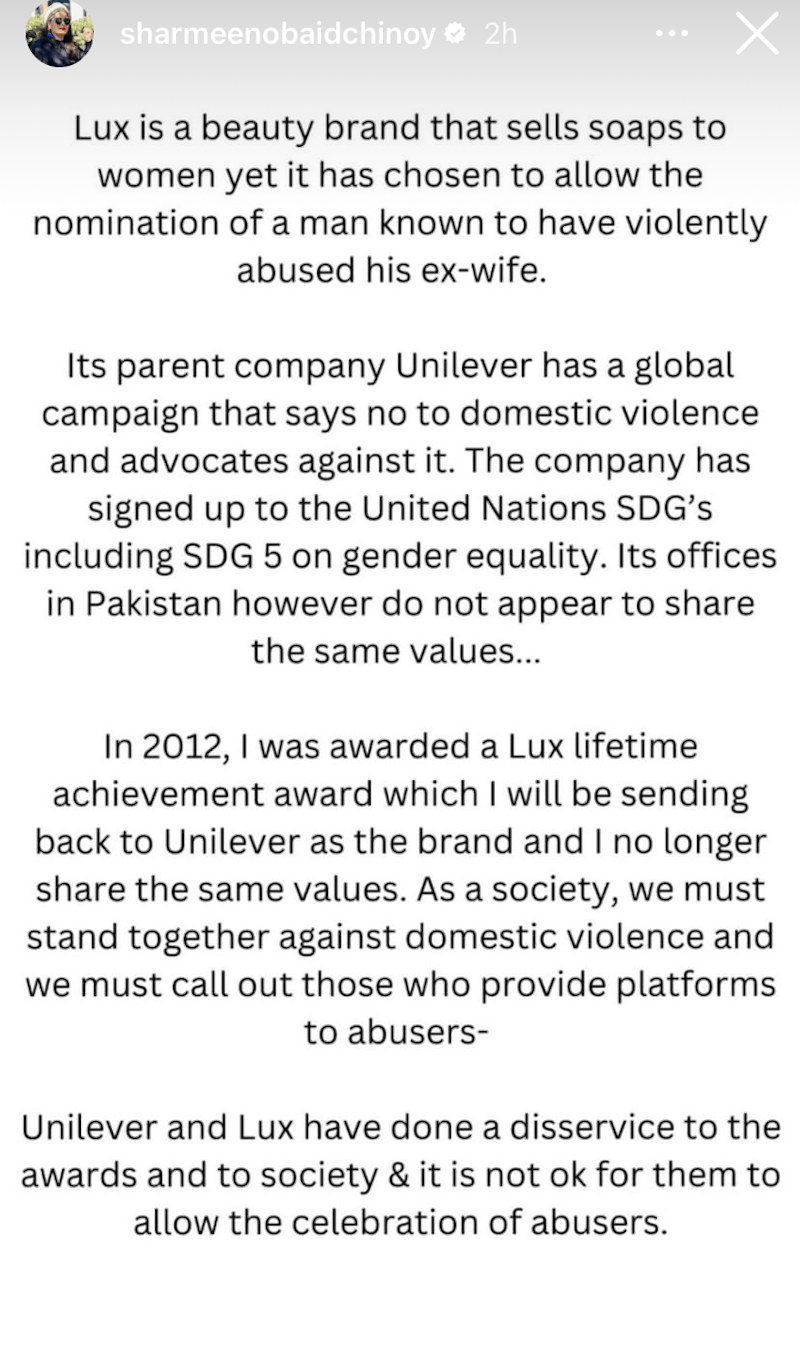 She then reminded everyone that in 2012, she was awarded a Lux Lifetime Achievement Award. “I will be sending [that] back to Unilever as the brand and I no longer share the same values,” she declared. “As a society, we must stand together against domestic violence and we must call out those who provide platforms to abusers,” added the filmmaker.

“Unilever and Lux have done a disservice to the awards and to society and it is not ok for them to allow the celebration of abusers,” she concluded.

Feroze, who recently came under fire for alleged abuse against his ex-wife, Aliza Sultan, who offered proof of domestic violence on the internet, had been nominated and ended up winning the silver trophy in the Best TV Actor – Viewers’ Choice category for his drama Khuda Aur Mohabbat.

Later, the brand put out an explanation for its nominations. A post shared on the LSA Instagram handle on Wednesday stated, “The Lux Style Awards submissions are received from artists and channels as part of an open call for entries for consideration in the awards. All shortlisted nominations, for the Viewer’s Choice Category of the LSA 2022 are a result of exclusive viewer voting without any intervention by the Awards.”