Chief of Army Staff (COAS) General Qamar Javed Bajwa has said that the primary reason for armed forces to exist today should not be to prosecute wars, but to ensure that they do not take place.

“Mankind’s destiny, more than ever before, hinges on our collective capacity to come together and take the route of peace and cooperation instead of conflict, communication instead of clash and multilateralism instead of self-preservation,” Gen Qamar said while addressing the passing-out parade of 213 Regular Commissioning Course known as Sovereign’s Parade held at Royal Military Academy Sandhurst, UK as the chief guest on Friday.

According to the Inter-Services Public Relations (ISPR), the COAS became the first-ever Pakistani dignitary to be invited as a chief guest at the Royal Military Academy Sandhurst.

The general was joined by cadets from 27 different countries, including the UK. Among the 41 international cadets were Cadet Muhammad Abdullah Babar and Cadet Mujtaba from the Pakistan Military Academy.

Addressing the passing-out parade, Gen Qamar emphasised on world peace as the need of the hour, saying it was crucial “to preserve the vitality, relevance and internal sense of impartiality in multilateral institutions, maintain consensus on the collective defence of global commons and uphold the prestige of international law”.

As a direct consequence of the onset of fourth industrial revolution, the COAS said, dual-use technologies and niche capabilities led by artificial intelligence were fundamentally altering the character of future war.

On recent technological and scientific advances, Gen Qamar said, “The battlefield of tomorrow would be characterised by extreme precision, lethality and transparency which would be particularly challenging for military leaders, especially young officers in the battle, both mentally and physically.”

However, he said, “This future is inevitable, and each one of you would have to adapt to new realities in the technological domain to ensure successful outcome in the battle.”

The army chief congratulated the cadets and their families for graduating from the prestigious institute, making special mention of the two Pakistani cadets among the graduates.

The general expressed his gratitude for having been granted the “unique honour and a great privilege” to speak at the Sovereign's Day Parade at Sandhurst, and considered it proof of “the deep-rooted relationship that exists between Pakistan and the United Kingdom, based on mutual respect and shared values which have been carefully nurtured by both nations over many decades”.

The COAS welcomed the young cadets as they joined “the most distinguished and the noblest of professions”, but also used the platform as an opportunity to remind them of the “great expectations associated” with their alma-mater and their respective nations.

"The journey that awaits you is challenging as well as exciting," said Gen Qamar, as he reminded the graduates that they needed to acquire the “lofty attributes of leadership, with clear sense of purpose, to gain respect and trust of [their] subordinates”.

"As a leader today, you need to have courage and ability to take difficult decisions and then accept full responsibility,” he added.

The army chief arrived in the UK on an official visit on Thursday.

The military’s media wing said besides attending the passing out parade at Sandhurst, the army chief will be calling on the military leadership of the UK during the visit. 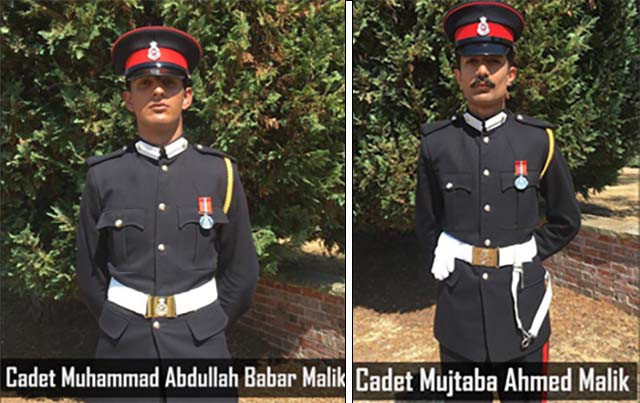 Firepower, cyber have emerged as mainstay of future war: COAS