How Nato and G-7 are polarising the world

According to the data, Balochistan records an average of 6.9 mm of maximum rainfall from July 1 to 9. PHOTO: EXPRESS
ISLAMABAD:

Rains in Balochistan and Sindh have exceeded the 30-year record in July this year and the month is not even over yet.

Federal Minister for Climate Change Senator Sherry Rehman shared a graph of the Pakistan Meteorological Department (PMD) in a tweet.

The first column of the graph describes the maximum rainfall in different places from July 1 to 9. The other one shows the rainfall in 2022 during the same period in millimeters.

According to the graph, Balochistan records an average of 6.9 mm of maximum rainfall from July 1 to 9. 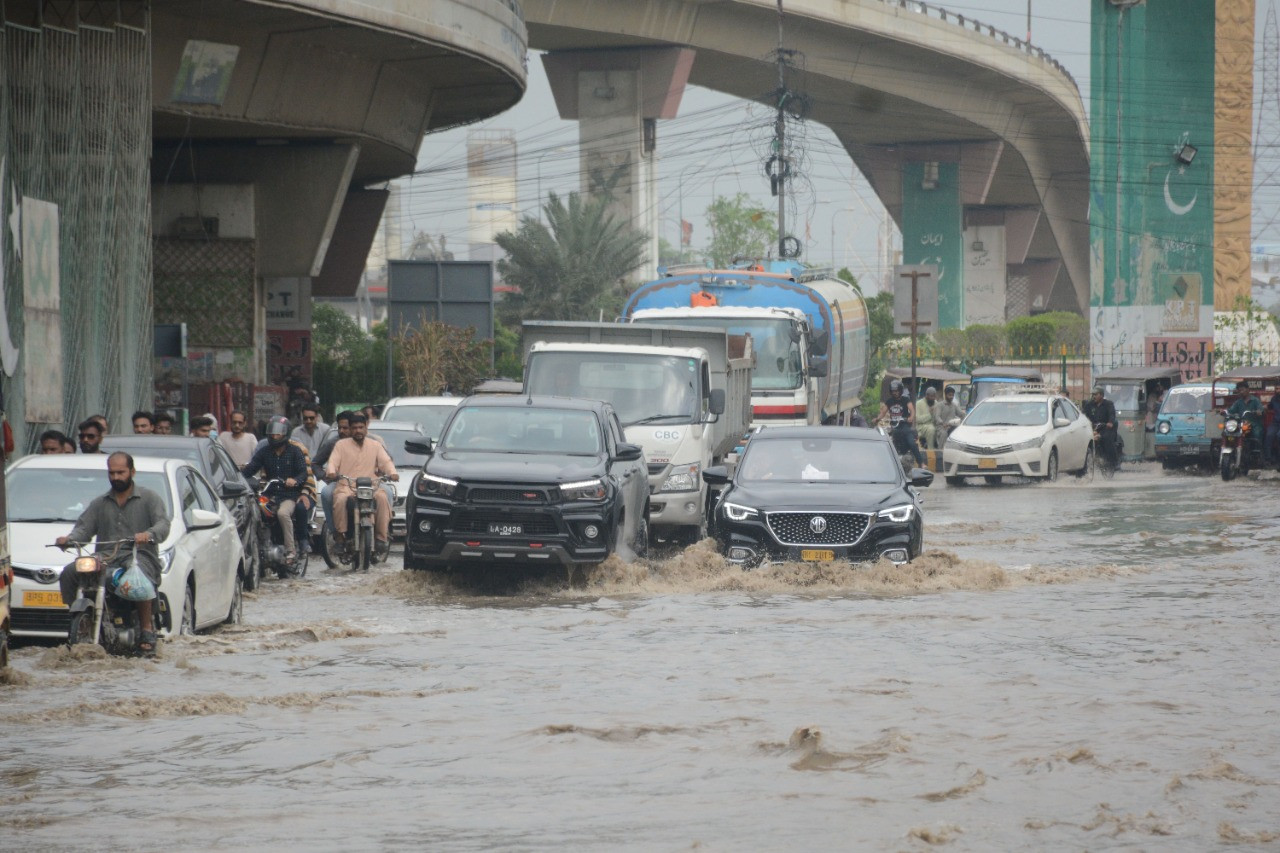 However, in the same period this year, Balochistan received around 45.9 mm of rainfall -- 39 mm more than usual.

Similarly, Sindh receives an average of 10.5 mm of maximum rainfall from July 1 to 9.

However this year during the same period, the province received a downpour of 72.1 mm, which is 61.6 mm more than its average.

The chart also compares other provinces in the same period. 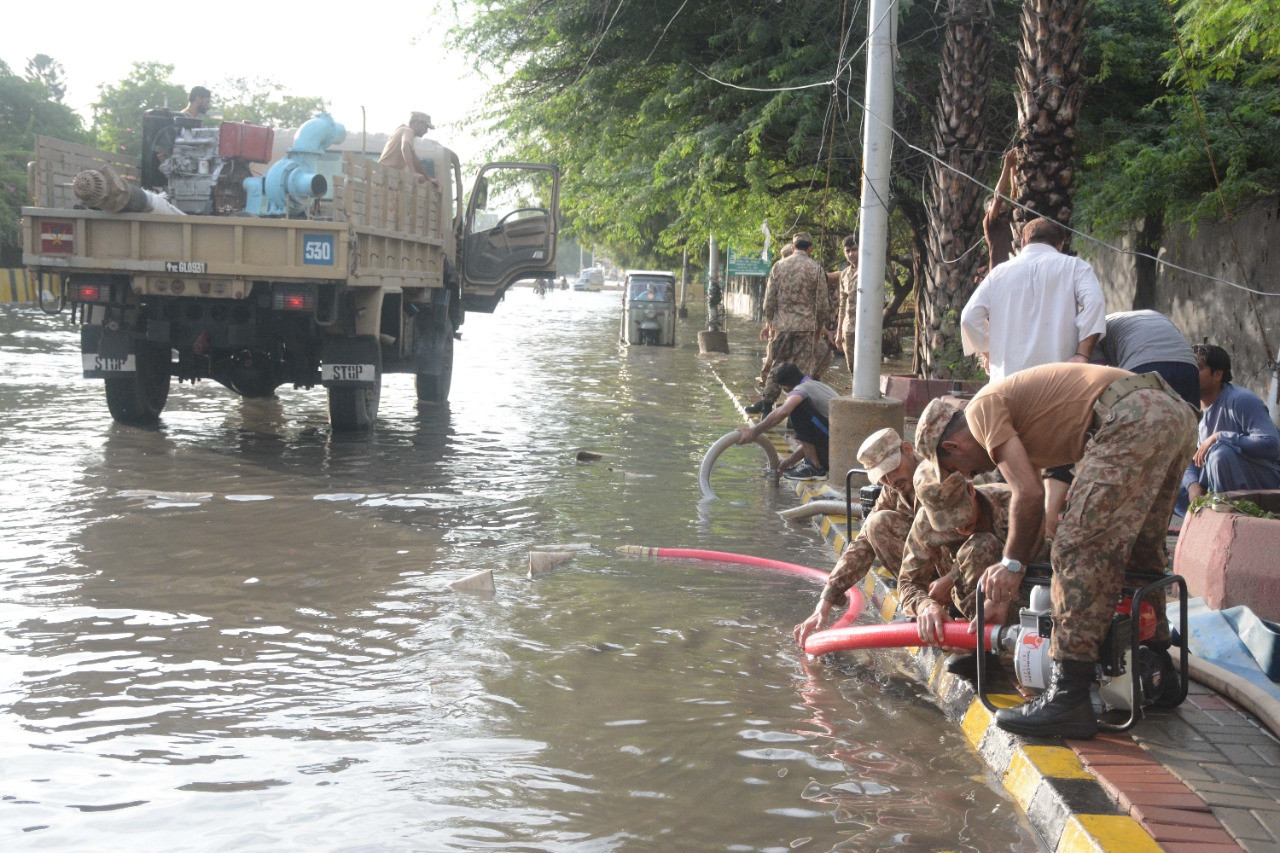 In a separate statement, Sherry appealed to the people to refrain from using plastic bags and bottles. She also asked them to offer sacrifices of animals – keeping in view the Eid-ul-Azha on Sunday (today) -- at the designated places instead of on the streets.

She added that Balochistan and Sindh were receiving more than 30 years of average rainfall.

The minister further said rainwater was standing in small and big cities. 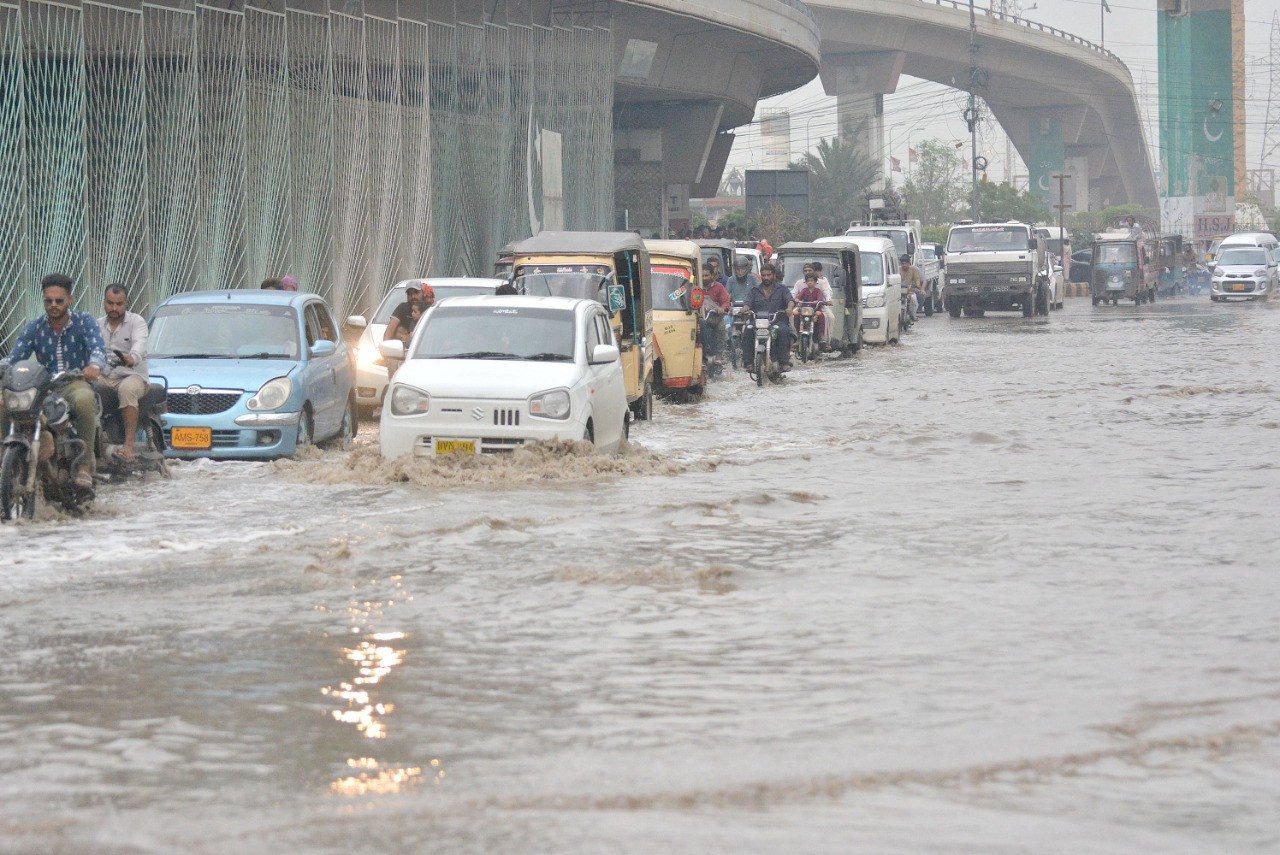 “Our drains and sewerage system is already under pressure of rainwater,” she said, adding that if sacrifices were not performed at specific and designated places, the offal on the streets would increase pollution and the drainage system would be clogged.

More heavy rains are predicted during Eid-ul-Azha as intense monsoon winds are gushing through the country.

The public is bracing for more ferocious thunderstorms that have already wreaked havoc on the ill-prepared infrastructure. 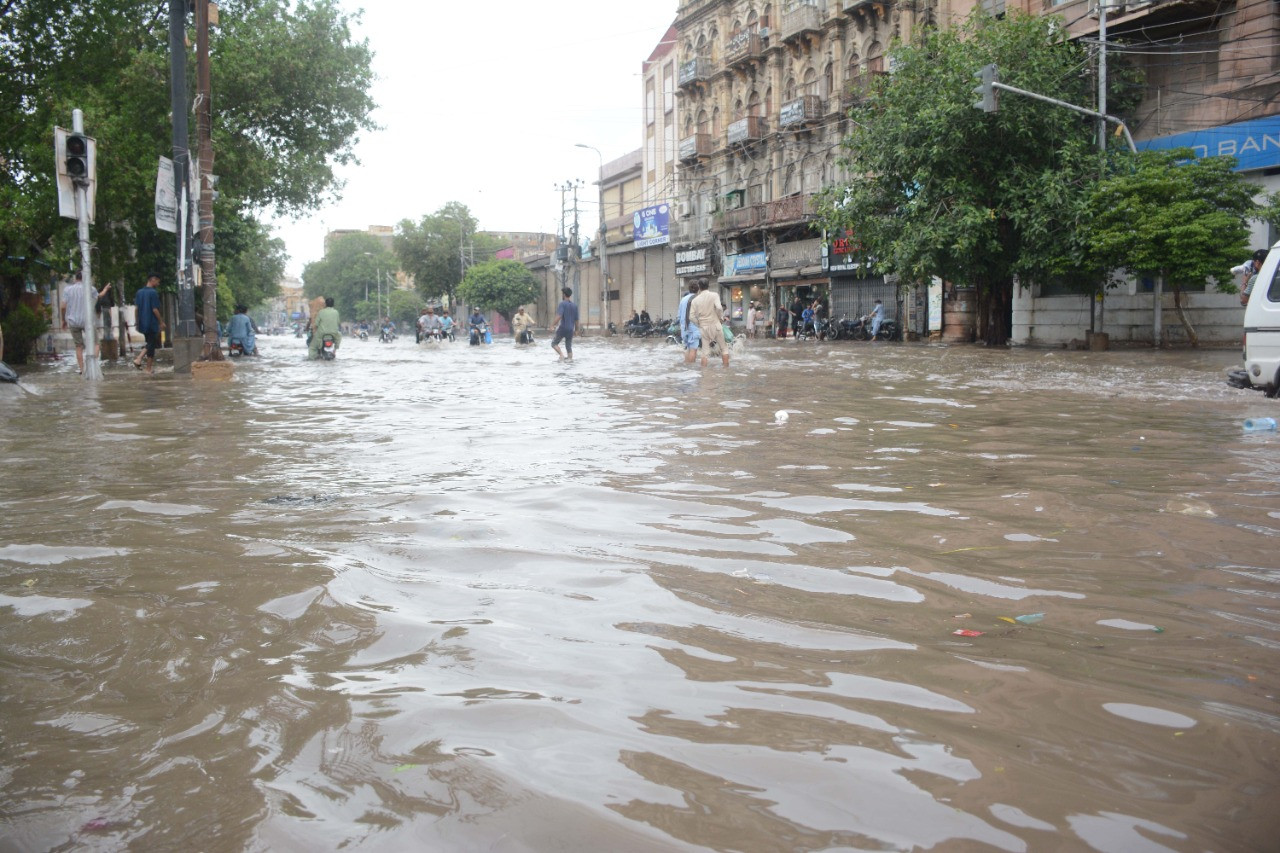 With forecasters warning of more showers on all days of the festival, it has been warned that the fresh wave of downpours is likely to hammer several areas of the country with urban flooding and landslides.

The PMD has forecast thunderstorms in Islamabad, Punjab, Khyber-Pakhtunkhwa, Balochistan, Lower Sindh, and Azad Jammu and Kashmir during the next 24 hours. 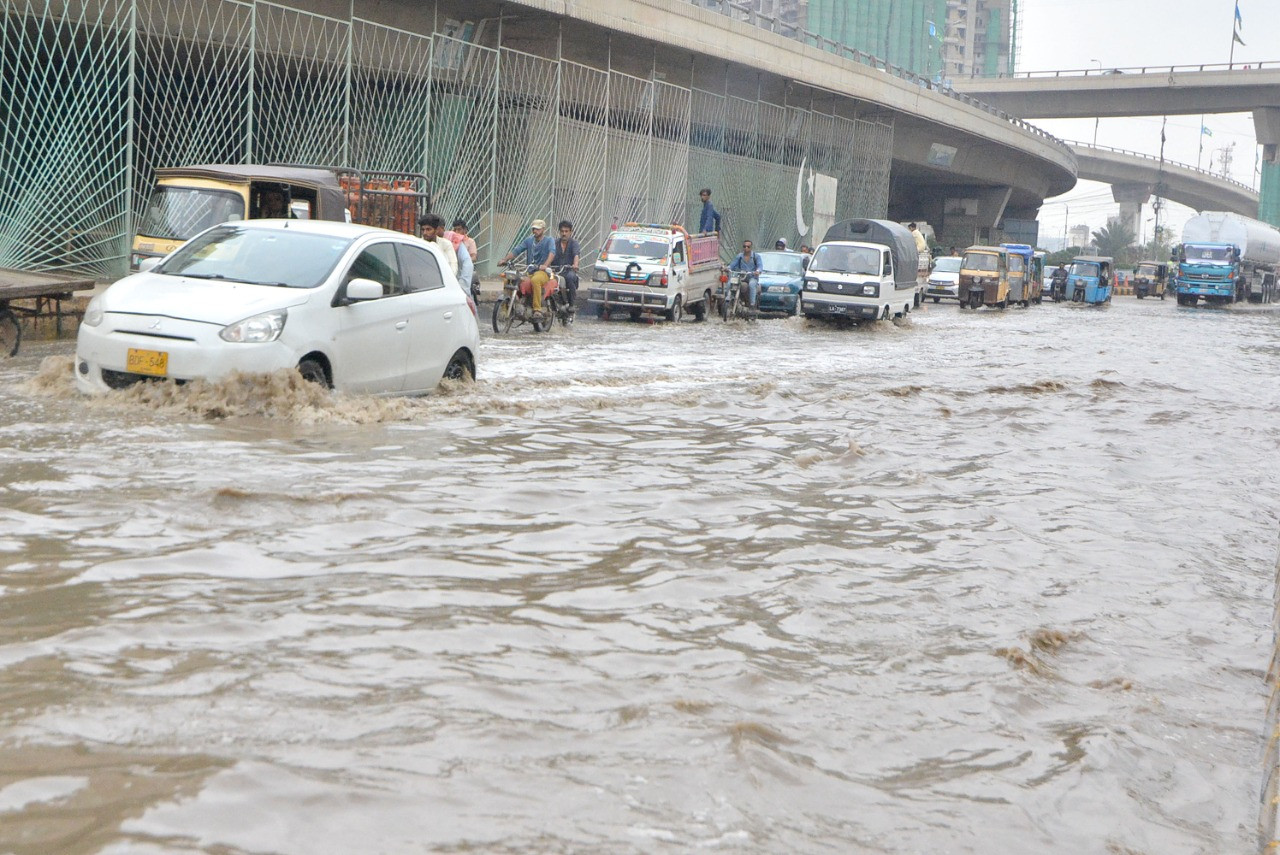 Karachi received heavy to moderate showers on Saturday which inundated several roads and aggravated issues that commuters had been facing since a day earlier.

Many of the thoroughfares of the metropolis were inundated during and after the rainfall and several vehicles stalled, further compounding the miseries of the commuters.

It was the fifth consecutive spell of rainfall to lash the city plagued with a rickety infrastructure.

Though the rain-bearing clouds collapsing in most parts of the country will bring down the mercury but are likely to pose threats to the lives and property of the people.

The NDMA has specifically advised rescue departments to make personnel, staff and equipment available to cope with any rain and flood-related incidents.

It also advised the relevant departments to ensure pre-placement of necessary inventory and equipment along with the availability of required personnel at identified vulnerable locations as well as back-up generators for de-watering pumps in case of urban flooding.

The ongoing monsoon season continued to wreak havoc in major cities across the country as people suffered from prolonged power outages while commuters were stuck in hours-long traffic jams.

The death toll from rains and flood-related incidents in Balochistan, the area-wise largest province of the country, climbed to 57 on Friday as four more bodies were recovered from across the province.

In Karachi, four people, including two women, were electrocuted in different parts of the city. Two sacrificial animals brought for Eid-ul-Azha Azha also died of electrocution.

According to reports, 38-year-old Ruqiya Mobin died after receiving an electric shock in her house at Mansehra Colony, Landhi on Friday morning while she was busy with her daily chores.

Separately, Savera, 26, also died of an electric shock as water seeped into the switchboards of her home at Mowach Goth.

A Provincial Disaster Management Authority officer said most of the casualties were reported in Quetta, Barkhan, Pishin, Kohlu, Bolan and Zhob.

The officer, on the condition of anonymity, told The Express Tribune that flash floods triggered by heavy rainfall continued to wreak havoc in Quetta and other parts of Balochistan for the fifth day in a row.

Dozens of people, who sustained injuries, were admitted to the Civil Hospital, Quetta for medical treatment. An emergency has been declared at all government-run hospitals located in all affected districts of the province.

Balochistan Chief Minister Mir Abdul Quddus Bizenjo chaired a high-level meeting on Friday to review the rescue and relief operation in the province.

Floods and torrential rains also damaged over 673 mud and brick-walled houses in Quetta and other parts of Balochistan, the PDMA official said.

Rains have left thousands of people homeless in Quetta and other affected districts.

Flash floods have also swept away small bridges and dams across Balochistan.

Balochistan Chief Secretary Abdul Aziz Uqiali visited the flood and rain-affected Pishin. The deputy commissioner there briefed him about the pace of rescue and relief operations in the district.

Rains to wreak havoc across country on Eid

Karachi likely to receive heavy to moderate rains till July 9

People in Balochistan urged to guard against LSD, Congo

Massive relief and rescue operations under way in Balochistan