Secretaries put on notice in plea against CM’s oath

Six including three firefighters faint due to suffocation

The blaze erupted at around 10:30am in the warehouse of Chase Departmental Super Store at Samia Bridge View Apartment. PHOTO: EXPRESS
KARACHI:

A man died, while six others, including three firemen fainted when a fire broke out in the basement of a departmental store located on the intersection of Kashmir Road and Jail Road on Wednesday.

The blaze erupted at around 10:30am in the warehouse of Chase Departmental Super Store at Samia Bridge View Apartment, a multi-storey building in PECHS Block 3.

The management of the super store tried to extinguish the fire with the available fire extinguishers and also made distress calls for the fire brigade.

Within minutes smoke engulfed the entire 15-storey building creating panic among the residents who rushed out. Many living on upper floors got trapped as smoke increased and had to be evacuated with the help of bamboo ladder.

Besides fire brigade, contingents of police, Rangers, volunteers of rescue services and ambulances rushed to the spot.

Fire brigade and Rangers helped evacuate the residents of the building. The bellowing smoke made visbility zero, in the chaos, a young man who had come to the building for the first time for a job interview lost his way and died of suffocation. Body of the unidentified man was recovered from the mezzanine floor. His body was sent to Jinnah Postgraduate Hospital for legal formalities. 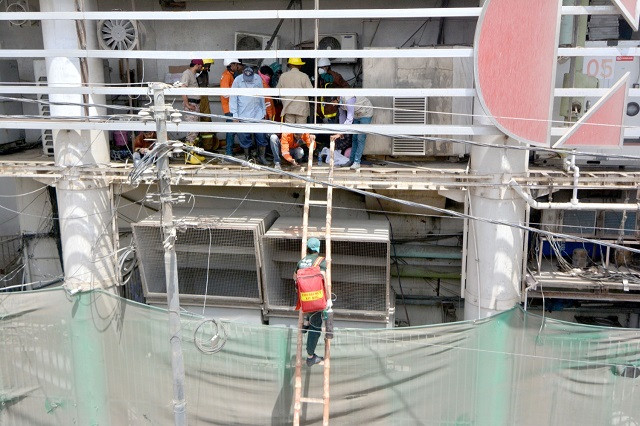 Edhi volunteers said that the fire affected six people including firemen Sikandar, Shabbir and Tahir who were rushed to Jinnah Hospital for immediate medical aid.

Fire brigade officials declared it a third-degree fire and called fire engines from across the city.

Fire fighters had to break concrete wall at many places to make way for the operation. They used plenty of foam in addition to water to extinguish the fire.

The services of Pakistan Navy were also sought during the operation.  A Pakistan Navy spokesman told that Navy's bowser was also used to douse the flames.

Speaking to media on the occasion, Chief Fire Officer (CFO) Mubeen Ahmed said, 16 fire brigade vehicles, a snorkel, rescue unit and bowser were on the spot while water board officials had also imposed emergency on various hydrants to ensure uninterrupted water supply through water tankers as well.

Assistant Commissioner (AC) Ferozabad, Asma Batool, who was present on the spot, told the media that the occupants of the flats have been shifted to safer places.

Administrator Karachi Murtaza Wahab on Wednesday visited the site of the fire at the super store on Shaheed Millat Road Jail Chowrangi. 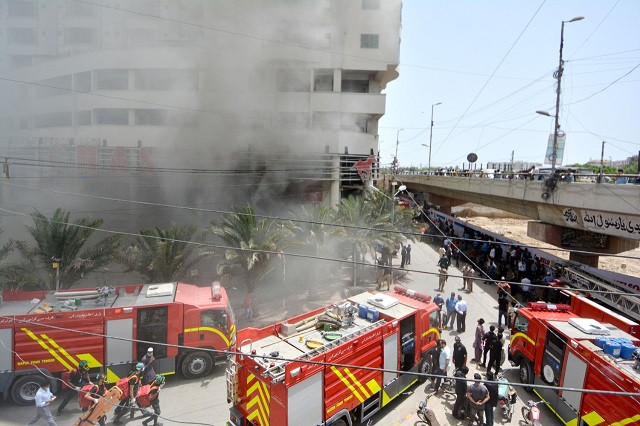 Wahab while talking to media said that the fire in the building has been brought under control but there are problems due to continuous smoke coming out of the building.

Wahab said that the fire in the basement could have caused huge loss of life and property if it had not been brought under control in time.

The administrator Karachi appreciated the performance of the fire brigade and said that our firefighters protect the lives and property of the citizens at the risk of their lives which is a duty as well as a service to the people.

Haseeb Memon, general secretary of the apartment union, told the media that when the building was constructed, the basement was shown as a parking lot in the site plan. However, the builder sold the space and basement to the Chase's management. He said that the residents of the flats have been provided parking on the upper two floors.

Meanwhile, Office Secretary Shahid Memon said that such an incident has taken place before. "For god's sake, close this store! When the fire broke out, everyone was worried about saving their belongings but no one cared about the lives of those living in the apartments. Ever since the fire broke out, we have been using stairs to get people down," he said. 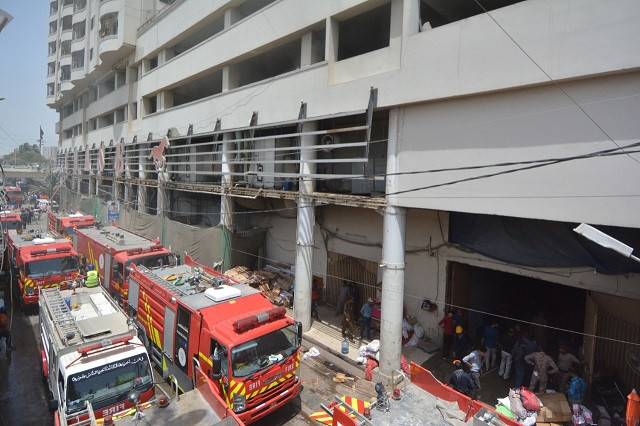 "As soon as the fire started, the electricity was cut off due to which the elevator was also shut down and we had to face severe difficulties," he added.

He lauded the work of Rangers officials and said that other agencies were doing a good job.

"There are mobile phone jammers in this area. It should be relaxed for at least two days so that we can contact our loved ones who are very worried about us," he demanded.

Firefighters in Karachi working against odds

Fire breaks out in textile factory