A recent directive by the Pakistan Electronic Media Regulatory Authority (PEMRA) on scenes involving physical shows of affection between couples on screen has left people questioning the body’s priorities. In an official document, PEMRA has asserted that no “hug/caress scenes” should be aired since, according to the directive, they go against the teachings of Islam and do not depict a “true picture of Pakistani society.”

The PEMRA document went viral on social media, with several people on Twitter asking why authorities are against consensual acts of romance on screen but do not take issue with scenes depicting domestic abuse. 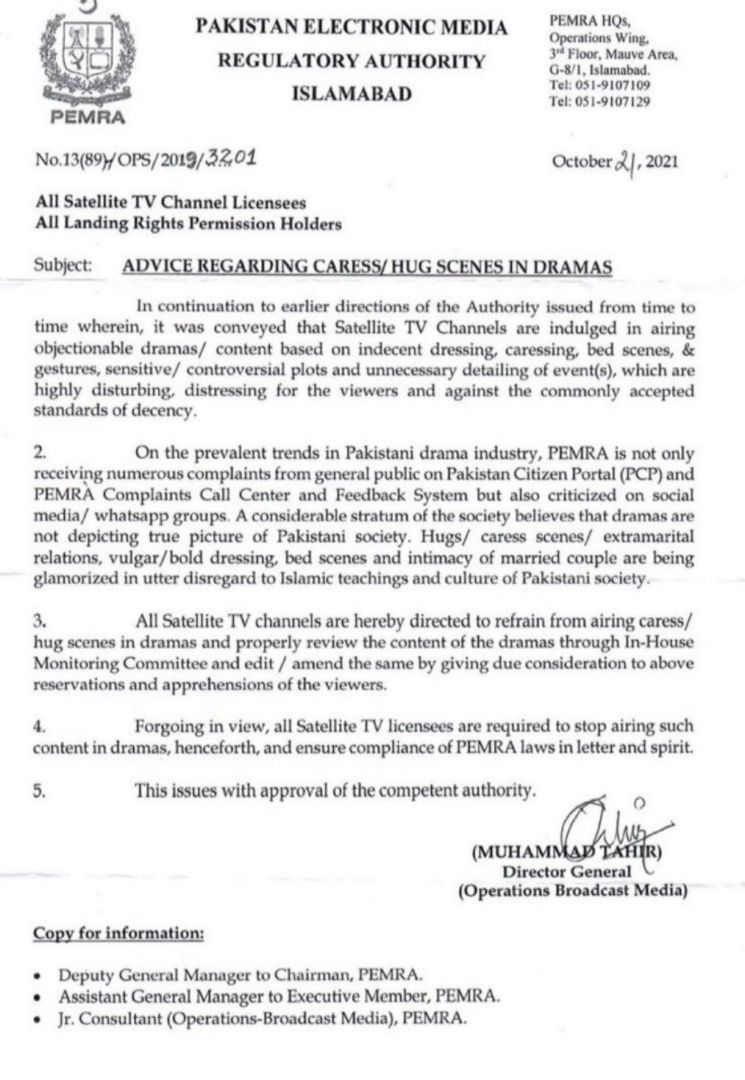 The document read, “On the prevalent trends in the Pakistani drama industry, PEMRA is not only receiving complaints from the general public on the Pakistan Citizen Portal (PCP) and PEMRA Complaints Call Center and Feedback System but also criticised on social media/WhatsApp groups.”

Several Twitter users took to the app to question the authority’s perception of Pakistani culture, as well as ask why acts of violence and abuse are not condemned in the same manner.

Pemra has really got its priorities straight https://t.co/jlfEOamkKL

PEMRA finally got something right:

Our “culture” is control, abuse and violence, which we must jealously guard against imposition of such alien values pic.twitter.com/MJQekyT1nH

Hugs, caress scenes, bold dressing and intimacy between married couples shouldn't be glorified and should be banned as this is not our culture.

So basically PEMRA said that intimacy with your spouse and hugging your partner is unislamic ,whereas inflicting physical and mental torture on your partner is according to Shariah and culture of Pakistan.

Some users shared content depicting themes of incest, asking why how PEMRA could allow that but take issue with hugging

pemra will ban hugging but not this and honestly im not even surprised pic.twitter.com/pjMxE76HBg

PEMRA has ordered against the airing of any 'objectionable' content, stating, "All satellite TV licenses are required to stop airing such content in dramas, henceforth, and ensure compliance of PEMRA laws in letter and spirit."