Envoy calls for removal of Covid travel curbs on Iran

Net foreign direct investment in Pakistan jumped to an 11-month high at $236 million in September 2021, reflecting a revival of confidence among long-term global investors in the national economy.

The investment primarily entered IT and telecommunication, power, oil and gas exploration, and financial sectors.

Surprisingly, multinational companies (MNCs) from the United States made the largest investment of $68.7 million in different sectors of Pakistan’s economy in September despite some deterioration in diplomatic ties between Islamabad and Washington following the end of the US-led war in Afghanistan.

The Netherlands, the UAE, Hong Kong, China, and the UK were other notable investors in Pakistan during the month of September, according to central bank data.

Foreign investors are aggressively pouring money into Pakistani startups and the IT and telecommunication sector owing to improved infrastructure in the digital ecosystem.

“This part of foreign investment is reflected in the overall FDI,” BMA Capital Executive Director Saad Hashmey said while talking to The Express Tribune. 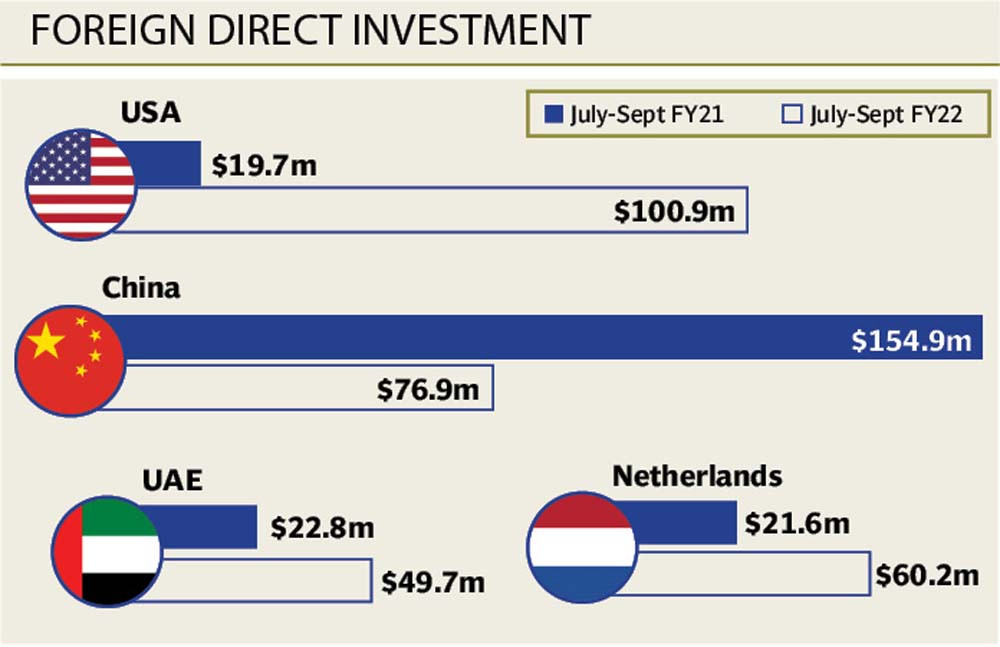 Foreign investors made improved investments in September, which helped the country to achieve its quarterly (Jul-Sept) target.

“Global investors had avoided making such investment in the first two months of the quarter keeping in view the expected depreciation of the rupee against the dollar,” an expert said on condition of anonymity.

“They, however, injected the remaining amount, set aside for the quarter, in September,” he said.

“Stability of the rupee against the US dollar and other major currencies is a must to attract foreign investment to different sectors of the economy,” he said.

“Pakistan is expected to attract FDI worth $1.5-2 billion in the fiscal year 2021-22 keeping in view the revival of economic activities,” Hashmey said.

“Pakistan has a huge potential to attract foreign investment given that it is the sixth-largest country in the world by population and many sectors of the economy still remain untapped.”

The expert, who spoke on the condition of anonymity, termed it a good omen that global investors were making notable investments in the country despite volatility in the rupee and overheating of the domestic economy. “This depicts that global investors are bullish on Pakistan’s economy,” he said.

Experts said that despite massive depreciation in rupee and high inflation reading, the country will still achieve an economic growth target of 4.8% in FY22.

The financial sector received the single largest investment worth $61.4 million in September followed by the power sector which secured $45.2 million.

The four sectors also secured a huge chunk of total FDI received in the first quarter (Jul-Sept) of the current fiscal year 2021-22.