Hundreds of people protested in Kabul on Friday, demanding that the United States release billions of dollars in central bank reserves blocked outside Afghanistan. PHOTO: COURTESY/TOLONEWS

Hundreds of people protested in Kabul on Friday, demanding that the United States release billions of dollars in central bank reserves blocked outside Afghanistan as the new Taliban government struggles to contain a deepening economic crisis.

The well-organised demonstration, featuring banners with messages printed in English, came as Taliban officials stepped up demands for more than $9 billion in foreign reserves held abroad to be handed over.

"We want them to unfreeze this money as it's only Afghanistan's money," said Nooruddin Jalali, a member of the Afghan Muslim youth association NAJM, who attended the protest.

"It is Afghans' and our businessmen's money which is used for buying food and medicine."

Taliban spokesman Suhail Shaheen tweeted about the protest, underlining the new government's support for the demonstrators and their demands.

People in the capital city of Kabul took to the street, demanding immediate release of Afghanistan’s central bank reserves. They were chanting, our people are facing hard economic situation, there is urgent need for unfreezing our asset to overcome the harsh poverty situation. pic.twitter.com/InsXcgKKjb

Pressure to release central bank funds has increased as the economic crisis following the collapse of the Western-backed government last month worsened, leaving millions struggling to afford spiralling prices for food and other basic necessities.

Severe drought has threatened famine in many parts of rural Afghanistan, but the problems have also reached cities like Kabul, where many government workers have been unpaid for weeks while banks have imposed strict limits on cash withdrawals. 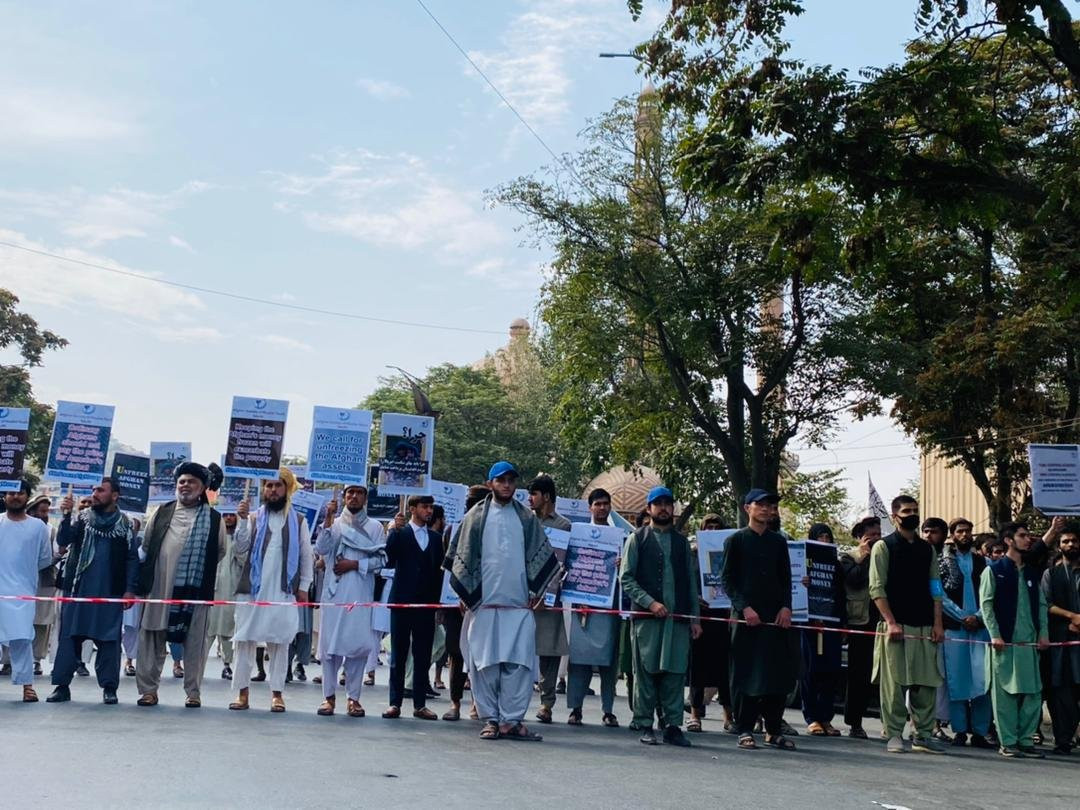 People have been forced to queue for hours outside banks and are limited to taking out $200 or 20,000 afghanis a week to try to prevent a run of withdrawals that could push the financial system into collapse.

The Taliban have accused officials from the previous administration of making off with millions of dollars as President Ashraf Ghani fled Kabul, but the crisis has put them under heavy pressure as they seek to adapt to peacetime rule.

At Friday's protest, demonstrators focused their anger on US officials, with banners carrying slogans like: "Ordinary Afghans should not pay the price for America's defeat."

Kabul resident Rematullah said the issue was unrelated to problems Washington may have with any individuals.

Blinken sees unity on Taliban after talks with Pakistan, China