The dossier – a reality check ahead of UNGA

India’s Prime Minister Narendra Modi will be sharing with the world his government’s achievements on the domestic front at the United Nations General Assembly on September 25.

But all his sweet talk of the “Incredible India” would be simply an eyewash to cover up the stench of the heinous crimes committed by the ruling junta against the minorities and in particular the Kashmiri Muslims.

The Indian premier, backed by the extremist RSS and a staunch Hindutva approach, however, would have to do a lot more, as things are heating up back home; where politically motivated prosecutions, harassment, online trolling, and even lynching of opponents is now a norm.

The situation for Modi has become a bit more difficult as days before his address Pakistan unveiled an incriminating piece of evidence; laying bare gross, systematic, and widespread human rights violations perpetrated by the 900,000 Indian occupation forces in Indian Illegally Occupied Jammu and Kashmir (IIOJK).

The 131-page dossier covered separate chapters on war crimes committed by the Indian army, the indigenous Kashmiri freedom movement and India’s false flag operations, and, how the United Nations Security Council resolutions and international law were being violated through an orchestrated effort to bring about a demographic change in the occupied territory. 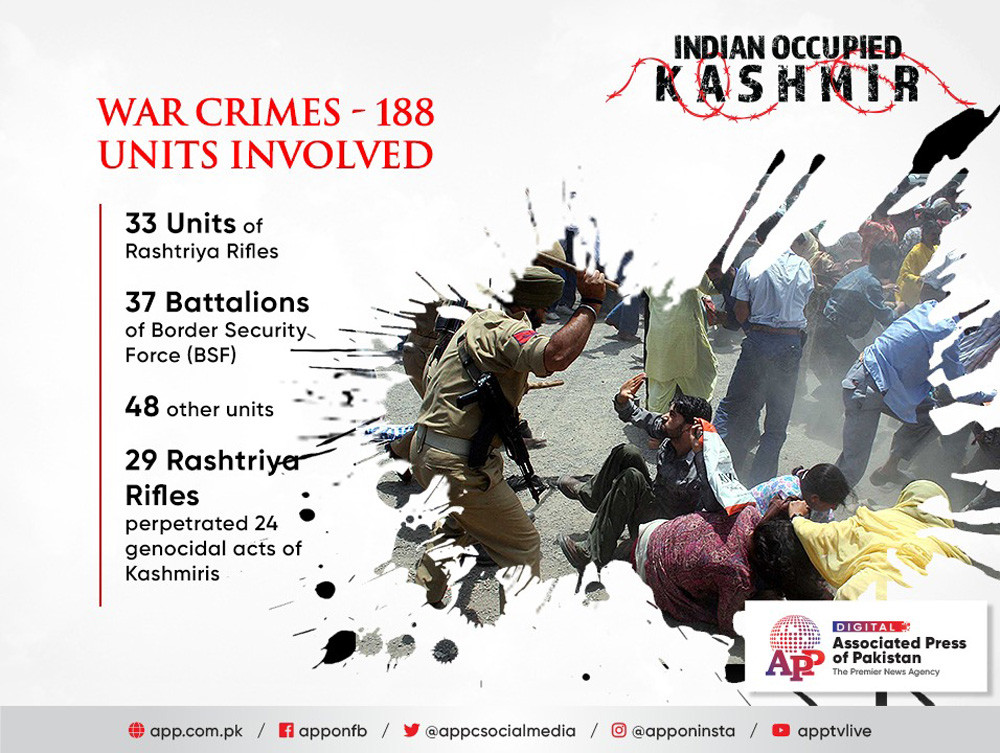 Jammu and Kashmir remains one of the oldest unresolved disputes on the agenda of the UN Security Council and for the past seven decades, India has resorted to ruthless oppression, committing grave human rights violations with impunity against the Kashmiris.

The office of the High Commissioner for Human Rights (OHCHR), in its two dedicated reports on the human rights situation in Jammu and Kashmir in 2018 and 2019 expressed concerns about the excessive use of force, including the use of pellet-firing shotguns, detention of Kashmiris political leadership, curbs on freedom of religion and belief, movement, peaceful assembly, and restrictions on the rights to health, education, and freedom of expression.

Several UN Special Rapporteurs have termed the overall human rights situation in IIOJK a “free fall” and categorised the communications blockade and curfew as “a form of collective punishment of the people of Jammu and Kashmir, without even a pretext of a precipitating offence”.

The most damning part of the report are details of War Crimes; based on testimonies of victims and several independent investigation reports by human rights organisations, civil society, and the media.

The dossier covers accounts of 3,432 cases of war crimes perpetrated by senior officers of the Indian occupation forces. The crimes catalogued in the dossier are corroborated by audio and video evidence that has been meticulously collected over time. 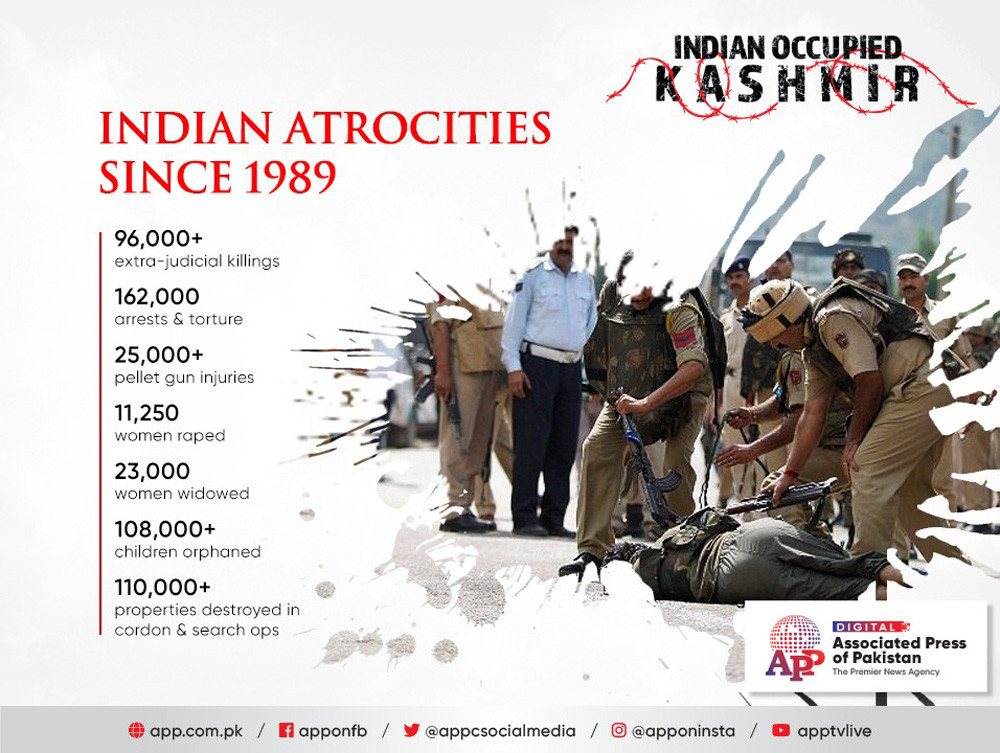 Referring to the crimes amounting to “Genocide” the dossier points that since 1947, over 400,000 Kashmiris have been massacred in IIOJK due to their ethno-religious identity. 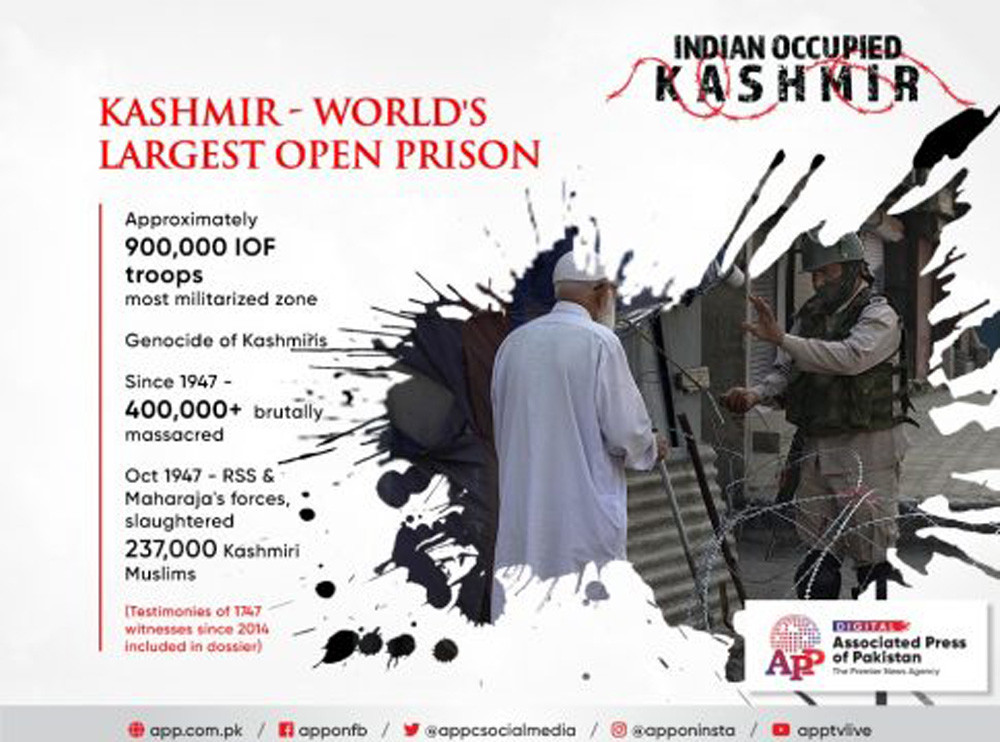 The dossier also gave gruesome details of the “Mass Unmarked Graves”, as yet another evidence of genocide and war crimes. The dossier reveals details of 8,652 unmarked graves that have been identified in 89 villages and 6 districts of IIOJK. Earlier, the OHCHR also revealed details of mass graves in the Kashmir valley and Jammu region in its two reports.

In 2009, the International People’s Tribunal on Human Rights and Justice in IIOJK produced a report revealing the details of 5,643 mass graves in 55 villages. Around 154 graves had two bodies each while 23 graves had up to 17 bodies in each grave. 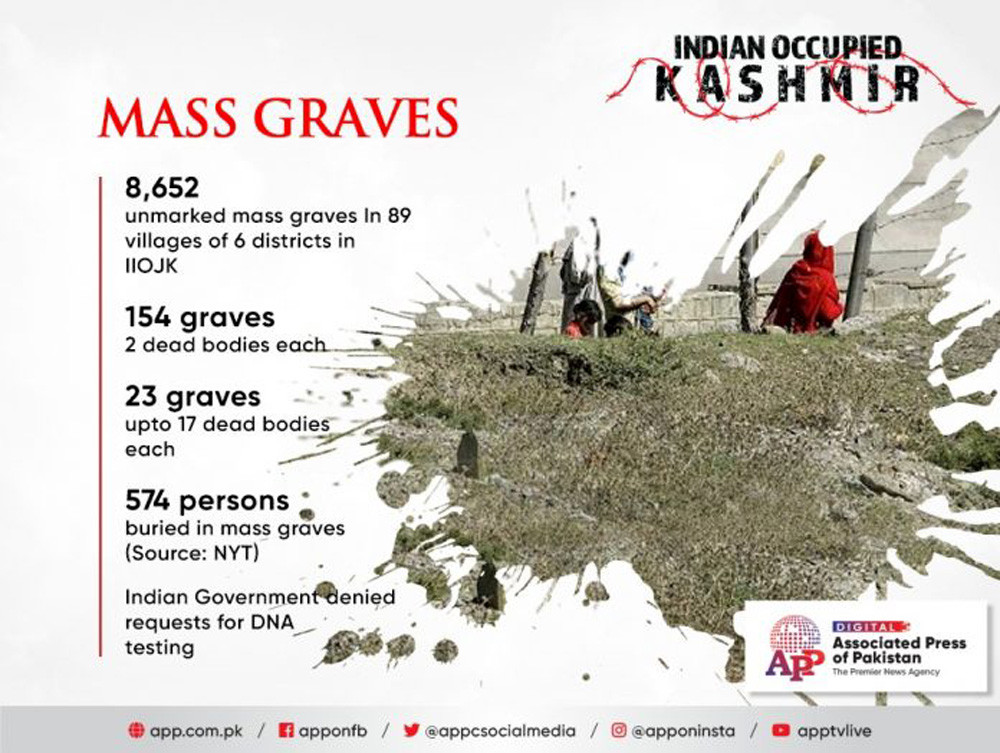 The dossier points that rape and sexual violence have been used widely as a weapon of war by the IOF. According to the Human Rights Watch, Kashmiri women are subjected to rape by occupation forces: during ‘search and cordon operations’ and during reprisals after military ambushes.

One of the most horrific incidents of sexual violence in the occupied territory is the Kunan Poshpura mass rapes and gang rapes of 1991 where more than 300 Indian army soldiers of “Rajputana Rifles”, under the command of Col. KS Dalal, raped as many as 150 women in just one night. Despite condemnation by the international community, and even after 30 years, the Indian state has refused to acknowledge the crimes, while the survivors are left with no avenues to pursue justice, even as the IOF has continued its barbarism with complete impunity.

The dossier points that violence against women has increased in recent years. Since 2014, 3,884 women and girls have been raped and gang-raped by occupation forces, while 662 women have been killed. 141 perpetrators, involved in 63 cases of sexual violence, have been identified in the dossier. 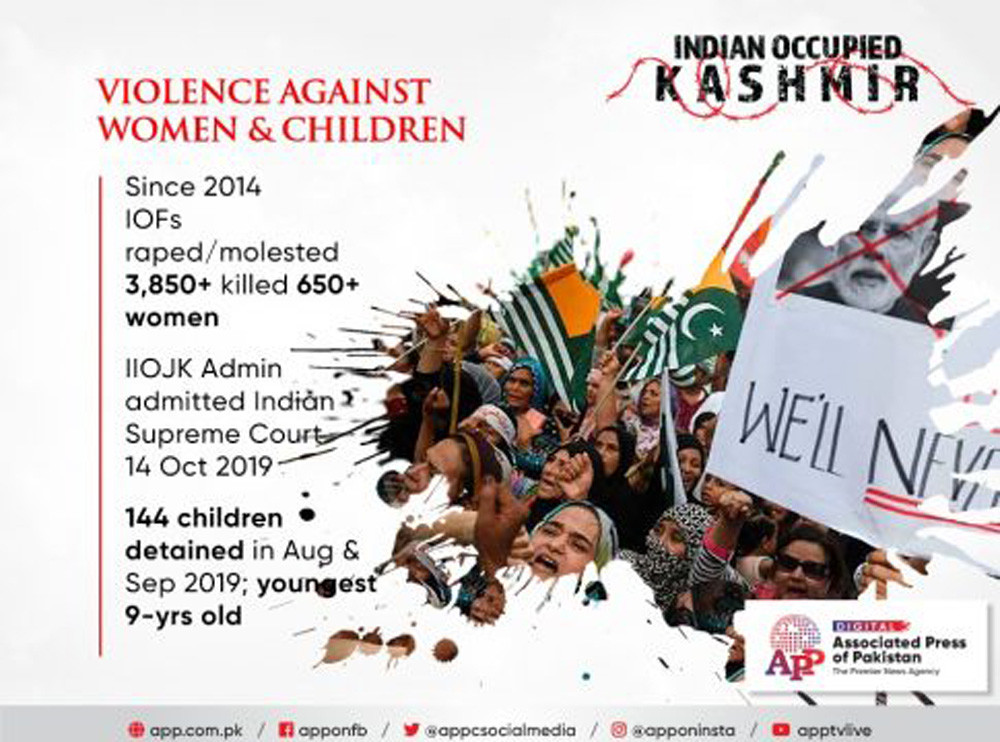 According to the Human Rights Watch the Indian government had already been using counterterrorism laws, allegations of sedition, and other serious charges to jail peaceful activists.

Now, the list of those the government and its supporters view with suspicion has grown, including philanthropic actors, poets, jewellers, journalists, social media executives, entertainment companies, and other businesses.

The world has started to take note of the double talk by the Indian leadership, and it’s time that the UN General Assembly demands an impartial investigation into the war crimes, genocide and torture and takes the perpetrators to task.