Britain asks: Is America back or has it turned its back?

The humiliation of the lightning Taliban takeover in Afghanistan after a 20-year war that cost hundreds of thousands of lives has raised a question for the United States' staunchest European ally: Is America really back as President Joe Biden promised?

Britain fears the Taliban's return and the vacuum left by the West's chaotic withdrawal will allow militants from al Qaeda and Islamic State to gain a foothold in Afghanistan, just 20 years after the Sept. 11, 2001 attacks on the United States.

British Defence Secretary Ben Wallace cast the 2020 Doha withdrawal accord struck by US President Donald Trump's administration as a "rotten deal". Wallace said Biden's decision to leave Afghanistan was a mistake that had enabled the Taliban to re-emerge in power.

Such questioning and such emotion - Wallace was on the brink of tears in one interview - is rare for Washington's closest European ally, which has stood by the United States in almost every major conflict since World War Two apart from Vietnam.

After the tumult of Trump's presidency, Biden has repeatedly promised that "America is back". Some British diplomats are questioning not only that assessment but also the implications for long-term national security.

"Is America back or has it turned its back?" one British official said, speaking on condition of anonymity. "It looks very much as if the Americans have gone home in a rather Trumpian manner - rushed, chaotic and humiliating."

Western security sources fear al Qaeda, whose founder Osama bin Laden was harboured by the Taliban before 9/11, could regain a foothold in Afghanistan within months. Such a scenario, they say, would threaten both the United Kingdom and the wider West.

British diplomats compared the scale of the West's humiliation to the 1975 fall of Saigon that ended the Vietnam War, or to the 1956 Suez Crisis, a strategic blunder which confirmed the loss of Britain's imperial power. 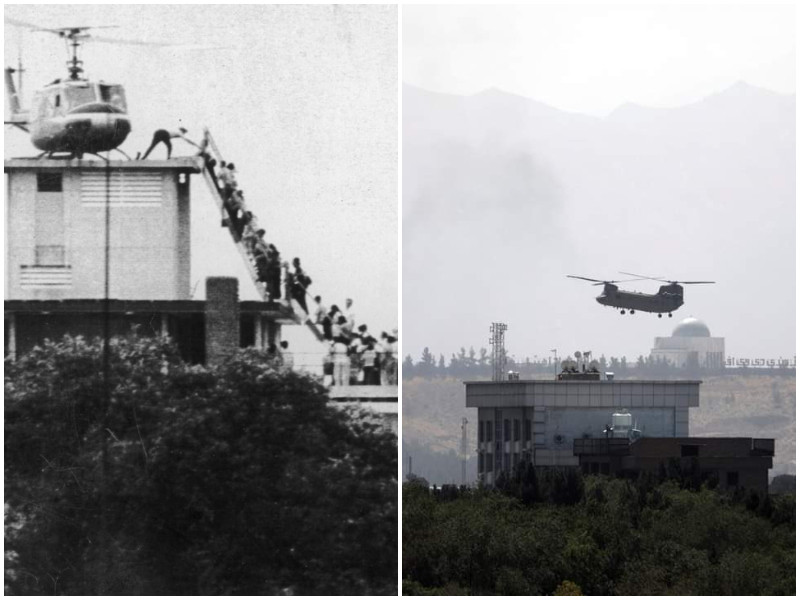 Biden has repeatedly argued that a continued US military presence in Afghanistan would not have significantly changed the situation unless the Afghan military could hold its own country.

But British diplomats said the Afghan debacle will undermine the West's standing in the world, rally jihadists everywhere and strengthen the arguments of Russia and China that the United States and its allies lack both mettle and staying power.

"We must be clear about this: this is a humiliating moment for the West," said Mark Sedwill, who was Britain's most senior civil servant and national security adviser under former Prime Minister Theresa May.

Some British veterans questioned their own sacrifice. Some spoke of a feeling of betrayal. Some said their fallen comrades had died in vain.

"Was it worth it, probably not. Did I lose my legs for nothing, looks like it. Did my mates die in vain. Yep," said Jack Cummings, a former British soldier who lost both legs on Aug. 14, 2010 while searching for improvised explosive devices (IED) in Afghanistan.

"Many emotions going through my head - anger, betrayal sadness to name a few," said Cummings.

Britain was one of a handful of nations prepared to do some of the toughest fighting alongside US soldiers in Afghanistan, for example in the southern province of Helmand, considered to be the country's most dangerous.

Britain has lost 457 armed forces personnel in Afghanistan, or 13 per cent of the international military coalition's 3,500 fatalities since 2001.

Brown University's Cost of War Project estimates 241,000 people have died as a direct result of the war. Brown estimates the Afghan war has cost the United States $2.26 trillion.

British diplomats cast both the Doha agreement of February 2020, struck during Trump's presidency, and Biden's April announcement of a withdrawal as capitulations which destroyed morale in Afghanistan.

Trump said his withdrawal plan had been ruined by Biden.

"The Taliban no longer has fear or respect for America, or America’s power," he said in a statement.

The British empire suffered humiliation in Afghanistan during the 1839-1842 Anglo-Afghan war, but after the Sept. 11 al Qaeda attacks, then-Prime Minister Tony Blair joined US President George W. Bush in invading Afghanistan to overthrow the Taliban.

Fast forward 20 years: the Taliban are back in power.

"The fall of Kabul is the biggest foreign policy disaster since Suez," said Tom Tugendhat, chairman of the British parliament's foreign affairs committee.

"It revealed the nature of US power and our inability to hold a separate line," said Tugendhat, who served as a British soldier in both Iraq and Afghanistan. "As Kabul shows, we need our allies to stand with us."

'Pakistan to continue efforts to encourage women education in Afghanistan'

Britain 'not going back' to Afghanistan

'This is not Saigon': US says Afghanistan is different from Vietnam