Britney Spears' father agrees to step down from conservatorship

US, UK sending troops to evacuate nationals as Taliban blitz across Afghanistan

The fall of major cities is a sign that Afghans welcomed the Taliban, says a spokesperson of the group

A Taliban fighter holds a rocket-propelled grenade (RPG) along the roadside in Herat, Afghanistan's third biggest city, after government forces pulled out following weeks of being under siege. Photo: AFP
KABUL:

The United States and Britain ordered the deployment Friday of thousands of troops to Afghanistan to evacuate their nationals, as the Taliban overran more key regional cities in an offensive that has left the capital dangerously exposed.

The orders came as the Taliban took control of Kandahar, the nation's second-biggest city in the insurgency's heartland, leaving only Kabul and pockets of other territories in government hands.

They were also closer to taking Logar province, at the gates of Kabul, with a Taliban spokesperson saying insurgents had captured the police headquarters and city jail in the capital, Pul-e-Alam.

Earlier Friday, officials and residents in Kandahar told AFP that government forces had withdrawn en masse to a military facility outside the southern city.

Hours later, the Taliban said they had also taken control of Lashkar Gah, the capital of neighbouring Helmand province.

A security source confirmed the fall of the city, telling AFP that the Afghan military and government officials had evacuated Lashkar Gah after striking a local ceasefire deal with the militants. 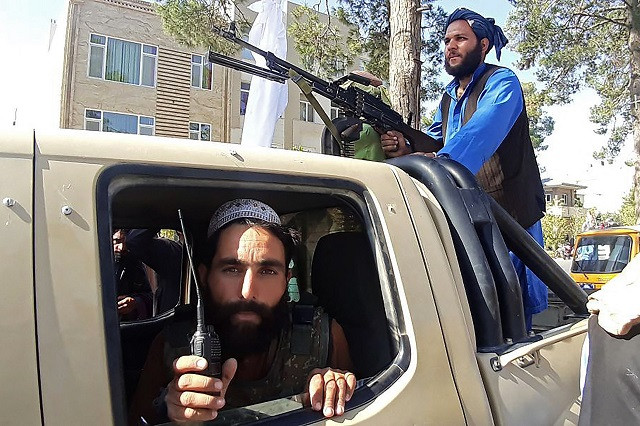 Taliban fighters are pictured in a vehicle along the roadside in Herat, Afghanistan's third biggest city, after government forces pulled out following weeks of being under siege. Photo: AFP

The government has now effectively lost control of most of the country, following an eight-day blitz into urban centres by the Taliban that has also stunned Kabul's American backers.

The first wave of the offensive was launched in early May after the United States and its allies all but withdrew its forces from Afghanistan, with President Joe Biden determined to end two decades of war by September 11.

Biden has insisted he has no regrets with his decision, but the speed and ease of the Taliban's urban victories in recent days has been a surprise and forced new calculations.

Washington and London announced plans late Thursday to quickly pull out their embassy staff and other citizens from the capital.

"We are further reducing our civilian footprint in Kabul in light of the evolving security situation," US State Department spokesperson Ned Price told reporters, while noting the embassy would remain open.

The Pentagon said 3,000 US troops would be deployed to Kabul within the next 24 to 48 hours, underscoring that they would not be used to launch attacks against the Taliban.

The conflict has escalated dramatically since May, when US-led forces began the final stage of their troop withdrawal.

After months of taking what were considered less strategically important rural areas, the Taliban zeroed in on the cities.

In the past week, the insurgents have taken over a dozen provincial capitals and encircled the biggest city in the north, the traditional anti-Taliban bastion of Mazar-i-Sharif, which is now one of the few holdouts remaining.

"I spent a distressing night as there was fighting, but in the morning it was quiet," he said.

"I came out this morning, I saw Taliban white flags in most squares of the city... I thought it might be the first day of Eid."

And in Herat on Friday, the Taliban said they had captured the city's long-time strongman Ismail Khan who helped lead the defence of the provincial capital along with his militia fighters.

The warlord's spokesperson later confirmed that Khan had been allowed to return to his residence following negotiations with the Taliban.

Pro-Taliban social media accounts have boasted of the vast spoils of war captured by the insurgents, posting photos of armoured vehicles, heavy weapons and even a drone seized by their fighters at abandoned military bases.

After being under siege for weeks, government forces on Thursday pulled out of Herat -- an ancient Silk Road city near the Iranian border -- and retreated to a district army barracks.

On Thursday, the interior ministry also confirmed the fall of Ghazni, about 150 kilometres from Kabul and along the major highway to Kandahar and the Taliban heartlands in the south.

As the rout unravelled, three days of meetings between key international players on Afghanistan ended in Qatar without significant progress Thursday.

In a joint statement, the international community, including the United States, Pakistan, the European Union and China, said they would not recognise any government in Afghanistan "imposed through the use of military force." 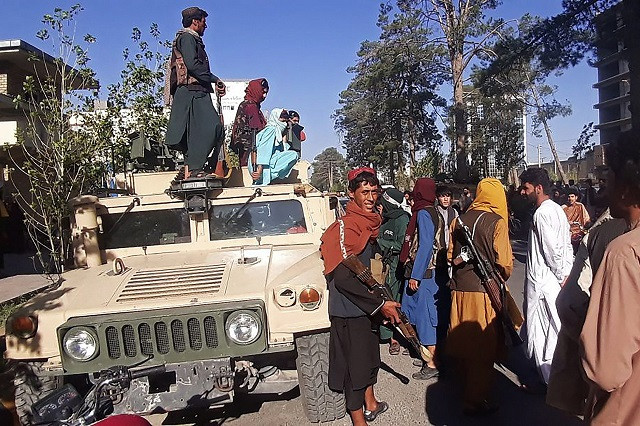 Taliban fighters stand guard along the roadside in Herat, Afghanistan's third biggest city, after government forces pulled out following weeks of being under siege. Photo: AFP

The United Nations has warned that a Taliban offensive reaching the capital would have a "catastrophic impact on civilians" but there is little hope for negotiations to end the fighting with the Taliban apparently set on a military victory.

In the deal withdrawal struck with former US President Donald Trump's administration last year, the insurgents agreed not to attack US-led foreign forces as they withdrew.

They also made a commitment to discuss peace but intermittent meetings with government representatives have proved fruitless. International envoys to Afghan negotiations in Qatar called for an accelerated peace process as a "matter of great urgency" and for a halt to attacks on cities.

A Taliban spokesperson told Al Jazeera: "We will not close the door to the political track."

Prime Minister Imran Khan said this week the Taliban had refused to negotiate unless Ghani resigned. Many people on both sides would view that as tantamount to the government's surrender, leaving little to discuss but terms.

The UN Security Council was discussing a draft statement that would condemn the Taliban attacks, threaten sanctions, and affirm the non-recognition of an Islamic Emirate of Afghanistan, diplomats said.

Taliban racial profiling and the US