Deputations a source of resentment among permanent employees, who believe they were ignored during promotions

The Establishment Division deputed another officer, Jawad Paul, on Tuesday as the Supreme Court Registrar for a period of three years.

According to a notification issued, "Jawad Paul, a BS 21 officer of Pakistan Administrative Service, presently posted as Additional Secretary, Prime Minister Office, is transferred and his services are placed at the disposal of Supreme Court of Pakistan, for his appointment as Registrar (BS 22), initially for the period of three years, under section 10 of the Civil Servants Act, 1973, with effect from August 1, 2021."

It has been learnt that deputationists occupy key administrative positions in the SC, causing resentment among permanent employees, who believe they were being ignored during promotions.

Muhammad Ali, a BS-21 officer, was a permanent employee but was transferred to the Federal Judicial Academy from where he retired in March 2021.

The SC has been acquiring services of a civil servant on deputation for the registrat's post since the retirement of Dr Faqir Hussain, who also got a one-time job extension. Dr Hussain was appointed by former chief justice Iftikhar Muhammad Chaudhry.

Dr Hussain was followed by Tahir Shahbaz, who was then replaced by Arbab Arif. The top administrative post in the apex court is now occupied by Khawaja Daud.

Senior lawyers believed the post of the SC's registrar was a sensitive one should therefore, be better to acquire services of a high court or lower court judge.

The lawyers said that hiring civil servants after every three years would not send a good message to the public, as thousands of employees had been repatriated to their parent departments due to the apex court’s interference.

They maintained that if permanent employees were not eligible to perform at key posts, specialists should be hired from different sectors for their capacity building. Superior bars have already disapproved of the trend of hiring civil servants to the apex court on deputation.

Under the prevailing circumstances, wherein allegations of the executive influencing the judiciary are being levelled, the apex court must refrain from appointing DMG officers on key posts of the SC. 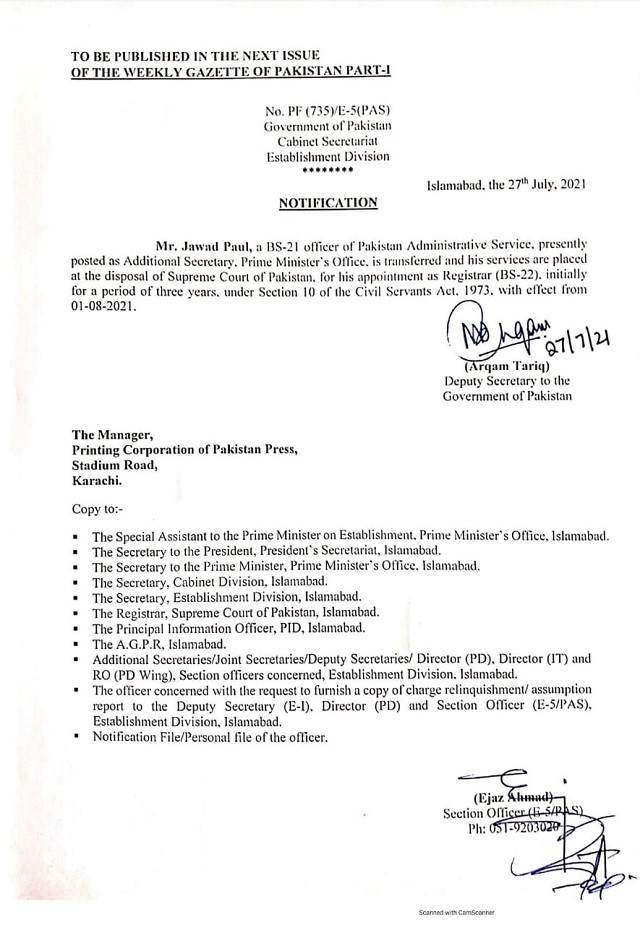 A copy of the letter issued for Jawad Paul's appointment available with The Express Tribune. PHOTO: EXPRESS