Pakistan hands over seven containers of Covid supplies to Afghanistan

Addressing the "CPC and World Political Parties Summit" held virtually to mark the 100th anniversary of the founding of the Communist Party of China on Tuesday, the premier said that Pakistan-China’s strategic partnership reflected the time-tested ties between the two ‘Iron brothers’ as both countries shared objectives for global peace, economic cooperation and wider regional connectivity.

Lauding the efforts of the Chinese leadership especially President Xi Jinping, the prime minister said that CPC’s had led to all-round national development and poverty eradication in China, a great achievement, and hoped that these measures would be emulated by Pakistan.

He said the CPC leadership had opened new vistas of thoughts for the political parties across the world.

He said that President Xi’s visionary leadership has played a pivotal role in China’s transformation and continued rise. "His people-centric philosophy has made a critical difference as China has eliminated extreme poverty, one of the greatest achievements in the history of mankind, and achieved CPC's goal of building a ‘moderately prosperous society'." 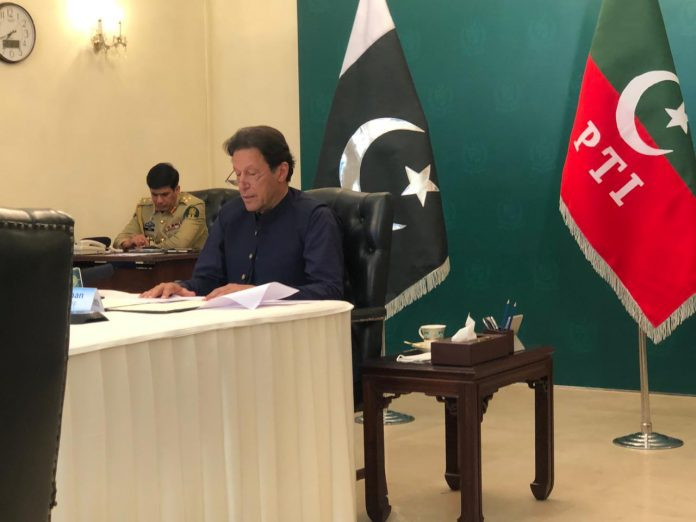 The premier said that President Xi’s vision of shared prosperity, through the BRI, has made a major impact on global sustainable development, thus proving his credentials as a world statesman. "Under President Xi’s stewardship, China has achieved major success in the ‘people’s war’ against the Covid-19 pandemic."

PM Imran said that President Xi’s declaration of making the Covid-19 vaccines a global public good is reflective of his compassion and fairness.

He said that the CPC’s mission of ‘Great Rejuvenation of the Chinese nation’ and PTI’s vision of ‘Naya Pakistan’ reflect the respective aspirations of the people of the two countries. "I formed the Pakistan Tehreek-e-Insaaf 25 years ago on the principles of accountability, transparency, meritocracy and Islamic Welfare to break the vicious cycle of elite capture, corruption and nepotism."

The premier said that the PTI remains committed to its original mission of establishing rule of law and setting up a society that is humane and compassionate. "Today, the Ehsaas Programme launched by PTI government last year, is one of the leading social protection programmes in Asia. In its second phase, we envisage to provide social protection to 8 million of our poorest citizens."

The prime minister also said that his government has made universal health coverage a priority in the health sector reforms. "Under the ‘Ehsaas Sahulat’ programme, we aim to provide free of cost health insurance initially to the families living below the poverty line, and subsequently to families that are in the provinces governed by the PTI."

He said that the 10 billion tree tsunami project reflects the government's commitment to countering environmental degradation and reversing biodiversity loss. "We are ready to contribute more than our share to protect this invaluable planet and help it heal from centuries of neglect."

In the wake of the emerging global and regional environment, the premier said that Pakistan has recalibrated its priorities from geo-politics to geo-economics. "The China-Pakistan Economic Corridor (CPEC), the flagship project of BRI, complements Pakistan’s renewed efforts of this geo-economic shift with an emphasis on economic integration and regional connectivity," he added.

PM Imran said that turning CPEC into "green CPEC" is a priority for Pakistan in line with the government’s green vision, which aligns perfectly with President Xi’s vision for green China. "Our abiding friendship with China and the CPEC complement this vision of peace for ourselves and for others, and shared prosperity and common development for our region and the world."

The prime minister said that Pakistan and China are ‘iron brothers and support each other on issues of respective core interests. "In an era of complex and profound changes at the global and regional level, our ‘all-weather strategic cooperative partnership’ remains a strong anchor for peace, progress and prosperity.

He said that the year also marks the 70th anniversary of the establishment of diplomatic relations between Islamabad and Beijing. "Our two nations are celebrating this historic milestone in a befitting manner. I am confident that the year 2021 would provide new vigour and vitality to our time-tested friendship," he concluded.

Pak-China body to include provinces