A 'new day' in Israel after Netanyahu unseated

Dog, two cats rescued from the bottom of a well

The aim of the exercise was to enhance interoperability and further strengthen bilateral relations between two navies, the press release further stated.

"The exercise included maritime interdiction operations, cross deck landings and various other serials which will enhance professional competence of men onboard and enhance cooperation among ships deployed in the region," the communique added.

PNS Saif is presently on a Regional Maritime Security Patrol (RMSP) deployment in the North Arabian Sea and the Gulf of Aden and is visiting Duqm, Oman in pursuance of cordial relations with regional countries. 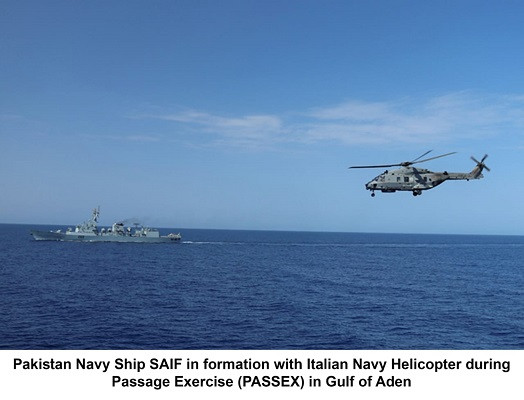 "Pakistan Navy has always remained committed in maintaining regional peace and security in the Indian Ocean Region and PN Ships are regularly deployed for conducting Maritime Security Operations in Gulf of Oman, North Arabian Sea and Gulf of Aden," the communique stated.

The service's media wing further stated that the participation of PN in bilateral and multilateral exercises was a manifestation of the Pakistan Navy's resolve to contribute effectively in the maintenance of peace, stability and order in the region.