Retail giant Zara has recently come under fire and is facing calls for a boycott after a designer for the Spanish clothing brand was caught spewing anti-Palestinian rhetoric.

Vanessa Perilman, the head designer for Zara’s women's department, allegedly made the controversial comments in a message responding to pro-Palestine posts by a model who later shared Perilman's message on Instagram. "Maybe if your people were educated, they wouldn't blow up hospitals and schools that Israel helped to pay for in Gaza," Perilman allegedly wrote to Qaher Harhash, a Palestinian model from occupied east Jerusalem. 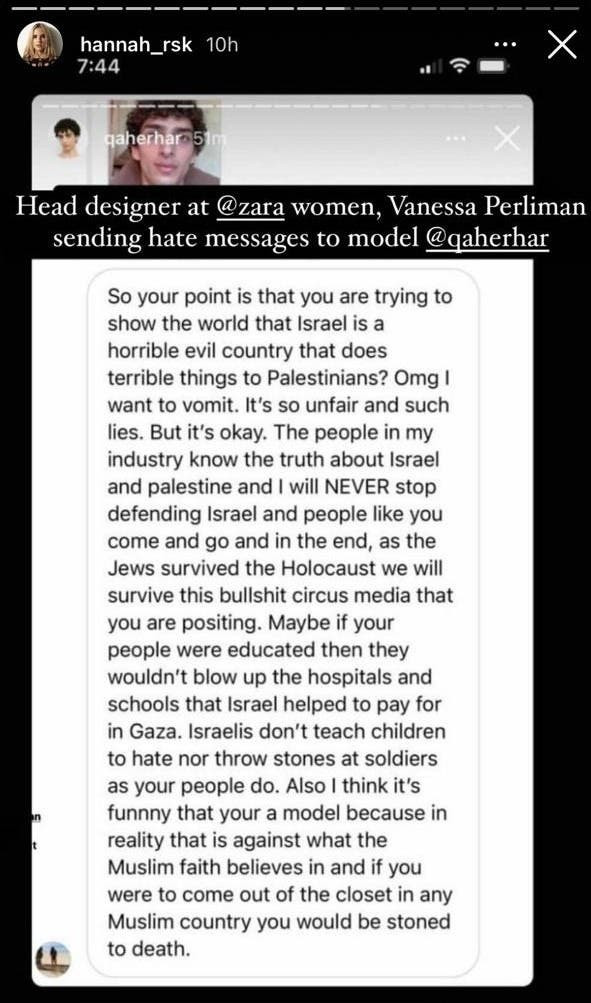 Several healthcare and education facilities were hit by Israeli airstrikes last month during a brutal bombing campaign that killed more than 250 Palestinians, including 67 children, in the besieged Gaza Strip.

"Israelis don't teach children to hate, nor throw stones at soldiers as your people do," Perilman went on, as per the screenshot revealed by Harhash. "The people in my industry know the truth about Israel and Palestine and I will never stop defending Israel. People like you just come and go in the end. Maybe if your people were educated then they won't go and blow-up schools and hospitals that Israel helped to pay for in Gaza.”

Perilman has since deleted her Instagram account and other social media pages amid a widespread backlash that has also seen pro-Palestinian advocates complain to Zara. "It was obvious she apologised because she felt threatened by people messaging her and calling out her ignorance," Harhash wrote on Instagram on Sunday. "So far, Vanessa Perilman hasn't been fired." 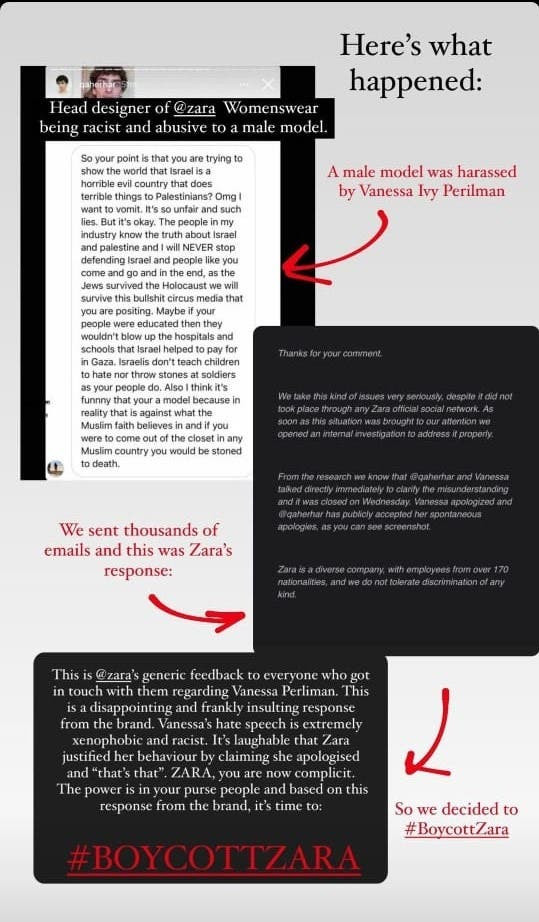 The Jerusalem-born model went on to say the Spanish high-street brand had asked him to share an apology written by Perilman, which he declined to do. "If Zara wants to make a statement with me, they also need to address Islamophobia," Harhash maintained. "When certain fashion designers said anti-Semitic things, they were fired from their jobs," he added.

Many called out the brand for not addressing the issue more publicly. A user shared that she emailed Zara for a statement too and the brand took a rather casual approach to her request. "Vanessa Perliman, a head designer at Zara, DM-ed a young Palestinian model this racist garbage and when she was called out, gave a lukewarm apology before deleting all her social media. I emailed Zara to demand that disciplinary action be taken and this was their dismal response."

Vanessa Perliman a head designer at Zara DM’d a young Palestinian model this racist garbage and when she was called out gave a lukewarm apology before deleting all her social media. I emailed Zara to demand that disciplinary action be taken and this was their dismal response. pic.twitter.com/eCJ6FUei2u

Many social media users are livid. "So apparently, Zara's Head Designer Vanessa Perilman was caught being Islamophobic and abusive about Palestinian people? Zara, if this is true and all you did was basically nothing because she didn't use your own branded social media account, that is a cop-out."

Another disgruntled fan wrote, "Absolutely disgraceful! Backing these types of comments from your designers? No wonder the standards of your clothing has dropped! The company needs to educate itself and its staff!"

@ZARA absolutely disgraceful! Backing these types of comments from your designers no wonder the standards of your clothing has dropped! The company needs to educate itself and its staff! #FreePalestine #zaramustapologize https://t.co/eLtNwPE1zb

Harhash himself has called on followers to boycott the brand using the hashtag #BoycottZara. Zara has yet to publicly comment on the controversy, although social media users have shared screenshots of an emailed statement from the retailer claiming the "misunderstanding has been clarified and closed.”

Islam Makhachev submits Thiago Moises in Round 4 at UFC

Is there anybody out there?