At least 20 killed as bus falls into gorge in Khuzdar

After appearing on a local talk show with host Vasay Chaudhry, the super model was called out for her insensitive and disrespectful remarks by popular trans actor and model Kami Sid, as well as anchor Rabia Anam. She was also schooled by numerous users on social media, despite having revealed her body dysmorphia.

Now, popular VJ and host Mathira, who’s been commenting on numerous social issues lately, has shared her two cents on Ali’s remarks. And instead of channeling her anger into her response like everyone else, Mathira has urged the public to take it easy with Ali.

Writing on her Instagram stories, Mathira said, “I don’t know why words like ‘khusra’ or ‘maasi’ are used to insult someone. They’re not swears, please. Iman is a very pretty lady and she needs help mentally. But to all the people, don’t use these words like swears; it’s not right.” 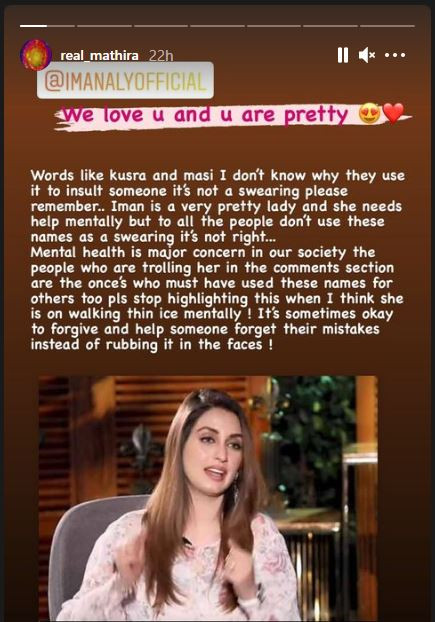 She went on, “Mental health is a major concern in our society and the people who are trolling her [Aly] in the comments section are the same people who must have used these terms to insult others too. Please stop highlighting this when it’s evident she is walking on thin ice mentally.”Mathira asserted that sometimes, it’s okay to forgive and help others forget their mistakes instead of rubbing them in their faces.

Shedding light on her body image issues and her inability to accept compliments during her interview, Aly had said, “People tell me I'm good-looking, but when I stand in front of the mirror I feel everyone is lying.”

Using a rather prejudiced and questionable language, she opened up about her inability to take pictures of herself. "I can't even take pictures of myself. Whatever angle I try, I think 'aye haye, khusra'. People should try to understand that not everyone is supposed to love themselves like I don't like the way I am, which is why I don't take selfies and am not very active on Instagram," she added.

There is no denying Aly's comments reflected her low self-esteem, but they also reflected her sheer ignorance, which would eventually influence the impressionable minds of society who look up to public figures for inspiration. Her confessions are certainly an admittance of her inability to love herself, and a vulnerable person like that should not be trolled and cyber-bullied into hating themselves further. Still, celebrities need to introspect and most importantly, think before they speak on public platforms to ensure they don't hurt the sentiments of any community while voicing their struggles.