Infrastructure projects get 63% of PSDP

The National Economic Council (NEC) on Monday approved Rs2.1 trillion for the national development outlay, as the federal government allocates nearly two-third of its budget for infrastructure projects to satisfy unhappy parliamentarians and meet national needs.

The meeting of the NEC – the constitutional economic decision making body, was marked by agitation by the Sindh chief minister over what he called “unjust treatment” being meted out to his province in allocations of budgetary resources.

The NEC approved Rs2.1 trillion national development outlay, which is higher by Rs535 billion or one-third over this year’s original budget.

The four provinces will spend Rs1.235 trillion from their own resources while the federal government has allocated Rs900 billion for the federal Public Sector Development Programme (PSDP). The proposed federal PSDP is higher by Rs250 billion or 38% over this year’s original budget of Rs650 billion.

The Pakistan Tehreek-e-Insaf (PTI) seems to be changing its course and has adopted a strategy in allocation of the development budget, which was the hallmark of its arch political rival – the Pakistan Muslim League-Nawaz (PML-N).

It has allocated 63% of total PSDP or Rs565 billion for infrastructure sector, according to the Ministry of Planning summary for the NEC. The health sector got only Rs30 billion or 3.3% and education sector Rs50 billion or 5.5% of the federal development budget.

The parliamentarians schemes have been given Rs68 billion but for Covid-19 Rs5 billion have been earmarked for next fiscal year. The agriculture sector has been given Rs12 billion or 1.3% of the budget.

Within infrastructure, proposed allocation for transport & communication sector is Rs307 billion or 34% of the total size. However, the Prime Minister Office’s handout showed the transport sector allocation at Rs244 billion.

The Rs900 billion federal PSDP was equal to just 60% that the ministries had demanded for development activities for this fiscal year. The Ministry of Planning informed the NEC that ministries sought an allocation of Rs1.5 trillion. However, in its APCC summary, the planning ministry had showed demand at Rs2.5 trillion.

The government has approved 72% or Rs648 billion resources for ongoing projects and 28% new approved schemes.

Sindh Chief Minister Syed Murad Ali Shah complained that Sindh had been given only Rs1.5 billion while Punjab had been allocated Rs44 billion for provincial projects that are financed by the federal government.

Prime Minister Imran Khan maintained that no discrimination was meted out to Sindh in allocation of resources. 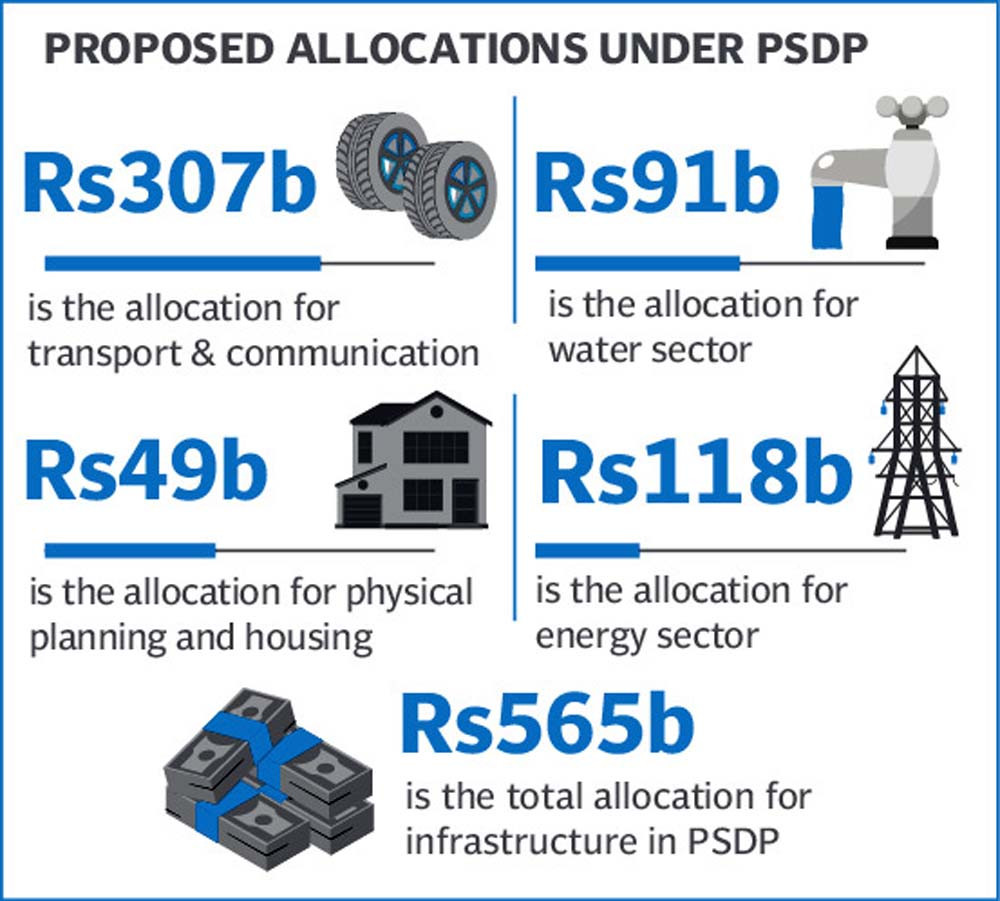 For the outgoing fiscal year, the government had allocated Rs650 billion under the PSDP. “An expenditure of Rs422 billion was reported as of June 3, 2021,” the NEC was informed. The planning ministry maintained that it is expected the entire allocated funds of Rs650 billion would be utilised by June 30, 2021.

However, the Rs422 billion utilisation was 65% of the total budget and the planning ministry is unrealistically expecting to spend Rs228 billion at a rate of Rs8.4 billion per day in the remainder period of this fiscal year. The utilisation of development funds remained on average at Rs1.24 billion a day during this fiscal year.

The planning ministry informed the NEC that it allowed inter and intra sectoral adjustment to the tune of Rs127 billion to various projects primarily to fast track projects implementation and support high impact initiatives.

The PTI government has included Rs1.8 trillion worth three special packages in the next year’s financing plan but has made a mere allocation of Rs65 billion or 3.6% of the needs, suggesting that these politically motivated projects will take years for completion.

The federal government has formulated an accelerated development plan for southern Balochistan, in consultation with the military, at an estimated cost of Rs601 billion for the execution of 199 projects. But an allocation for Rs20 billion has been earmarked in PSDP 2021-22 for new projects, which is just 3.3% of the needs.

For the Karachi Transformation Plan of Rs739.2 billion, the government has proposed Rs25.4 billion in PSDP 2021-22.

The Ministry of Finance has been given Rs123.1 billion, largely for financing provincial projects, which is higher by Rs56 billion or 85% over this year. The Higher Education Commission will get Rs42.5 billion – up by Rs13 billion or 44%.

The Pakistan Atomic Energy Commission has been allocated Rs27 billion or Rs3.7 billion higher than this fiscal year.

The water resources ministry will get Rs103 billion – up by Rs21.7 billion or 16%. The Diamer-Bhasha dam will get Rs15.5 billion for construction and another Rs7 billion for land acquisition and resettlement of the affected population. Mohmand dam has been given only Rs5.5 billion for the next fiscal year.

The Pakistan Railways has been given Rs30 billion – also higher by Rs6 billion or 25%. But the Mainline-I project of the China-Pakistan Economic Corridor (CPEC) has been given mere Rs6.2 billion for the next fiscal year, indicating that the PTI government does not have a plan to start work on the strategically important project even during fourth year in power.

The National Highway Authority (NHA) budget has been reduced by Rs5 billion to Rs113.8 billion. The National Transmission & Despatch Company (NTDC) will receive Rs69.5 billion – higher by Rs30 billion or 75%.

The Covid-19 budget has been drastically reduced from Rs70 billion to just Rs5 billion – a reduction of 93%.

Rs96b reserved in next budget for MPs' projects

Govt to increase PSDP to Rs900 billion in upcoming budget

Federal budget to be tabled in NA on June 11

Sindh not getting its fair share in budget: Murad

Govt to increase PSDP to Rs900 billion in upcoming budget