US completes up to 25% of troop withdrawal from Afghanistan

After nearly two decades of engagement in Afghanistan, foreign troops began retreat on May 1

Reports finds that only 60% of national troops and weapons nominally available to NATO are in a fit state to be deployed. PHOTO: REUTERS/FILE
KABUL:

As violence continues to surge across Afghanistan, the US has completed nearly 25% of the exit process in terms of troop withdrawal, handing over or destroying its equipment in the war-ravaged country.

After nearly two decades of engagement in Afghanistan, the foreign troops began the retreat on May 1.

According to the NATO-led Resolute Support Mission in Afghanistan, the exact details of the departure plan for an estimated 9,592 foreign soldiers will not be announced at this time.

“As we draw down, certain equipment must return to coalition home countries. Equipment which is not required to be returned, when we are able to, will be turned over to our ANDSF (Afghan National Defense and Security Forces) partners to leave them as best equipped and in the best posture as we can as we depart,” the alliance’s press office told Anadolu Agency.

The US Department of Defense (DoD) has also engaged its nuclear-powered aircraft carrier the USS Dwight D. Eisenhower in the Arabian Sea and six B-52 bombers based in Qatar to support the exit of the US and coalition forces from Afghanistan. By May 24, the Eisenhower had conducted over 600 flight operations in the last week alone that aided the drawdown, it said.

To preserve operational security, the DoD has said it will only be providing an approximate range of the percentage of the exit process that is complete.

As of May 24, 2021, according to the US Central Command, the Defense Department has retrograded the equivalent of approximately 160 C-17 loads of material out of Afghanistan and has turned over more than 10,000 pieces of equipment to the Defense Logistics Agency for disposition.

Similarly, Washington has so far officially handed over five facilities to the Afghan Ministry of Defense that were previously under the control of NATO-led forces in the country.

Five bases handed over to Afghans

Among the five military bases previously being used by foreign troops, the change of the guard at Kandahar Airfield remains the most significant in terms of its capacity and clout. At its peak, the military facility in the restive south served nearly 30,000 foreign troops. The Afghan Defense Ministry last week confirmed taking charge of the airfield from US troops.

The handing over of such key bases began on May 1 when US troops in Afghanistan formally handed over the key Leatherneck Base in the southern province of Helmand to Afghan forces. Afghanistan's Ministry of Defense released images of the changing of the guard during a ceremony attended by key commanders from both sides in the province ravaged by insurgency. It said in a statement that this facility would serve as a bastion for the elite forces of the Afghan army.

US and British forces vacated several bases in the south of the country following the end of the combat mission in 2014 when the NATO-led Resolute Support Mission began and Afghan forces took charge of nationwide security. However, US forces returned to Helmand to push back mounting Taliban offensives in 2018.

The bases handed over to Afghan forces since 2015 include Camp Bost, Forward Operating Base Gamberi, Tarin Kowt in Uruzgan province, and Forward Operating Base Lightning in Paktia. Others closed during the period include Jones in Kunduz, DeAlencar in Nangarhar, Shaheen in Balkh, Bishop in Kabul, Maymana in Faryab, and Qalat in Zabul. Nangarhar Airbase and Bagram Airbase remain under the control of the US. 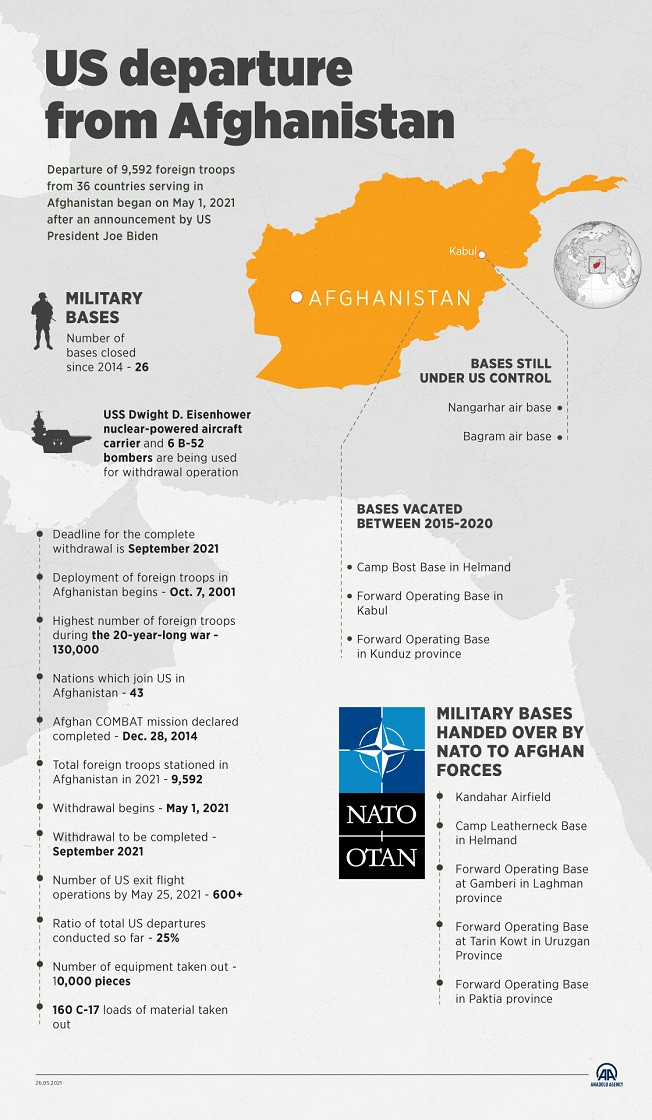 Since 2015, according to the Resolute Support Mission, a total of 9,592 troops of 36 nations were stationed in the country, with the US topping the list with 2,500 soldiers.

Poland, Mongolia, Portugal, the Netherlands, Norway, Denmark, Armenia, Azerbaijan, Bulgaria, and Denmark are among the NATO allies and partners with at least over 100 soldiers as part of the Resolute Support Mission in Afghanistan.

In January this year, the Turkish army took the lead of NATO’s Very High Readiness Joint Task Force (VJTF), placing thousands of soldiers on standby, ready to be deployed within days. Units from Albania, Hungary, Italy, Latvia, Montenegro, Poland, Romania, Slovakia, Spain, the UK, and the US will also serve on the force, which is part of the alliance’s larger NATO Response Force.

US Colonel Scott T. Yeatman heads the crucial Train, Advise, Assist Command-Air. The mission of TAAC-Air is to train, advise and assist Afghan partners to develop a professional, capable and sustainable air force in Afghanistan. Among the contributing nations are Australia, Croatia, the Czech Republic, Denmark, Germany, Greece, Hungary, Romania, Slovakia, Sweden, Turkey, the UK, and the US.

In line with US President Joe Biden’s announcement, all American troops will depart from Afghanistan by mid-September this year, coinciding with the 20th anniversary of the terrorist attacks on Sept. 11, 2001, on New York City and Washington, D.C.

The deployment of foreign troops began in Afghanistan on Oct. 7, 2001, when the US together with the UK launched Operation Enduring Freedom. They were joined by some 43 NATO allies and partners after the UN authorised the International Security Assistance Force (ISAF) on Dec. 20, 2001. At its peak, there were an estimated 130,000 foreign troops in Afghanistan. This mission was declared completed on Dec. 28, 2014, with the size of foreign troops drastically reduced and combat operations by all members almost entirely ended with the exception of the US.

Army hopes Afghan soil will not be used against Pakistan, reiterates support for peace